Mandy Norrish stood at water's edge at low tide, peering through binoculars at a cluster of people about 500 metres away, digging for clams between seaweed-covered rocks.

She momentarily panicked as a young man raced by. She wrapped herself a bit tighter in the red windbreaker that was supposed to disguise her official fisheries department uniform, and called colleagues on her cellphone, trying to figure out if the young man spotted "the heat" - enforcement officers who were closely monitoring the group.

The young man spoke to one of the clammers while everyone else kept on working. He then wandered down the beach. Ms. Norrish relaxed. Later that morning, last Thursday, as the clam diggers headed back to their van, they were arrested with 63 kilograms of illegal shellfish.

The waters in the entire Lower Mainland have been closed to clamming for 40 years this summer. Oysters, clams and mussels from the area are seriously contaminated with bacteria from human and animal sewage, toxins from motor oil, pesticides, fertilizers and viruses such as hepatitis A and salmonella. Eating contaminated shellfish could cause serious illness. Cooking does not destroy the toxins.

However, the tide cycles this month are in prime time for summer clamming. Low tide in mid-morning opens up wide expanses of stony beaches and tidal pools teeming with shellfish. Enforcement officers are patrolling the beaches, anticipating they will likely find clam diggers whenever they go looking.

Despite signs plastered along the beaches, many people continue to go clamming. The majority take them for family and friends. Some are selling the shellfish at the back door of local restaurants, fisheries officers say.

A recent arrival from Vietnam was caught in the summer of 2008 with 8,000 manila clams weighing around 225 kilograms. The stash was worth $3,000. "We have no doubt, given that amount of clams, that they were going to be sold somewhere," field supervisor Neil Jensen said in a recent interview. "And they were all bad."

The clam digger was sentenced to 30 days in jail after he said he had no way of paying a $10,000 fine. His vehicle was forfeited.

Another clam digger with a sizeable stash was stopped near the water after speaking on his cellphone. The call, according to the cell's directory, was to a local restaurant.

"The problem is gigantic. Pretty well any day we go out there, we find someone and can charge them," Mr. Jensen said.

The fisheries department does not have the resources to track where the clammers market their product, and Vancouver Coastal Health authorities say they have not heard of any shellfish harvested this summer reaching a Vancouver restaurant. But the evidence often points to a commercial enterprise. "We don't want it to get to the restaurants," Mr. Jensen said. "We get them before [the shellfish]gets there."

Occasionally, the fisheries officers, who are armed, have been overwhelmed by the clam diggers.

Kirk McCrae, another field supervisor, recalled an incident in which three officers on patrol encountered a group of 12. The leader "was all tattooed up," Mr. McCrae said. His neck muscles started pulsating wildly as the officers confronted him. Others in the group started picking up rocks. The fisheries officers retreated and called White Rock RCMP. But the clam diggers had dispersed before police arrived.

Four fisheries officers were involved in the arrest of the group last Thursday. Considerable effort went into co-ordinating surveillance, tracking each member of the group and deciding on tactics for making the arrests. "We want to get them loading the car," Mr. McCrae said. That allows authorities to clearly link the clam diggers to the car and whatever else is found inside the vehicle.

The diggers had their own tactics to avoid detection. They split into two groups to leave the beach. As three reached the road, a man in his mid-20s jumped into their van and started to speed away, possibly to see if they were being watched. And they were. A fisheries officer turned on the flashing lights in his vehicle and pulled him over. He was handcuffed, then officers went back to a young man and woman who were left by the beach trail and frisked them.

The second group of diggers spotted Ms. Norrish as they headed off the beach with their catch. They suddenly dashed into a nearby forested area. They were detained moments after they emerged. Mr. McCrae told them RCMP dogs could be called in to search for the missing clams. A woman in the group decided to co-operate, retrieving shellfish that had been abandoned.

When they were arrested, all but one had California ID, and they said they had collected the 63 kilograms of shellfish for themselves. The enforcement officers issued notices requiring them to appear in B.C. Provincial Court on Oct. 16. They will likely face fines of $1,000 to $3,000 each, based on recent court penalties for first-time offenders. 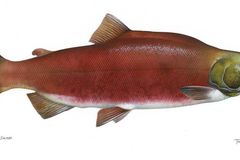 There are lots of fish in the sea. But the tastiest ones come from Nova Scotia
June 18, 2010 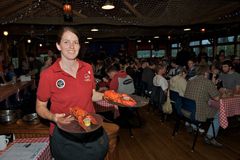