Of all the central messages B.C. Premier Christy Clark could have gleaned from this week's shocking election result, a desire by the public to see the province's political parties work across partisan lines would not have been on most people's list.

But that is what Ms. Clark said she took from the vote, which, for now has placed her Liberal government in a minority situation, at the mercy of Andrew Weaver's three-seat Green Party for its survival. Yes, tens of thousands of votes are still to be counted, and the political math could change, but right now the Liberals face the uncomfortable prospect of having to compromise on a number of policy fronts, something that does not come naturally to them.

In fact, the notion that the Liberals might have to listen to the views of others, might have to consider legislation that is not solely designed to give them some perceived electoral edge, must be an absolutely gut-wrenching and terrifying thought for Ms. Clark and those of her MLAs who survived Tuesday's purge.

Read more: BC Liberals win minority government: What happened and what comes next

But as much as the next couple of weeks, and months, could be a stomach-churning period for the Liberals, it could be equally so for Mr. Weaver and his party. Or is that Dr. Weaver? Ms. Clark bestowed that honorific on the climate-scientist-turned-politician during the first leaders' debate of the campaign. It was jarring.

Ms. Clark does not do anything without considering its political implications. I have no doubt that her decision to call the Green leader Dr. Weaver was fully intentional; it not only elevated him over NDP Leader John Horgan, it also played to an academic's ego. Who knows when that might come in handy, say, when you end up in a minority situation and need the Greens' help to survive.

But this is where things get exceptionally dicey for Mr. Weaver. The way ahead is a minefield. History is littered with the carcasses of political parties that decided to buttress unpopular governments in minority situations and paid a price for it at the polls the next time.

It might be instructional, for example, to call Nick Clegg, the former leader of Britain's Liberal Democrats, which entered into a coalition in 2010 with David Cameron's disliked Conservative Party. In the next election, furious voters took out their wrath on the Liberal Democrats, reducing the party to eight seats from 57.

Mr. Weaver has often been a harsh critic of Ms. Clark, especially when it comes to her failed leadership on the environment. The fact she is now trying to use her call for a ban on U.S. thermal coal exports through B.C. ports (in response to U.S. softwood tariffs) as evidence she is some great protector of the planet is laughable.

B.C. became an environmental laggard under Ms. Clark's leadership and completely ignored the recommendations of its panel on climate change. The province is going to miss all of its greenhouse gas emission targets, now and into the future, in the estimation of the Pembina Institute and others. But now we're supposed to believe Ms. Clark wants to save the earth for future generations.

Maybe save her party from political purgatory is more like it.

Mr. Weaver would be well advised to tread cautiously. No one campaigned harder against the status quo than his party. How would supporters view the sight of their leader propping up a government that has already been in power for 16 years? How could Mr. Weaver justify that, especially given that the Greens have far more in common with the New Democrats on the policy front than they do with the Liberals?

Perhaps Mr. Weaver does not like John Horgan. Perhaps he finds his temperament a turn-off. Fine. But that should not be a factor in who he and his party choose to support. He could even be enticed by a seat at Ms. Clark's cabinet table. That would be political suicide. Green backers would desert the party in droves.

It is likely that the Liberals will offer the Greens official party status, which comes with extra funding and is usually accorded to parties with four seats or more. The Liberals would likely have done this even if they had won a clear majority; anything to help the Greens damage the NDP.

And make no mistake: That is how many are interpreting this election result. The Greens prevented the NDP from claiming victory – and there has to be some reward from the Liberals for doing that.

Of course, we could be talking about another scenario altogether in a couple of weeks. B.C. has never experienced anything quite like this before, and the stakes could not be higher for the three political parties involved.

BC Liberals cut to minority with Greens holding balance of power
May 10, 2017
BC Liberals win minority government: What you missed on election night
May 9, 2017 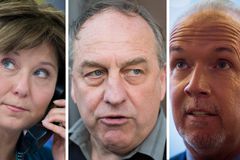 Minority government thrusts B.C. Greens into centre of power
May 10, 2017
Follow Gary Mason on Twitter @garymasonglobe
Report an error Editorial code of conduct
Due to technical reasons, we have temporarily removed commenting from our articles. We hope to have this fixed soon. Thank you for your patience. If you are looking to give feedback on our new site, please send it along to feedback@globeandmail.com. If you want to write a letter to the editor, please forward to letters@globeandmail.com.
Comments