The first warning came midafternoon on a Thursday in late October, from a client at a downtown Victoria HIV/AIDS and harm-reduction facility.

It was the day after "cheque day," when social-assistance payments are issued in B.C. – a period linked to an increase in overdoses and other related harms. But even with that factored in, front-line workers were getting the sense that things were worse than usual.

At AIDS Vancouver Island (AVI), a client relayed a warning from a police officer who reported seven overdoses in just 30 minutes. Paramedics responding to AVI's overdose-prevention site moments later said they had attended even more.

AVI staff passed the worrisome accounts on to Heather Hobbs, the organization's manager of harm-reduction services.

"We have definitely seen increases in overdoses related to other cheque weeks, but hearing about that many overdose calls downtown in such a short time frame felt particularly concerning," Ms. Hobbs recalled in an interview.

Within 90 minutes, staff e-mailed other Victoria service providers, overdose-prevention site operators and the Vancouver Island Health Authority's harm reduction coordinators. They also posted an alert to AVI's Facebook page: "We have just responded to an overdose here at our Victoria office (person is okay) and paramedics and police are reporting MULTIPLE and ONGOING overdoses happening today," the Oct. 26 post reads. "Please, if you can, go to an Overdose Prevention Site (OPS) if you are going to use substances."

These warnings would be the first of several issued over the three days when front-line workers on Vancouver Island and across B.C.'s Lower Mainland observed spikes in overdoses notable, even on a cheque week, several years into an unprecedented overdose crisis. In Abbotsford, five people would die in the span of nine hours.

While word-of-mouth warnings aren't new, they have taken on an elevated importance in the time of fentanyl, when "bad dope" that kills scores in a single day is not just a possibility, but an inevitability. Timely reports from people on the ground have become so valuable that one health authority has created a text-based warning system in an effort to harness them.

Drug-analysis data obtained later by The Globe and Mail show that these late October days coincided with the arrival in B.C. of yet another deadly fentanyl analogue, a drug chemically similar to fentanyl. This analogue has been implicated in numerous deaths in the United States. But in those few frantic days, as one person after another overdosed, the crucial warnings spreading across the province originated from drug users themselves.

"Everybody was seeing something," Dr. Stanwick said. "One wonders if this is a coalescence of more carfentanil, or fentanyl, on the streets … and maybe there was also a more noxious product, in greater numbers."

The following day, a Friday, the health authority issued two alerts, advising of an increase in overdoses in both Victoria and Campbell River.

"The coroner's service eventually confirmed a couple of days later there were probably two deaths associated with this event as well," Dr. Stanwick said. "They had come to the coroner's attention after we had put out the alert."

Around the same time, a client at the Atira Women's Resource Society in Vancouver told staff about "toxic down," or tainted heroin, in the city's Downtown Eastside. Details were limited, but staff forwarded the report on to Vancouver Coastal Health (VCH), which then issued an alert via Twitter and in an e-mail to staff and relevant service providers.

"Reports of toxic down from multiple #DTES dealers," read the tweet. "Don't use alone. Check your drugs. Please use our services."

Tim Gauthier, a nurse at Insite, said he most values alerts on social media, where people can ask questions and contribute to a conversation. "Part of why I like the social-media ones more is because often [an official warning] will say, 'Toxic heroin, it's green, it looks like a pebble.' But it doesn't really say what's happening with it, like if it's causing psychedelic features, rigidity, if it's just stronger than other opiates. That's what I'm interested in and that seems like what people I work with want to know too. What social media has is that back and forth."

The Vancouver health authority also viewed the report as an opportunity to engage people who had signed up for its nascent Real-time Drug Alert & Response (RADAR) project, which allows people to both submit and receive drug alerts through text messages. Launched in July, the warning system currently has about 175 members.

At the office of the Vancouver Area Network of Drug Users (VANDU), an advocacy group, staff passed the warning on to every person using the facility's overdose-prevention site and told members at their daily meetings. The organization also posts notices on the office windows when there are reports of bad drugs in circulation, said VANDU vice-president Hugh Lampkin. "But usually, for down here, word of mouth is speed of light," Mr. Lampkin said.

By Saturday, the bad news got worse. Shortly after 8 a.m. Abbotsford Police issued a news release stating that five people had died after overdosing in the Fraser Valley city in the span of just nine hours the day before. This, after a week in which first responders and health-care providers there saw "dozens" of overdoses, wrote APD Constable Ian MacDonald in a warning distributed through a news release and on social media.

"The Abbotsford Police Department continues to warn people of the inherent dangers in the use of street drugs," he wrote. "Today, we are amplifying that warning and suggesting that the drugs currently on our streets are even more deadly than usual."

The coroner's reports for the Abbotsford deaths won't be known for some time, and the reasons for the non-fatal overdoses may never be known. But data provided to The Globe show that a new fentanyl analogue was detected in B.C. that last week of October.

LifeLabs – a laboratory testing company that analyzes fentanyl, fentanyl analogues and other synthetic opioids detected in urine samples of patients who are screened for fentanyl found that cyclopropyl fentanyl – was detected in about 7 per cent of fentanyl-positive tests that week. The synthetic opioid has been implicated in numerous fatal overdoses in the United States.

Further, the company noted that while some analogues, such as carfentanil, are usually found in trace amounts relative to fentanyl, "the estimated concentration of cyclopropyl fentanyl tends to be significantly higher and is often comparable to that typically observed for fentanyl."

Emergency-department and overdose-call statistics from Victoria, Campbell River, Vancouver and Abbotsford all showed a spike in overdoses, but one that was on par with other cheque weeks.

As of Sept. 30, more than 1,100 people have died of drug overdoses in B.C. Fentanyl was detected in 83 per cent of those deaths. 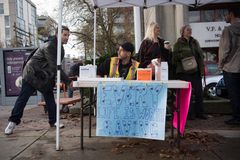 B.C. to bolster service to test drugs for fentanyl
November 9, 2017 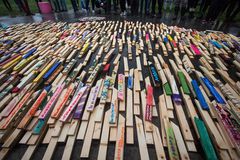