As a national inquiry into missing and murdered indigenous women gets under way, relatives and advocates in British Columbia, where cases such as that of serial killer Robert Pickton and the Highway of Tears have focused attention on the issue for decades, say the process must result in action instead of simply more talk.

The province had an inquiry examining the police investigation of Mr. Pickton and broader issues surrounding missing and murdered women that ended with a series of recommendations in 2012.

But those hearings were frequently criticized by aboriginal leaders and the women's relatives, and many have since complained that change has been slow. For example, the provincial government only recently acted to improve transportation along Highway 16, often referred to as the Highway of Tears, even though B.C.'s Missing Women Commission of Inquiry called for such improvements in 2012.

"This national inquiry needs to be done right," said Lorelei Williams, a community advocate whose aunt, Belinda Williams, went missing from Vancouver's Downtown Eastside in 1978, and whose cousin's remains were found on Mr. Pickton's property.

"We need accountability – there's no room for mistakes. Our indigenous women and girls' lives depend on it."

The arrest and eventual conviction of Mr. Pickton became a flashpoint for the issue of missing and murdered indigenous women in the province. He was convicted of killing six women, but the remains or DNA of 33 women, many of them aboriginal, were found on his property.

The province has also struggled to deal with the Highway of Tears, where at least 18 women and girls have vanished or been murdered. British Columbia has also had cases of other serial killers who targeted vulnerable women.

Ms. Williams and other members of the Vancouver-based Coalition on Missing and Murdered Indigenous Women and Girls spoke at a news conference on Wednesday morning after federal Liberal government announced details of the long-awaited national inquiry. The government named five commissioners, including B.C. Provincial Court Judge Marion Buller.

Coalition members cautiously welcomed the terms of reference released on Wednesday, which include orders for the commissioners to report on systemic causes of all forms of violence – including sexual violence – against indigenous women and girls in Canada, "including underlying social, economic, cultural, institutional and historical causes."

But they also expressed concerns, including fears that recommendations could go unheeded if the inquiry does not include strong procedures for tracking and enforcing recommendations, and that police actions would not be fully examined.

"We need to make sure that we all work together to get it right, we need to look at the issues of accountability," said Mary Teegee, director of child and family services with Carrier Sekani Family Services in Prince George.

Ms. Teegee also called on the inquiry to examine racism "in every level of government."

"That people could overlook thousands of missing and murdered Indian woman and it wasn't a national crisis until just recently – this is not an indigenous problem, this is not a women's problem, it's a Canadian problem that we need to work together to deal with, and this is a good first step," Ms. Teegee said.

Wally Oppal, who led B.C.'s Missing Women Commission of Inquiry, said he hoped the federal process would build on his findings.

"They can carry on from what we did. Particularly, they can get into some of the root causes of why these women are on the streets and what can we do to address poverty, drug addiction, health-care concerns, lack of educational opportunities. Those types of things are necessary," he said.

And he defended British Columbia's inquiry against criticism that it had not resulted in significant change, citing improved missing-person procedures and compensation for victims' families as just two of many benefits.

"Our report was called 'Forsaken' because nobody cared about [the missing women] and we did," he said.

British Columbia has agreed to authorize federal commissioners to look at areas that are in provincial jurisdiction, including child welfare and policing, B.C. Attorney-General Suzanne Anton said. She said the province is well-placed to bring perspective on systemic issues to the national table.

"We are in a different position in B.C.," she said. "I've been to national meetings, and we have far more to say about what we have done than other provinces do – and a lot of that stems from the missing women inquiry that was held in B.C. There may be things that have more impact in other provinces, where they haven't already gone down some of the roads we have gone down here in B.C."

Stewart Phillip, president of the Union of B.C. Indian Chiefs, echoed that concern before a meeting with Ms. Anton on Wednesday afternoon.

"This needs to go beyond provinces making vague statements that they support the inquiry, this must go beyond political cheerleading on the part of the provinces, we need their direct involvement, we are going to press the [Attorney-General] this afternoon on what that's going to look like," Mr. Phillip added.

The meeting – scheduled before the federal government revealed the launch date for its inquiry – included discussions about what B.C. could bring to the table based on its experience with the Oppal inquiry, Ms. Anton said.

"They [coalition members] want concrete and positive actions coming out of this, and so do we," Ms. Anton said. "I want to see something come out of this that helps people – that solves some of the problems that it's out to solve." 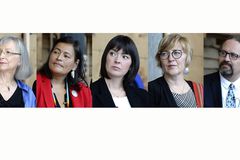 The Taken: Five women, five serial killers and how their paths came to meet
June 19, 2017
Families feel shut out after draft mandate of missing, murdered inquiry leaked
May 16, 2018 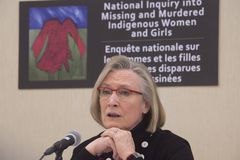