Hundreds of senior managers and nine executives at BC Ferries will get to keep their pay packages, but with greater strings attached, the corporation announced Wednesday, hours before the Transportation Minister announced some routes will be cut.

The changes mean the bonuses paid to executives and 400 senior managers will disappear and instead will become part of their salaries. However, those affected won't see the extra money unless they meet specified targets, BC Ferries said in a statement.

The changes were a response to a call from Transportation Minister Todd Stone, who had demanded an end to the controversial system. The B.C Liberal government has been under fire over the bonuses, which recently prompted an exasperated Premier Christy Clark to promise change.

Once implemented, salaries for affected executives and managers will be frozen until 2016, BC Ferries announced. Mr. Stone said the new approach will cut between $900,000 and $1 million in BC Ferries compensation costs and that he expected the savings could be directed into operations.

"The optics of the bonus plan as it was presented a number of months ago just didn't fit with what we felt it should be," he told reporters on Wednesday.

Donald Hayes, the BC Ferries board chair, defended the bonus program in a statement, suggesting it had driven significant results. But the new approach will be adopted at Mr. Stone's request.

Things came to a head amid word bonuses for some senior executives had nearly doubled. One executive vice-president saw his annual incentive pay increase by $62,710.

B.C. NDP Leader Adrian Dix accused BC Ferries of a "bait and switch" in which the corporation is adding the average of the bonus to the base salary – basically a salary hike.

"They are giving them the bonus and then holding it back," Mr. Dix told a news conference. "They are actually adding the bonus to the base salary. This is an interesting approach by the Premier, which is to pretend to take action and then do the opposite," he said.

Mr. Stone noted the timing of the fix, suggesting the company is making a sacrifice a week ahead of an announcement asking the public to make a sacrifice, with service reductions designed to ensure the sustainability of BC Ferries, which has hiked fares, but is facing reduced ridership.

"The final piece of this puzzle to ensure the long-term sustainability of BC Ferries is to focus on optimizing the services provided, so yes, there will be some service reductions. Those service reductions will be announced next week," he said.

Retroactive to April. 1, 2013, a portion of salaries for senior executives will be paid based on meeting targets set by the BC Ferries board. The approach applies to senior managers as of April 1, 2014.

Mr. Stone said the targets would vary by employees and might involve safety, on-time performance and employee satisfaction among others.

Bonus hold-backs are to be applied to a maximum base salary consisting of the base rate plus an average of the bonus they have received in the past four years.

The ferry corporation said current president Mike Corrigan's compensation has been capped since he became president in January, 2012, and he earns less than 60 per cent of his predecessor, David Hahn. He will be subject to the hold-back.

With a file from Mark Hume

Scroll down or click here for a breakdown of bonuses awarded to top executives in recent years.

BC Ferries has acted on provincial government demands make changes to how bonuses are awarded to the company's three top executives. Here is a look at the system being replaced:

Scroll down for more on the bonuses given to BC Ferries' three top executives.

With a report from Ian Bailey
Source: Statement of Executive Compensation, Aug. 16, 2013

Bonuses at BC Ferries a lingering issue 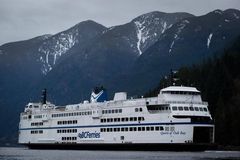 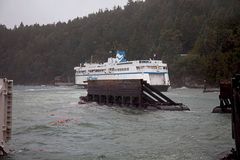