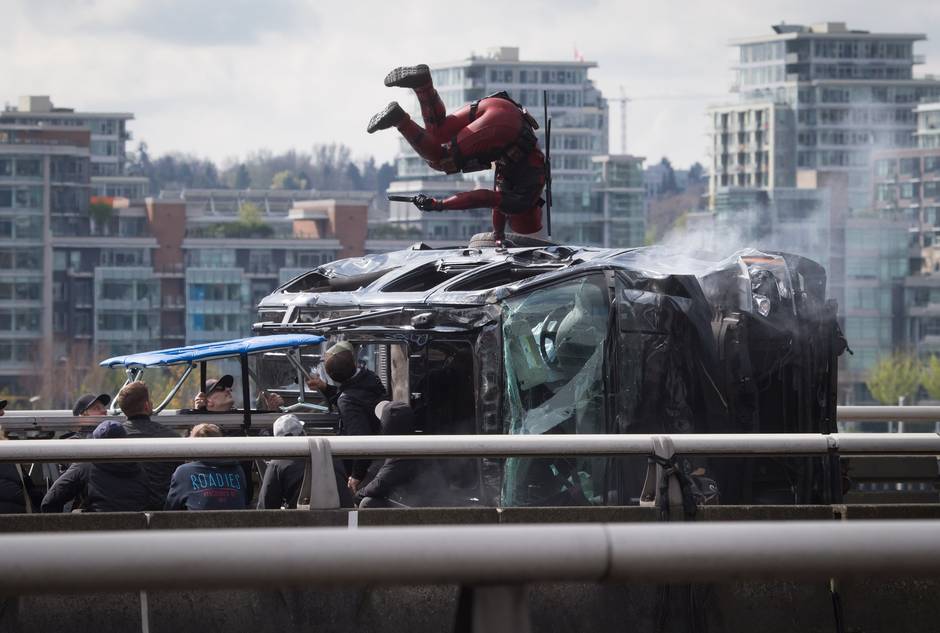 A stuntman dressed as Ryan Reynolds' Marvel Comics character Deadpool flips over a vehicle during filming of the movie Deadpool on the Georgia Viaduct in Vancouver, B.C., on Monday April 6, 2015. (Darryl Dyck/For The Globe and Mail)


It's been a banner year for B.C. film and TV production,
but as Ian Bailey reports, workers know it's a 'fickle industry'


A dozen years ago, Bill Morrill’s high-level carpentry skills earned him a career building sets for TV series and feature films, mostly saving him from having to work in housing construction or as a condo superintendent, the “real world,” as he puts it.

“I don’t like the real world,” Mr. Morrill, 59, said this week. “This is really a fantastic industry to be in. ... The best job in the world. The whole atmosphere. The creativity. The different things you build.”

Mr. Morrill has rarely looked back except when industry slumps forced him to. As recently as 2013, he spent six months in non-production jobs to pay the bills.

Nice work if you can get it

Wages for workers in the film and television industry are set through a series of collective agreements negotiated by their respective unions, either provincially or nationally. Here is a sampling of various jobs and their base pay in British Columbia:

These days, though, Mr. Morrill and an estimated 20,000 workers in B.C. – most on sets – have been able to steer clear of the real world, riding a wave that seemed unthinkable in 2013 when provincial government support for the industry became a major issue in the B.C. election. Now, B.C. jostles with Ontario as the Canadian leader for production.

TV series such as Arrow, Supernatural, The Flash and Fear The Walking Dead – a prequel spinoff on the popular series that is set in Los Angeles – are being shot in Vancouver along with six new episodes of The X-Files this summer. Star Trek 3 – the latest on the cycle of films launched in 2009 – is being shot in Vancouver this summer. Tron 3 looms. Both follow such films as Fifty Shades of Grey, Tomorrowland and the currently shooting X-Men-affiliated Deadpool, starring Vancouver’s Ryan Reynolds.

The most recent “In Production” list from Creative BC, an independent agency created by the province to promote film and TV production as well as other creative industries, lists 10 feature films, seven TV series – some shows are on hiatus and set to resume production soon – and 11 TV movies.

Film sector workers should be popping champagne. Instead, they’re more likely to be putting the bottle in the fridge for another day – a prudent gesture that reflects a sense of unease among workers that this boom will end.

“You make hay when the sun shines, as they say,” Mr. Morrill said. “You save your pennies while you work. It is, at times, very unstable.” 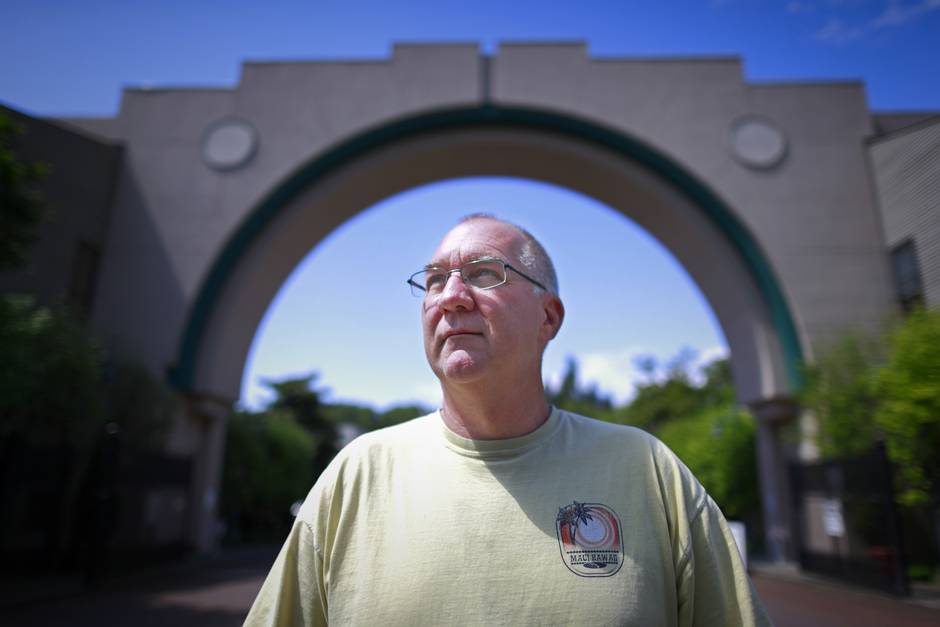 Bill Morrill, a scenic carpenter who works in the Vancouver film industry, stands outside the front gate of the North Shore Film Studios in North Vancouver May 14, 2015. (Jeff Vinnick/For The Globe and Mail)

The view reflects the precarious nature of the industry where you get a job on a feature film or TV series that can last weeks or months, then have to hustle to find another production to ride. That next job will only last so long. TV series are valued for the security of providing employment over however many seasons the particular series lasts.

Back in 2013, film sector workers were alarmed about rampant unemployment in their sector and declining studio rentals. Film and TV production spending declined to $1.4-billion in 2013-14 from $1.47-billion in fiscal 2012-13, according to Creative BC.

Statistics for 2014-15 are to be released soon, according to Creative BC president Richard Brownsey, and they are expected to add some dimension to the prosperity the industry is currently describing.

Peter Leitch, president of North Shore Studios and chair of the Motion Picture Production Industry Association, noted that big films can create up to 1,000 jobs. Carpenters may be called in months before the cameras roll to begin building sets, and then there are months of work to actually shoot the film.

This is far from 2013. At that time, hundreds of uneasy workers were attending rallies to call for more tax breaks to attract U.S. producers.

Premier Christy Clark dismissed tax breaks for the sector as a “race to the bottom” with other jurisdictions and declared taxpayers were being generous enough with the $285-million in incentives they financed each year. Finance Minister Mike de Jong suggested Ontario and Quebec should join B.C. to offer the same level of incentives so studios could not pit each province against the other.

Then the industry rebounded anyway.

Observers link the current prosperity to several causes. Some say the B.C. Liberals have, at least, been predictable in their tax incentive package, offering a reliable option for producers. According to the Finance Ministry, film and TV industry tax breaks have averaged $272-million over the past three years.

The Canadian dollar fell against its U.S. counterpart, which means American producers can get more production bang for their U.S. currency. Some note that other jurisdictions wooed producers with steep tax breaks, but lacked B.C.’s mix of crews, sound stages and expertise. The lobbying of 2013, others say, reminded decision makers in L.A. of B.C.’s value.

If a reminder was needed, there’s Deadpool and the viaduct. Last month, the City of Vancouver allowed Deadpool producers to shoot action scenes on the vital Georgia Viaduct, closing the traffic link out of the downtown core for hours of the day over 15 days.

“There’s a very small club of production heads,” says Peter Mitchell, president of Vancouver Film Studios. “They talk to each other and exchange stories about how things went poorly in one or another jurisdiction. I guarantee they all had a chat about how well it went in Vancouver on Deadpool.”

But some workers in the sector say the boom won’t last forever.

Wayne Bennett is a production manager who headed the Save BC Film organization that argued for deeper tax breaks back in 2013. The group is now dormant because everyone is too busy working, but Mr. Bennett says he is zealous about saving money to ride out hard times.

“When I was starting out in the nineties, it was always the plan to have three months worth of money in the bank to survive,” Mr. Bennett says. “Now that I have a wife and kids and stuff, I have eight months, 10 months worth of money in the bank because of the cyclical nature. It could be busy. It might not be busy and you have to cover those times.”

Lynda Chapple has been in the industry since an early 1990s gig as a location production assistant on the TV series Street Justice starring Carl Weathers – Rocky’s Apollo Creed. More recently, she worked on props for Tomorrowland. She says stashing money away to that degree would be a challenge.

“Most people I know that work in the business? That would be a luxury being able to save eight months worth of wages,” Ms. Chapple says.

Ms. Chapple says she has had to find other occupations when industry work has dried up. Over the years since she started, she has spent sojourns tending to her twins, studying journalism and working in broadcasting. She’s back now, but considering the sideline of launching an industry-related website to inform workers of job opportunities and other intel. She downsized from a house to condo to better manage her finances.

“I still can’t take it for granted that I am going to get a call because sometimes I don’t,”she says.

The B.C. boom is drawing 43-year-old Vance Vegas, a lighting director, back from Nova Scotia where he and his wife, a costumer, moved to escape the last slump.

“It’s a fickle industry,” Mr. Vegas says. “It will peter off eventually.

“We have experienced booms and busts several times. In the 2012 lull, a lot of people lost their homes. Friends of ours, at the very least, lost their cars and just weren’t able to survive.

“It’s a feast or famine industry.”