After saying for weeks that the amount of farmland being lost to carbon sequestration projects in B.C. is not a significant problem, the provincial government has written to the head of a foreign company suggesting that it indeed is an issue of concern.

British-based multinational Reckitt Benckiser has been buying farmland and replanting trees to sequester carbon, thereby taking the land out of agricultural production. But in a letter, the government has told the company it must get approval from the Agricultural Land Commission if it wants to register a covenant in B.C. that would allow it to trade carbon credits.

The covenant would force the land to be protected from future logging for 100 years. Farmers and ranchers in the Cariboo suggest that means the land would be out of agricultural production for that long.

But a company representative said in an e-mail Thursday that it is not trading in carbon credits, and has not registered any covenants on land in B.C.

"RB has not registered a covenant on title to the lands it acquired in British Columbia that would restrict the use of such lands."

She said the company is planting trees to offset emissions from its own global operations. "I want to be clear that RB does not buy, sell or trade credits through any established programs. Instead, Trees for Change is a program we have developed to meet our own internal targets for environmental sustainability," Ms. Kenney wrote.

Derek Sturko, deputy minister of agriculture for B.C., wrote on Wednesday to Rakesh Kapoor, the chief executive officer of Reckitt Benckiser, to advise him of B.C.'s concerns. He advised Mr. Kapoor that only 5 per cent of the provincial land base is suitable for agricultural production, and that the government established the agricultural land reserve (ALR) in the 1970s specifically to protect that land.

"The public concern which has been raised about RB's Trees for Change Programme is due to the perception that your company wishes to permanently remove land in the ALR from agricultural production," Mr. Sturko wrote. He referred to the Reckitt Benckiser website, on which the company explains it is reforesting land previously cleared for cultivation and that it is "committed to ensuring our trees remain in situ for 100 years."

Mr. Sturko said that while planting and growing trees is allowed on ALR land, "it is our understanding that if someone wants to restrict the agricultural use of land, such as purposely planting trees and then preventing trees from being removed for one hundred years, this would require a covenant." He cautioned the company that any such covenant would need to be approved by the ALC.

Lana Popham, agriculture critic for the NDP, said farmers in the Cariboo are alarmed so much arable land is being replanted to forest, and the practice needs to be stopped.

"There are many concerns. A major one of course is losing food-growing lands," she said. "[Local farmers] also feel this company is gutting their community. They are taking away economic opportunities. They are taking over properties. They are tearing down houses so they don't have to pay property tax. They are contributing nothing to this community at all and somehow they are benefiting from it through a carbon offset program." 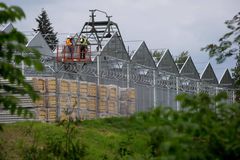