A months-long dispute is heating up between BC Hydro and a small group of First Nations and landowners who are protesting the construction of the $9-billion Site C dam.

The power utility has filed a notice of civil claim in B.C. Supreme Court, seeking an injunction that will prevent protesters from stopping work in and around an area on the south bank of the Peace River near Fort St. John, B.C.

The notice was filed on Tuesday, one day after the protesters issued a three-point plan calling for the temporary suspension of land-clearing operations, construction work and federal approvals.

The protesters also want further reviews of the project — and constitutionally protected Treaty 8 rights — by the BC Utilities Commission and the federal government respectively.

Named in the notice are Ken and Arlene Boon of the Peace Valley Landowner Association; Verena Hofmann, a former staff member of the Treaty 8 Tribal Association; Esther Pedersen of Fort St. John; Helen Knott of the Prophet River First Nation; and Yvonne Tupper, whose address and profession were not listed.

BC Hydro spokesman David Conway said Wednesday the power utility didn't file the action in response to the three-point plan.

"BC Hydro has filed a civil claim in relationship to a small number of individuals who are preventing contractors from undertaking some clearing work on the south bank of the Site C Dam site," he said.

He said BC Hydro is obligated to keep the project on schedule and on budget and hopes the situation can be resolved.

"BC Hydro has all environmental approvals, provincial permits and federal authorizations in place to work, to do the work that we are presently undertaking on the site," he said.

Ken Boon said protesters are a "little bit surprised" because BC Hydro indicated last week it wanted to talk.

"What they were doing behind the scenes with their lawyers and what they're doing publicly seem to be two separate things," he said.

"It seems like a show of intimidation," added Knott, adding she, too, was shocked that the notice was filed after BC Hydro indicated it wanted dialogue.

"We're still going to maintain our peaceful presence down at the camp, you know," she said. "It is Treaty 8 land, and as a treaty member I do have a right to be there and to continue to be there."

She said the protesters are now looking for legal counsel.

None of the allegations has been tested in court, but the notice said the protesters occupied a camp at Rocky Mountain Fort in November 2015 without the approval of the provincial government.

The camp is located at the site of a former North West Company fur-trading post established in 1794.

The notice alleged the protesters used helicopters to erect cabins at the site at the end of December and beginning of January.

Working in rotating shifts, the protesters interfered with and prevented BC Hydro employees and contractors from conducting work on the project, the notice said.

In one instance, protesters even built campfires near tree-felling and excavation operations, it added.

"The sole or predominant purpose of the blockading activities is to cause damage to BC Hydro's business operations, prevent BC Hydro from developing and constructing the project and injure BC Hydro," the notice said.

BC Hydro is seeking general and punitive damages, as well as costs.

The court action is not the first between BC Hydro and Site C protesters.

Several First Nations and local residents have filed legal challenges over the dam, raising concerns about flooding and the impact the lake will create. 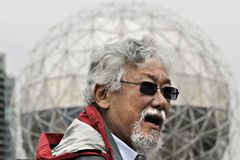