BC Hydro will test fish for mercury contamination this summer on the waterways connected to a massive hydro dam reservoir. The study is being launched in response to concerns raised by First Nations, who say their food fishery has been ruined.

The plan highlights how little has been done to understand potential health risks of mercury contamination stemming from the dam's construction in 1968. It has been 15 years since a sample of fish in the Williston reservoir was checked, and 25 years since fish in any of its tributaries were tested.

The Ministry of Environment has had an advisory in effect since 1992 urging limited consumption of fish caught in the reservoir.

However, members of the West Moberly First Nations and other aboriginal communities in the region continued to eat the fish they harvested upstream, believing there was no risk. On Monday, the West Moberly First Nations delivered coolers containing 90 kilograms of bull trout to the legislature, saying they have learned that their families cannot eat the fish due to elevated levels of methylmercury – the form of mercury that is of greatest concern to human health.

The small community – it has just 280 members – hired a consulting firm to examine the bull trout taken from the Crooked River, about 60 kilometres upstream from the reservoir. That study, released on Monday, showed elevated levels of mercury in the fish that have been a staple in the local diet. The bull trout are migratory and swim up the tributaries of the reservoir to spawn.

The Williston reservoir, the seventh-largest of its kind in the world, is a creation of the W.A.C. Bennett Dam. Many plants and trees were submerged, and the decaying matter is releasing mercury, which in turn finds its way up the food chain.

A compensation board dealing with the loss of fish and wildlife in the region as a result of BC Hydro's dam programs recently retained an independent consultant to look at the mercury issue. In a report in March, the firm recommended regular sampling of the fish starting this summer.

The report by the Azimuth Consulting Group concluded that long-standing concerns about mercury poisoning from the reservoir's fish are based on a failure to understand the risks. In particular, no work has been done to track where the local First Nations fish and how much they consume. Pregnant women, babies and toddlers are at the highest risk from mercury exposure.

The report concluded the province is ill-equipped to determine if there is a health risk.

"By contrast, many other provinces such as Saskatchewan, Ontario and Quebec have advisories on many hundreds of lakes due to mercury and have well-developed strategies and communication protocols to deal with this issue," the report noted. "Given that it has been more than 30 years since an advisory was placed, B.C. regulatory and health agencies have no experience with this issue and no established provincial process or existing decision-making framework to guide them."

Roland Willson, chief of the West Moberly First Nations, said on Tuesday he is not impressed by BC Hydro's plans to study the mercury levels. He said the damage is done and his community will not eat the bull trout any more.

What he wants now is to stop BC Hydro from building a third dam, Site C, on the Peace River.

"What we are trying to do is not make the problem worse," he said on Tuesday. "Only 30 per cent of the Peace River is left that we have access to, and they are going to flood half of that to build Site C. We want them to leave it alone."

He said BC Hydro has consistently played down the health risks, and he does not trust the company to ensure Site C would not create similar problems.

BC Hydro expects to begin construction of the Site C dam this summer, although it is facing several legal challenges, including one from the First Nations in the Peace River region. 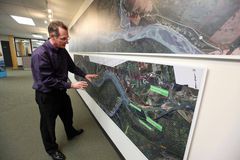 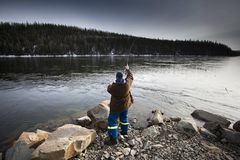