A B.C. man who spent nearly three decades behind bars in one of Canada's most egregious cases of wrongful conviction has been awarded $8-million in damages for the misdeeds of prosecutors during his original trial, despite the provincial government's years-long fight to block the lawsuit.

Ivan Henry, now 69, spent 27 years in prison after a wrongful conviction for sexual assault. The federal government and City of Vancouver settled the case with Mr. Henry last year, but the B.C. government, which was targeted because of the actions of provincial Crown prosecutors, did not.

The B.C. government fought to protect prosecutors from being found negligent, but the Supreme Court of Canada ruled in Mr. Henry's favour on that issue before his civil trial.

In a ruling released Wednesday, B.C. Supreme Court Chief Justice Christopher Hinkson said the Crown "seriously infringed" Mr. Henry's right to a fair trial and demonstrated a "shocking disregard" for his Charter rights when it withheld evidence that could have raised reasonable doubts about his guilt.

"If Mr. Henry had received the disclosure to which he was entitled, the likely result would have been his acquittal at his 1983 trial, and certainly the avoidance of his sentencing as dangerous offender," the Chief Justice said in his written decision.

"The province is therefore liable for Mr. Henry's wrongful conviction and subsequent lengthy period of incarceration."

Mr. Henry's lawyers had sought upward of $30-million, saying a "strong message" had to be sent. The lawyers could not be reached for comment on Wednesday.

The province has hinted at the possibility of an appeal.

"In the coming weeks, Ministry of Justice legal counsel will review the reasons for judgment and provide advice on next steps," Attorney-General and Minister of Justice Suzanne Anton said in a statement issued soon after Chief Justice Hinkson's decision was released.

"It is important to recognize that Canadian law on disclosure has undergone significant developments since Mr. Henry's criminal trial in 1982. The legal obligations for police and prosecutors in making disclosure to the defence are now much more robust and clearly defined."

Mr. Henry defended himself at trial in 1983, when he was convicted of three counts of rape, two counts of attempted rape and five counts of indecent assault involving eight women. The evidence included a positive identification from a police lineup that showed Mr. Henry being held in a chokehold by officers. He was declared a dangerous offender and sentenced to an indefinite period of time behind bars.

Throughout, Mr. Henry maintained his innocence and filed dozens of applications to have his conviction overturned. In 2010, the B.C. Court of Appeal, concluding legal errors had been made, acquitted Mr. Henry on all counts. The following year, he filed civil lawsuits against the city of Vancouver, the B.C. government and the federal government, with the city and federal government settling with Mr. Henry late last year.

During last year's trial, the B.C. Supreme Court heard that the Crown had failed to disclose key information such as witness statements, surveillance information and the fact that there was another suspect who lived close by.

NDP justice critic Leonard Krog said the matter should have been settled long ago and that it would be "an outrageous abuse of process" should the province appeal the decision.

"Chief Justice Hinkson was a very experienced and respected lawyer before his appointment to the bench. He heard all of the evidence," Mr. Krog said. "Other parties, given the advice of experienced counsel, settled early on. There is a time to say sorry and move on, and that time is now."

Mr. Henry's $8-million award comprises $7.5-million to "serve both the vindication and deterrence functions" of the Charter, $530,000 in compensatory damages and $56,700 in special damages. 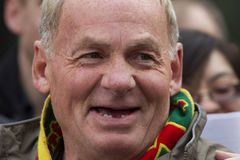