When the school district in Maple Ridge, B.C., asked for volunteers to pilot a new report-card system that abandons traditional letter grades, officials expected a few schools to sign up. Instead, 17 of the district's 21 schools stepped forward.

"Suddenly it was like, 'Holy cow, how are we going to manage the service and make sure everyone gets through it?'" said David Vandergugten, director of instruction for School District No. 42, which includes 8,000 students in Maple Ridge and Pitt Meadows, east of Vancouver.

The pilot launched in 2013, largely driven by teacher concerns that letter grades weren't effective. Students in Grades four through seven can choose to switch to a system that focuses on detailed feedback throughout the year, rather than simply whether a student earned a B- or an A. Since the program's launch, the number of families who still ask for letter grades has fallen from almost half to just 14.

"A lot of parents said at first they thought they'd hate it, but they came around," Mr. Vandergugten said.

British Columbia is at the forefront of Canadian provinces in the push to remove grades from report cards, with some districts hoping to one day implement such a system in every school, from kindergarten to Grade 12. But those efforts are constrained by the need to ensure students have standardized marks for postsecondary applications, meaning that for the foreseeable future, students in higher grades must remain in the old system.

Maple Ridge was an early pioneer in the province in experimenting with changes to its report cards. Schools in Comox Valley on Vancouver Island also have their own programs now. Surrey, the largest school district in British Columbia, won the 2014 CMOLIK Foundation's prize for enhancement of public education for its grades-free approach. The Sea to Sky school district began a grades-free pilot in January this year. Coquitlam, the third-largest district in the province, is considering one of their own.

The specifics vary by school district, but the common thread is a shift away from traditional letter-grade assessments in favour of more detailed evaluation and parent-teacher engagement throughout the year, often enabled by new online tools. The goal isn't to soothe anxiety or stroke self-esteem; rather, proponents argue that moving from letter grades to anecdotal reporting deepens engagement and the soft skills needed to solve problems in the real world. These goals line up well with the new B.C. curriculum currently being rolled out at schools across the province, which focuses on flexible learning. The new curriculum has helped the momentum of individual school experimentation.

"[Change] doesn't have to happen at the provincial level though, it really does require working it out at the local level … local context is really important. But I think what's happening in B.C. is [districts] are being given some space and an opportunity to try new things out."

However, there are limits to that space and opportunity. Grades-free report cards must end by Grade 10 so students can receive marks to use on their applications for postsecondary schools and scholarships.

The University of British Columbia is slightly ahead among Canadian universities, having recently implemented broad-based admissions. But grades are still a crucial part of that process.

"It certainly wouldn't be a case where we go, 'No grades, we can't admit you.' We'd find a way to make it work," said Andrew Arida, UBC's associate registrar of undergraduate admissions.

"But our admissions have to be evidence based … and grades are very helpful in that regard to assess merit and make decisions. Without them, we'd need to find some other way to do it."

In British Columbia, a coming government report may address the issue.

Last Fall, B.C.'s Ministry of Education launched Your Kid's Progress, a consultation that asks how parents prefer to learn about their children's progress. To date, the site has received 23,500 visits with almost 4,500 surveys completed, according to the ministry. The consultation closed on Feb. 4. Community meetings are also being held around the province.

The ministry will publish a report on the feedback by the end of the school year, with the goal of "creating a student reporting process that gives parents a deeper understanding of their child's progress."

Other provinces use a wide variety of reporting procedures, making direct comparisons difficult. Quebec uses a numbered system. Ontario has recently moved toward more detailed and ongoing parent-teacher communication, but it's in addition to traditional grades.

The school-district-level experimentation appears to be uniquely thriving in British Columbia.

In 2014, Calgary's board of education switched from letter grades to a numbered system, but it has been controversial and recently criticized by the Wildrose Party as "too broad" to be meaningful. Ministries of education across Canada said they were not aware of any other similar district-level experimentation in their jurisdictions.

"At this point, this is not on our radar as a national issue and we do not have a sense of how many school boards may be doing this," Floyd Marten, president of the Canadian School Boards Association, said in an e-mail. "These are often based on the priorities of each ministry along with local school boards … they reflect the direction and circumstances in each province."

British Columbia may lead the way in Canada with grade-free experiments, but the handful of school districts doing so are still a minority among the province's 60 districts.

"Despite the progress [in B.C.], I don't think it's going to happen very quickly that we're going to see no grades at all at the secondary level," said Ms. Mathison, of B.C.'s Institute for Public Education.

For five years, Maple Ridge has opted out of traditional report cards. Instead, students build portfolios of their work throughout the year, allowing parents to see a sample of their children's work in several areas over time. Maple Ridge teachers are required to communicate with the parents about student progress five times throughout the school year: 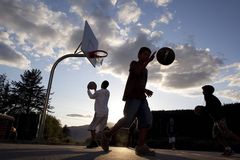