BC Liberal Leader Christy Clark has come out swinging against the U.S. lumber industry, saying timber barons south of the border are putting their interests ahead of American consumers.

The plight of U.S. home buyers has been shunted aside while a group led by the U.S. Lumber Coalition lobbies for tariffs to be slapped soon on Canadian softwood exports, she said Friday, while campaigning in B.C.'s Cariboo region.

"For a lot of people here in Quesnel and in the Cariboo and across the province, if you're working in the forest industry, you're thinking about what's going to happen next with the softwood lumber agreement," Ms. Clark told employees at West Fraser Timber Co. Ltd.'s Quesnel sawmill.

While Canadian and U.S. lumber producers have been duking it out in the long-running softwood dispute, British Columbia plays an important role in supporting Prime Minister Justin Trudeau's federal defence of Canada's forestry sector.

Industry analysts are warning about the harm in Canada from anti-trade moves envisaged by the new Trump administration. "I am not scared of Donald Trump," Ms. Clark said. "We are going to fight."

In February, she named former federal cabinet minister David Emerson as B.C.'s special envoy on the softwood file. The BC NDP, however, accuses her of being slow to respond. "Christy Clark's failure to deliver has put more B.C. forestry jobs at risk," the NDP said in a statement on Friday.

Quesnel and Williams Lake are among the dozens of B.C. communities that rely on a healthy forestry sector unencumbered by hefty duties on Canadian exports.

"We all know what the American industry is driven by on this. They are driven by greed, pure and simple," Ms. Clark said in Williams Lake, where she visited Pioneer Log Homes.

While the home builder does not export lumber to the United States, Pioneer general manager André Chevigny said the forestry sector is a major Cariboo employer.

"Forestry affects our region's productivity and our economy," he said in an interview. "Williams Lake is resource-based, and communities are dependent on the lumber exports. The B.C. Interior would be drastically affected by tariffs."

U.S. lumber producers want the U.S. Department of Commerce to impose preliminary countervailing duties soon on Canadian softwood exports to retaliate against what they call subsidies in Canada.

"Frankly, there's a lot at stake for Alberta," said Brock Mulligan, spokesman for the Alberta Forest Products Association. "We've always vigorously disputed the claims that are being asserted by the U.S. side, both on countervailing and anti-dumping."

Mr. Mulligan pointed out that U.S. claims have not been found to be valid in past iterations of the battle.

"Ultimately, this is really harmful to the U.S. consumer as well. When you cut off the supply of the product, the U.S. doesn't supply enough for their own marketplace, it ultimately hurts the people who rely on the product – we're talking about people who work in construction, lumber imports, transportation and, of course, ultimately the home buyer who ends up paying a higher cost for a house," he said.

"Without question, without any doubt, the health and the economic well-being of the forestry sector across the country is one of the top priorities of the government of Canada," Ms. Hillman said in Vancouver during a recent conference held by the Council of Forest Industries, which represents producers in the B.C. Interior.

The writ has dropped: What to watch for in the B.C. election campaign
April 11, 2017 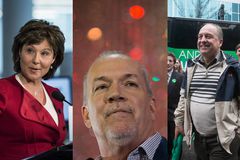 B.C. leaders spar in first debate of election campaign
April 20, 2017
B.C. party leaders take muddled stands on provincial health premiums
April 20, 2017
Follow Brent Jang and Jeffrey Jones on Twitter @brentcjang @the_Jeff_Jones
Report an error Editorial code of conduct
Due to technical reasons, we have temporarily removed commenting from our articles. We hope to have this fixed soon. Thank you for your patience. If you are looking to give feedback on our new site, please send it along to feedback@globeandmail.com. If you want to write a letter to the editor, please forward to letters@globeandmail.com.
Comments