Former B.C. cabinet minister Bill Bennett is accusing Mike de Jong, the ex-finance minister, of misleading cabinet and caucus on the size of the Liberals' last surplus in government – billions of dollars that he said the party could have used for programs that could have won votes in the spring election.

Mr. Bennett's criticisms, in an e-mail obtained by The Globe and Mail, come in the week before BC Liberals vote on a leader to succeed former premier Christy Clark, who quit politics after the Liberals were ousted from government last summer as the result of a political alliance between the BC NDP and the BC Greens. Mr. de Jong is among six candidates for the leadership.

"Had we used even a portion of that extra money to help with strong social supports, I don't believe we'd be having this leadership campaign today," writes Mr. Bennett, a high-profile BC Liberal first elected in 2001 who chose not to run for re-election in 2017.

The BC Liberals won two more seats than the other two parties in the legislature as they sought a fifth term in government last May. However, it was not enough seats in the 87-seat legislature to outnumber the combined New Democrats and Greens.

Mr. Bennett's comments speak to a continuing theme in the leadership race, which came up this week in the last debate among candidates, namely that the Liberals did a poor job of conveying to voters the benefits of the buoyant economy that came about on their watch in government.

"Balanced budgets and triple-A credit ratings have to have a purpose – and that purpose has to be people," leadership candidate Dianne Watts told the debate during a segment on what went wrong for the party in the 2017 election. She said Liberals have to connect with voters.

Andrew Wilkinson said the party was preaching to voters from "30,000 feet" about credit ratings and debt-to-GDP rations. "It meant nothing in [voters'] daily lives. The NDP, in the Lower Mainland, were in their living rooms, saying, 'We'll give you free bridge tolls, cheap daycare and a renters' subsidy, $400 a year.'"

Mr. Bennett, whose cabinet portfolios included mines and tourism, said in the e-mail that he does not trust Mr. de Jong.

"I know Mike de Jong. One thing he is not is incompetent."

Stephen Carter, a campaign strategist for Mr. de Jong, said in an interview that, according to party data, only 23 party memberships have been sold during the leadership race in Mr. Bennett's former Kootenay East riding, suggesting the former minister has little clout in the process. (The party declined to confirm the data on the membership sales.)

"It's a minor dust-up from one guy who is looking for someone to blame for an election loss," said Mr. Carter, an Alberta political strategist known for his work for former Alberta premier Alison Redford and Calgary Mayor Naheed Nenshi.

He said he rejected the premise that the best use of a surplus is "to buy the voters off" ahead of an election, suggesting the budget was pretty clear.

Mr. Carter also said the core of Mr. Bennett's allegation didn't make sense. "The idea that you can push one past your cabinet colleagues in the budget and they don't understand what's actually being passed? That's a joke."

Mr. Bennett, who did not respond on Wednesday to e-mails, texts, calls and voicemails seeking comment, wrote that he is supporting former cabinet minister Mr. Wilkinson in the leadership vote, which begins on Feb. 1 and runs until the party choice is announced in Vancouver on Feb. 3.

Despite an agreement between Mr. de Jong and Mr. Wilkinson to ask their supporters to make each other the second choice on the preferential ballot, Mr. Bennett said he will not be supporting Mr. de Jong as his follow-up choice to Mr. Wilkinson.

Instead, he said he will be backing rookie MLA Michael Lee. "Michael lacks 'in politics' experience but he is a very smart guy and is a conservative with a social conscience. I trust him."

In a statement, Mr. Wilkinson's campaign director, Katy Merrifield, said Mr. Bennett is entitled to his opinion and to vote for whomever he chooses.

Veterans spar with rookies in final debate before BC Liberal leadership vote
January 24, 2018 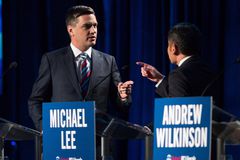 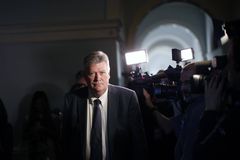