Efforts by B.C.'s Speaker of the House, Darryl Plecas, to curb derogatory language during legislature debates have blown up into a challenge of his authority by opposition Liberals.

Mr. Plecas, re-elected in May as a BC Liberal MLA, earned the enmity of his former colleagues after he took the politically neutral position of Speaker in September.

His decision ended a looming crisis for the minority NDP government, by eliminating the need for the NDP to provide a Speaker who would have to regularly break tie votes.

But the Liberals, still seething over what they described as a betrayal, have been increasingly bold in questioning Mr. Plecas's efforts to maintain order in the legislature.

On Tuesday, Mr. Plecas signalled that he has had enough: "Challenges to the authority of the Speaker are unacceptable and will not be tolerated in the future," he declared in the House.

He reminded MLAs that the Speaker has the final say over whether language in the legislature is offensive, disrespectful or unparliamentary.

If his statement was meant to end the challenges, it backfired.

Mike de Jong, the Liberal House Leader and one of the longest-serving MLAs in the legislature, told reporters following the ruling that Mr. Plecas is setting a "very dangerous precedent" with a "dictatorial" attack on freedom of speech.

"Parliament can't work properly without [MLAs] respecting the Speaker, that's a fundamental tenet of the way the House functions," Mr. de Jong said. However, he said Mr. Plecas is breaking new ground with his rulings and urged him to consult if he wants to change the tone of debate.

"I don't think there is any question that the manner in which the Speaker took the chair has left some members of the opposition feeling negatively towards the individual," Mr. de Jong said. "It does point to a tension that exists in the House, and in my view makes it all the more important that as the presiding officer in the chamber, that the Speaker reach out rather than impose his will."

Philippe Lagassé, an associate professor and constitutional scholar at Carleton University, said the Liberals are creating a problem by challenging the Speaker's authority.

"The Westminster Parliamentary tradition relies heavily on the honourable behaviour of its participants," he said. "The purpose of the position of Speaker is to ensure the proceedings run smoothly. … If you refuse to respect that, it becomes a free-for-all. Can we imagine a sport where one team refuses to abide by the calls of the referee?"

The clash was sparked by the Liberals' use of cheeky, made-up titles for cabinet ministers during Question Period over the past several weeks, calling one "the minister of intimidation" and another "minister of gridlock." There is nothing new about the tactic – in fact, the New Democrats did the same thing when they served in opposition – but Mr. Plecas has twice instructed the Liberals to use only proper titles.

Instead of submitting to Mr. Plecas's rule, Mr. de Jong lodged an official protest, saying decades of parliamentary precedents show that such language should be allowed and cannot be prohibited on "the whim" of the Speaker.

Mr. Plecas was responding to that complaint on Tuesday when he laid down his authority. "I conclude that the unofficial and at times mocking or derogatory titles, when directing a question to a minister of the Crown, is indeed disrespectful to the minister and reflects poorly on this institution."

Government House Leader Mike Farnworth acknowledged that the role of opposition sometimes calls for strong language and noted that one speaker may take offence to a word that was acceptable to a previous speaker.

But, he said, the bottom line is that whoever is in the speaker's chair is the final arbiter on language. 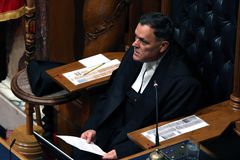 BC Liberals’ Darryl Plecas to serve as Speaker
September 8, 2017 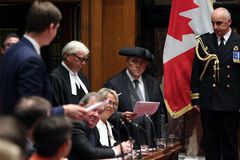