The B.C. Liberals say they will repeal a City of Vancouver plan the party claims prohibits natural gas in some new buildings, but the city says no such ban exists.

Andrew Wilkinson, candidate for Vancouver-Quilchena, said on Saturday the city's ban would increase costs to consumers, businesses and residents because it would raise building costs and create a reliance on electricity, which is more expensive.

In a statement responding to the announcement, the city said it has no plans for an outright ban on the use of natural gas.

The city does have a new building policy, which goes into effect Monday, that sets energy efficiency and emissions targets for new construction on rezoned lots.

"Developers can choose to build new buildings with natural gas, provided they can meet the energy efficiency and emissions targets," the statement said, adding the targets require a 50 per cent decrease in greenhouse gas emissions.

Documents from a city presentation on Friday explain that the regulation will typically apply to taller residential or commercial buildings, which account for about 55 per cent of new development.

Wilkinson said if the Liberals form the government after the May 9 election, they'll change the Vancouver Charter that allows the city to dictate its own building codes in order to repeal restrictions on natural gas.

"It's essential that Vancouverites be able to keep their costs down. We do not support processes and programs that drive up costs," he said.

Coun. Andrea Reimer said she's perplexed by Wilkinson's statements, which do not represent the facts of the city's plan.

"It's definitely a concern when a candidate in an election campaign is using inaccurate information," she said. "There is no ban, ergo legislation to stop a ban would functionally have no impact."

She said the city is moving to reduce emissions and encourage the use of renewable resources over the 35 years, but there is no intention to ban natural gas.

A statement the city issued in February said natural gas would still be allowed in new buildings under six storeys for use in fireplaces, cooking ranges, furnaces, domestic hot water and laundry dryers.

These changes have been in the works since November 2015 when the city approved its strategy to achieve 100 per cent renewable energy use by 2050.

Wilkinson said the Liberals waited until now to take a stance on the issue because changes to the city's building code go into effect Monday.

"It's timely to get out the word now so people don't make decisions and face a flip-flop in the city of Vancouver. We want the status quo to continue," he said.

But Reimer said the city's new building regulation, which was approved in November 2016, aligns with the province's recent B.C. Energy Step Code that requires improved energy efficiency for buildings.

"It does exactly the same thing as the policies we'd be bringing in, although our policy applies to much fewer buildings than the Step Code applies to," she said.

"The province states that the Vancouver region will need to invest over $10 billion in preparing and adapting to climate change due to sea level rise and increased storms and droughts. Only by reducing greenhouse gases today can we ensure this number does not increase," said a statement from the city. 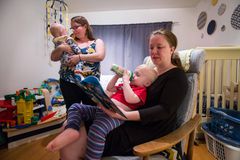 BC NDP win would cause ‘uncertainty’: TD
April 28, 2017
B.C. softwood lumber envoy distances himself from Christy Clark’s threats
April 28, 2017
Opinion
Why Green Party Leader Andrew Weaver believes change is in the air for B.C.
April 28, 2017
Opinion
For B.C. and Alberta NDP, a close – and complicated – kinship
April 28, 2017
B.C. party leaders make final campaign plans for election’s last days
April 27, 2017
Report an error
Due to technical reasons, we have temporarily removed commenting from our articles. We hope to have this fixed soon. Thank you for your patience. If you are looking to give feedback on our new site, please send it along to feedback@globeandmail.com. If you want to write a letter to the editor, please forward to letters@globeandmail.com.
Comments