The families and friends of six men found executed in a British Columbia apartment seven years ago erupted into tears and applause on Thursday as a judge declared two men accused of the murders guilty.

"The murders were execution-style shootings," the judge said, reading a summary of her 200-page written decision.

The victims – Corey Lal, his brother Michael, associates Eddie Narong and Ryan Bartolomeo, as well as fireplace repairman Ed Schellenberg and Lal's neighbour, Chris Mohan – were found Oct. 19, 2007, face down, shot in the back or the back of their heads.

Their arms were near or above their heads, Justice Wedge noted. Clothing was put over the faces of three victims found near the fireplace.

"All six were in submissive positions when shot," the judge said.

"The expert forensic evidence indicates the shots were administered carefully and with precision. The deaths were deliberate executions performed while the victims were lying defenceless." The two accused arrived in court in suits. Mr. Haevischer waved at family members seated in the first row of the public gallery behind him and blew a kiss to two little girls among them.

One girl, about three years old, played with flash cards as the judge recounted the grisly details of the crime. The two gang members remained motionless as the judge declared their guilt.

A sentencing hearing will be held at a future date, but first-degree murder carries a mandatory minimum sentence of life in prison with no possibility of parole for 25 years.

Mr. Johnston and Mr. Haevischer, both 30, claimed at trial that the plan was to rob Corey Lal, a drug-dealing rival of their gang, the Red Scorpions, but Justice Wedge found the story "implausible."

"It's a reasonable inference in the items left behind that the plan to rob Mr. Lal was incidental to the plan to kill him," Justice Wedge said. "Had that been the plan, they could simply have abandoned it when they found others in the apartment with him. Instead, they executed six people." Michael Lal, 26, Mr. Bartolomeo, 19, and Mr. Narong, 22, were caught in the crossfire. Mr. Schellenberg, a 55-year-old father of two, was in the building to service fireplaces and Mr. Mohan, a 22-year-old student who lived next door with his mother, were innocent bystanders assassinated to eliminate potential witnesses.

The murders were carried out by Mr. Haevischer, Mr. Johnston and a fellow gang member who can only be identified as Person X, due to a publication ban.

Person X pleaded guilty in April, 2009, to three counts of second-degree murder and is serving a life sentence.

Justice Wedge said evidence shows there were at least two shooters and it is likely that one of them was Person X. But both Mr. Haevischer and Mr. Johnston were actively involved in the murders. At the very least, one was a key player and the other aided and abetted the murders, she said.

The trial originally set out with three accused but a couple of months into the trial, gang leader Michael Le entered a surprise guilty plea to conspiracy. The Crown dropped a first-degree murder charge and Mr. Le was sentenced to 12 years in prison in exchange for his testimony.

For the most part, Justice Wedge did not accept Mr. Le's evidence.

There is too great a risk that he minimized his own role in the killings in order to secure a deal, Justice Wedge said.

Outside the court, Crown lawyer Mark Levitz remembered the victims.

"They left mothers and fathers, brother and sisters, a wife and children who had to suffer all these years," Mr. Levitz said. ``I hope the verdict today gives them some comfort and they feel a sense of justice." Eileen Mohan, whose son Chris was killed, said she waited seven years for this verdict.

"They live a life that they think they deserve and they became this way because previously the courts had a revolving door on them," Ms. Mohan said.

"They emboldened themselves to the point that they walked up to my doorstep and they stole my son's life, and they thought they were going to walk free. But today, the court's have spoken – they will n"ot tolerate behaviour like that."

The so-called "Surrey Six" murders were part of a bloody gang war that spanned several years and turned the streets of Metro Vancouver into a virtual shooting gallery. Hardly a week went by without a shooting.

Alleged former Red Scorpions leader Jamie Bacon has yet to face trial for conspiracy and one count of first-degree murder in relation to the deaths. Mr. Bacon faces three additional charges alleging he ordered a hit on Person X.

Another man, Sophon Sek, is awaiting a separate trial for manslaughter. 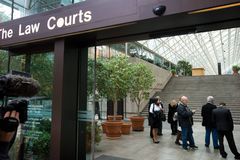 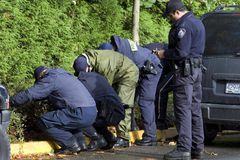