A minor hockey league on Vancouver Island is warning parents that it will ban all spectators from the stands during games if they continue to verbally abuse referees, players and coaches.

Vancouver Island Amateur Hockey Association president Jim Humphrey posted a letter to the group's website last week pleading for parents to stop their "vindictiveness," which he said has prompted some referees — typically teenagers — to quit.

If such behaviour doesn't stop soon, the association said it will clear the stands at all island arenas for one weekend, potentially during playoffs next month. If that doesn't send the message, the spectator ban could expand.

"This is not a threat; this is a plea for help from parents," Humphrey said in an interview Tuesday.

"It's atrocious. I don't know why it's so hard for parents to understand that they can't continue to be so abrasive toward players, team officials, coaches."

If the ban went ahead, parents and other spectators could still watch from foyer areas that in many arenas provide a view of the ice from behind glass.

Humphrey stressed the problem rests with a small minority of parents — just a few per cent, he estimates — but he said such behaviour can be seen at least once every weekend at every island arena.

It usually involves parents shouting at referees, coaches and players, often using four-letter words that Humphrey preferred not to repeat.

In one recent extreme case, two fathers attempted to accost three teenage refs following the game. The teens hid in a locker room, he said, prompting the adults to attempt to kick down the door. The association is investigating the incident, he said, though police are not involved.

The association has assigned specific parents to be responsible for fan conduct, introduced a yellow-card system to flag abusive behaviour, and asked parents to sign a fan code of conduct at the start of the season, but he said nothing has worked.

Humphrey said the association will be monitoring fan behaviour at arenas in the coming weeks to decide whether to hold a spectator-free weekend, which would likely happen early next month.

"If it still doesn't get the point across, then it will be up to the board of directors to see where they want to take it," he said.

"I hope it doesn't come to that. But at the end of the day, we're here to make sure the kids are allowed to play hockey, and whatever is necessary to make that happen we're going to do."

Paul Carson, a vice-president with Hockey Canada, said he has never heard of a minor hockey league in the country banning spectators due to abusive parents, though he said it's possible it's happened before.

"I think it's an interesting approach and there is a compelling argument about concerns over the environment kids are competing in," he said in an interview.

"We do believe that it is a small minority, but the challenge is that it only takes one really bad experience to taint it for everybody."

While he said such behaviour is rare, Carson said minor hockey associations across the country have struggled to find ways to control unruly parents.

"The big concern is behaviour like this in the stands can find its way into the behaviour of players on the ice," he said.

"That heightened sense of frustration and anxiety finds its way into the game."

Earlier this month, a father in North Vancouver was handed a conditional discharge for threatening a nine-year-old player on his son's team.

Last year, Hockey Winnipeg banned a couple from minor hockey rinks for three years after an altercation in Fargo, N.D., with the coach of an opposing team.

In 2013, a Vancouver-area father who was coaching his son's peewee hockey team was sentenced to 15 days in jail after purposely tripping an opposing player.

Of pucks and punch-ups: a hockey tradition’s slow death
December 30, 2014 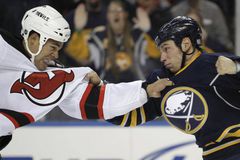 Facts & Arguments
My quest to make my son a hockey fan didn’t quite go as planned
December 1, 2014 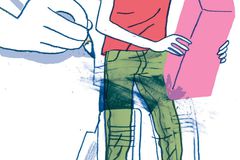