When two paramedics arrived on a Langley, B.C., mushroom farm in 2008, the war-zone-like chaos, the screaming anguish and the dead and grievously injured were well beyond what they expected when they thought they were responding to a drowning accident.

Instead, one of the paramedics told a coroner's jury Monday he'll never get over his inability to help when he and his partner encountered a man near death on the ground and another man hysterically screaming in an unrecognizable language inside a hut as he tried to pull his co-workers from a brown-water pool.

"I think it will stay with us for the rest of our lives," paramedic Matthew Nasseri testified.

"It was one of the most excruciating experiences of my life."

He told reporters later: "It's very hard to stand there and watch people die."

Vincent Ford, Mr. Nasseri's partner that day, told the inquest just months before they were called to the farm, Mr. Ford had taken a course about gas and confined spaces after two paramedics died in a mine accident.

Mr. Ford said he knew what was happening in Langley was more than a drowning.

"The signs, with so many bodies, so many victims in the shed that told me it was a dangerous situation," he told the jury Monday.

Jurors heard one man went into a shed that day and was overcome by a mix of toxic gases. The others followed to try to help him. Three men were killed and two others were permanently brain injured.

Mr. Ford immediately declared the situation hazardous and he and his partner refused to go inside the hut, but they couldn't explain why to the Vietnamese workers who wanted them to help their friends.

"There was a strong language barrier," Mr. Ford told the inquest.

The language problem became clear to the inquest when an almost 17-minute 911 call was heard.

"Quickly, you came, hey," a man yelled into the phone. But in his panic, his English was mostly unintelligible.

"I need to know what happened, sir," the male dispatcher said repeatedly.

About seven minutes into the conversation, the man handed the phone over to a woman who could be understood, but she didn't know what happened.

She said someone drowned in a water tank.

The dispatcher asked the woman what language she spoke, but no interpreter was called in during the conversation.

Because none of the workers spoke English, Mr. Nasseri said they had a difficult time stopping others from trying to rescue their friends.

"We did everything possible to stop them, yelling, screaming, even intimidating them," he told the inquest.

There were no signs near the hut to indicate hazardous gas might be nearby, and no one could tell the paramedics what might have happened.

"You can imagine how hectic," Mr. Ford paused. "It was like a war zone when we got there."

Coroner's lawyer Chris Godwin said in his opening statement that the deaths and injuries might have been averted if the workers had known the risk and the company had put the proper safety procedures in place.

"Mr. Coroner, this was a tragedy that perhaps could have been prevented," Mr. Godwin said.

While Mr. Nasseri said he knew there was translation service available through the 911 communication system, Mr. Ford didn't know about the service and wasn't sure if they used it that day.

B.C. Federation of Labour president Jim Sinclair is attending the inquest and said it was clear the system wasn't able to deal with people who didn't speak English.

Instead of the usual 90 seconds to dispatch an ambulance, it took five minutes. Firecrews weren't dispatched until the ambulance arrived on the scene, so the ambulance crew could only wait and stop others from entering the shed, the inquest heard.

One of the questions put to witnesses on Monday was about the possibility of having a type of registry for all the confined spaces in the province where toxic gas or lack of oxygen might be present.

Mr. Sinclair said too many people are dying in confined spaces, so such registry only makes sense.

"If they had that information, then the fire trucks would have been called first, absolutely."

B.C.'s workers compensation board concluded in a report last November that the owners of the mushroom farm had been repeatedly warned that a composting system was potentially dangerous.

The report found the accident happened as workers were attempting to clear a clogged water pipe. A mix of toxic gasses leaked into the small shed they were in.

The site included a compost facility that converted chicken manure, straw, gypsum and water into fertilizer, which was then used on the mushroom farm.

The water used in the compost process was collected from sources around the farm and was also recycled from the composting system itself.

The report found the problems dated back to 2005 with the construction of the water recycling system, which didn't include measures to keep straw and other materials from entering its tanks and pipes.

Last November, a judge imposed fines of $350,000 on two companies, A1 Mushrooms and HV Truong, and their three owners, who pleaded guilty. 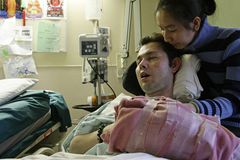 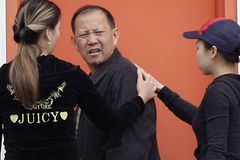 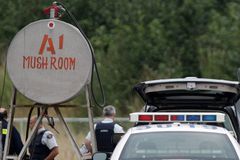