For 100 years, when Chinese newcomers arrived in the strange new land of Vancouver, they went to special houses built for family clans.

There, they could be guaranteed a welcome and temporary refuge in their own culture while they adjusted to their new home.

Now, Chinatown is about to get a new building that will provide that kind of cultural refuge, but for a much different group: B.C.'s first nations.

A unique building is going up near the Chinatown gate that will combine social housing for Vancouver natives – a large and growing group – with a healing lodge that will provide rooms for aboriginal people who come from rural areas for medical treatment.

"It seems strange to compare the two cultures, because first nations have been around such a long time and the family-association houses were for Chinese coming to a foreign land," said architect Joe Wai, who designed the building that will be defined by the totem pole on its front façade. "But we've taken away their land, and so the city has become like a foreign place, and now this serves the same purpose as it did for us: It's a collective home away."

Mr. Wai, a respected advocate for Chinatown who helped preserve the community from freeway destruction in the 1960s, included space for a sweat lodge, a smudge room and a cafeteria serving traditional food.

To get a feel for what he needed to do, Mr. Wai and his staff went to a sweat lodge at the Tsawwassen First Nation's land south of Vancouver.

Besides the healing lodge, which will have 20 beds in 13 rooms of different sizes, and 24 units of supportive housing on the lower floors, the building will include an artists' studio and a fair-trade art gallery.

Vancouver is renowned for its native artists, who sit out on sidewalks carving designs onto small poles and other wooden artifacts.

But they're often exploited, said Richard George, the president of the Vancouver Native Housing Society. People buy their art on the street for 10 cent on the dollar and then resell the museum-quality carvings to commercial galleries for much more.

The gallery and healing lodge will be the native housing society's first social-enterprise ventures, where it can make some profit to help pay the operating costs of the building.

The unusual project is the result of the province's recent surge of social-housing construction and federal stimulus spending.

The building, due to be finished at the end of October, is going up on the site of the former Pender Hotel, one of 24 residential hotels that the province bought before the Olympics to preserve that stock of cheap housing in the Downtown Eastside for its very poor and often drug-addicted or mentally ill residents.

The housing association tore down everything except the hotel's historic façade. That will allow it to provide larger rooms with self-contained bathrooms in the social housing, as well as all the other extras.

That was all possible because the federal government chipped in $4-million through its Infrastructure Stimulus Fund, while the province is providing $6.8-million in land and construction money.

Last week, Squamish Chief Ian Campbell came down to the site to perform a special blessing ceremony in the excavated hole. He swept it with cedar boughs and drummed a traditional song, whose sound reverberated off the concrete walls on either side.

Busting the myths of Vancouver real estate
May 24, 2011 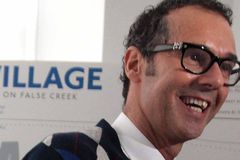