The Sept. 22 Leader's Levee in Vancouver, described in a party notice as "our biggest event of the year," comes as the NDP government is working on legislation to ban corporate and union political donations.

The government has not said how quickly it will introduce or pass such legislation once the legislature resumes on Sept. 8, but the party has made it clear it has no plans to change its fundraising practices in the meantime.

Read more: Ban on big money in politics could be delayed by lobby reform: BC NDP

"To ensure a level playing field while the BC Liberals continue to fundraise from big corporations and rich insiders, it is our policy to follow the current rules until they are changed," NDP president Craig Keating said Wednesday in an e-mail exchange.

Tickets for the event at the Fairmont Hotel Vancouver are $325 if bought by Aug. 25. Single regular tickets are $525, and group tickets for up to seven people are $3,000. Last year's event, held in October, brought in about $193,000, mostly from organizations, according to the party's campaign-finance report.

Despite the September event, Mr. Keating said most donations to the party come from "regular British Columbians," and Mr. Horgan has been accessible to the public by attending the Pride parade in Vancouver, riding public transit and attending community events. "You don't need to buy a ticket to have a voice in his government," Mr. Keating wrote.

The New Democrats have long derided the BC Liberals for their fundraising practices and have long promised to ban union and coporate donations and implement donation limits if elected. The NDP had previously said such legislation would be among its first priorities.

Attorney-General David Eby, whose portfolio includes campaign-finance reform, did not make himself available for an interview to explain how quickly the government intends to introduce legislation or what would be in such a bill.

BC Green Party Leader Andrew Weaver dismissed the NDP levee as "the last shakedown" before political-fundraising legislation, and a cash-for-access event. "It's reprehensible," he said in an interview.

Mr. Weaver said average British Columbians would be unlikely to be able to afford the ticket prices, leaving unions and corporate donors to pay, and, thereby, have access to the Premier and cabinet. "Corporations don't pay 3,000 bucks for a table with the expectation that they are going go get a nice meal. The reason why people spend is to have access to the various ministers."

The BC Liberals long refused to limit political donations despite repeated criticism of the party's fundraising practices, including cash-for-access events. Earlier this year, however, they committed to have a panel review campaign-finance rules, and then, in the previous month's final Throne Speech, before they were defeated in a confidence vote, they pledged to ban corporate, union and third-party donations.

Last year, the Liberals raised $13.1-million in donations while the NDP raised $6.2-million. Two-thirds of the money raised by the Liberals came from a small collection of corporate and business donors while $1.8-million of NDP funding came from unions.

Mr. Weaver said the BC Greens, whose three MLAs are backing the NDP to allow it to govern, are at the table with the New Democrats for talks on legislation to ban union and corporate donations.

"The problem I have is continuing to try to milk as much as you can out of the system until it comes into place."

Sheena McConnell, press secretary to Mr. Horgan, said in an e-mail exchange that questions about the event would have to be answered by the party.

Ms. McConnell said the political-fundraising issue remains a "key priority" for the government and will be one of the first pieces of legislature in the session that begins early next month.

Asked about the timelines for enacting such legislation, Ms. McConnell wrote, "Once the bill is introduced it is up to the entire legislature to decide when it passed, and we cannot presuppose when that date will be."

Mr. Weaver urged the NDP to forsake the high-ticket-price-event approach and place a new emphasis on seeking smaller donations from the public.

"The high road message would have been to charge 50 bucks or something and that's going to cover the cost for dinner and let Joe Citizen buy a ticket as well if you're going to have an event like that."

With a file from Kathy Tomlinson 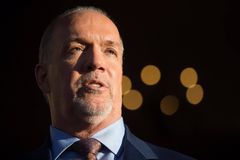 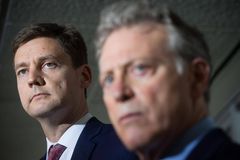 Ban on big money in politics could be delayed by lobby reform: BC NDP
July 25, 2017
Follow Ian Bailey on Twitter @ianabailey
Report an error Editorial code of conduct
Due to technical reasons, we have temporarily removed commenting from our articles. We hope to have this fixed soon. Thank you for your patience. If you are looking to give feedback on our new site, please send it along to feedback@globeandmail.com. If you want to write a letter to the editor, please forward to letters@globeandmail.com.
Comments