The B.C. government says it had a commitment from the federal government for $153-million in funding for expanded child-care programs, but Ottawa's last-moment cancellation of the planned joint announcement has created uncertainty about when the money is coming.

In the midst of navigating a tense trade dispute between B.C. and Alberta over the expansion of Kinder Morgan Canada Ltd.'s Trans Mountain oil pipeline, the NDP government said federal officials e-mailed their B.C. counterparts on the eve of the planned Feb. 9 announcement that the event was being postponed, and no reasons were given.

On Wednesday, officials in Ottawa said a deal will be announced in due course, and that the trade dispute will not affect the amount or terms for the province.

The B.C. government has been banking on the federal funding to help it launch an affordable childcare program that is to be the cornerstone of the provincial budget that will be tabled on Feb. 20. Unless the funding is confirmed in the next few days, the budget will not reflect Ottawa's contribution.

The provincial government was so certain the deal was sealed that it had already included it in a cabinet order that was made public on Feb. 9. The cabinet order included a 41-page framework agreement that details how the federal money will be used to fund spaces for Indigenous children, students with special needs and children of young parents. Under that anticipated agreement, Ottawa is to provide $51-million each year for three years.

"We are finalizing the plan," she told reporters on Wednesday. "Our two offices are rescheduling the announcement."

Ms. Chen said the federal money is to supplement her government's new child care package that will increase the number of daycare spaces, enhance training for caregivers and provide financial relief to low-income families. "I'm looking forward to seeing the money coming in soon."

In Ottawa, officials indicated the deal will be completed shortly.

A spokesman for Jean-Yves Duclos, the federal Minister of Families, Children and Social Development, said the announcement of the deal was only put off for logistical reasons.

"To date, we have signed seven bilateral agreements with provinces and territories," Mathieu Filion said. "In relation to British Columbia, there had been a date for an announcement that was tentatively set aside last week, but it had to be changed for scheduling reasons. We acknowledge it was our fault, but there will be a deal signed in the near future with the B.C. government."

Mr. Filion added that the delay "is in no way connected to B.C.'s position on Kinder Morgan, and will have no impact to the amount or terms for the province."

However, B.C. Premier John Horgan acknowledged in an interview on CBC Radio on Wednesday that he is concerned about the future of federal funding for social programs because of the pipeline dispute.

"We had until recently a very positive working relationship with the federal government," he said, "and we were making great progress, particularly on childcare. We announced an agreement between the two through [a cabinet order] last week. We were to have a signing ceremony that's been delayed."

The Premier said he is not certain the delay was due to the Kinder Morgan dispute, "but certainly, there is consternation in Ottawa that the governments of B.C. and Alberta are at a fundamental disagreement."

Alberta Premier Rachel Notley has launched a trade war over B.C.'s threat to block expanded shipments of oil to its coast while it consults on whether a potential oil spill can be cleaned up.

Ms. Notley has banned B.C. wines from Alberta liquor stores in a bid to force the federal government to thwart the British Columbia government's efforts. 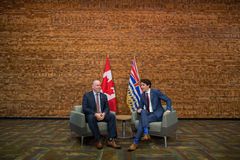 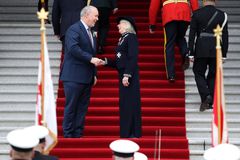 Follow Justine Hunter and Daniel Leblanc on Twitter @justine_hunter @danlebla
Report an error Editorial code of conduct
Due to technical reasons, we have temporarily removed commenting from our articles. We hope to have this fixed soon. Thank you for your patience. If you are looking to give feedback on our new site, please send it along to feedback@globeandmail.com. If you want to write a letter to the editor, please forward to letters@globeandmail.com.
Comments are closed