The provincial government is investigating whether a controlled burn started by firefighters escaped to injure the cattle and property of local ranchers in the Cariboo region.

Doug Donaldson, Minister of Forests, Lands and Natural Resource Operations, told The Globe and Mail on Wednesday that officials with the provincial Wildfire Service began investigating whether a "back burn" started south of Clinton by firefighters a week ago destroyed local cattle and property instead of protecting ranchers from the encroaching Elephant Hill wildfire.

A group of ranchers are calling on the government to pay them for any losses to livestock, rural structures, woodlots, private timber, grazing areas and fencing.

"An investigation is under way and the ranchers that originally raised concerns have been contacted by the provincial wildfire service," Mr. Donaldson said.

He could not provide a timeline for the investigation to conclude, noting the province's "resources are pretty stretched right now," combatting one of the more intense wildfire seasons in recent memory.

Mr. Donaldson said the provincial Wildfire Act allows for private landowners to be compensated for any damages stemming from a back burn, a technique firefighters regularly use to stop massive blazes from reaching sensitive areas.

"It's horrific the situation people are facing and they can take some solace knowing that the Premier is on this file and said we will make people whole," he said.

Still, firefighters across the province will continue to use these back burns where suitable in order to outflank larger fires that would be impossible to fight with pumps and hoses, he said.

"The professionals know how to evaluate the risk and there's been very many positive outcomes," he said of the technique. "Part of the reason why people were able to return to Williams Lake and the evacuation order lifted was because there was a very large burnoff."

Meanwhile, Brent Barclay, a bureaucrat with the B.C. Ministry of Agriculture, said an estimated 30,000 farm animals are within the fire-affected areas and losses have not yet been tallied.

Roughly 500 ranchers have received support or information through emergency-response crews and the province is spending $6-million on rebuilding fences along highways and Crown ranges to protect livestock and drivers.

Other efforts to support ranchers include relocating livestock or delivering feed, but Mr. Barclay said it's unclear when ranchers and other agriculture workers can expect any financial compensation.

"The province is in negotiations or discussions with the Government of Canada around an agri-recovery program," Mr. Barclay said on Wednesday. "I do not know when that will be completed, but that is one of the first steps in the whole process to receive funding and that was initiated several weeks ago."

A combination of lightning and tinder-dry conditions led to more than two dozen new wildfires starting in British Columbia over a two-day period. Kevin Skrepnek of the BC Wildfire Service said the majority of the 17 fires that started Monday were the result of lightning. Another 11 fires had started by midday Tuesday, bringing the total number of fires currently burning in the province to 146.

Since April, there have been 928 fires and just over 500 of them have been confirmed to be naturally caused while another 364 were human caused. Mr. Skrepnek said the numbers are consistent with previous years where roughly 60 per cent of fires are natural and 40 per cent are caused by people.

Bans on campfires for most of the province as well as the use of off-road vehicles on public lands in the Cariboo, Kamloops and Southeast fire centres remain in place as preventative measures.

"We remind everyone to remain vigilant … and just [be] extremely careful with any activity that could potentially spark a wildfire," Mr. Skrepnek said.

People are also warned heavy smoke is causing poor visibility on roads that are remaining open and drivers should have their headlights on and watch out for any wildlife. As well, the smoke poses a health risk for infants, the elderly and people with chronic health conditions.

An air-quality advisory from Environment Canada that already covered the southern half of the province has now expanded north past Smithers in northwestern B.C.

While there is still no significant rain in the forecast to douse the fires, Mr. Skrepnek said inflow winds from the ocean are expected to roll in by Friday and clear the smoke hanging over the south coast. The change in weather could bring cooler temperatures and rain, but he said it could also cause fire-fuelling winds to pick up. 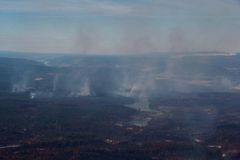 Lightning, dry conditions spark 28 new B.C. wildfires in less than two days
August 8, 2017
B.C. wildfires still raging on a month after state of emergency declared
August 8, 2017
Follow Mike Hager on Twitter @MikePHager
Report an error Editorial code of conduct
Due to technical reasons, we have temporarily removed commenting from our articles. We hope to have this fixed soon. Thank you for your patience. If you are looking to give feedback on our new site, please send it along to feedback@globeandmail.com. If you want to write a letter to the editor, please forward to letters@globeandmail.com.
Comments