For hundreds of Vancouver addicts who inject themselves with illicit drugs at a medically supervised site, a Supreme Court of Canada hearing on Thursday may hold the key to life and death.

For B.C. and the federal government, the looming legal battle is a vitally important clash over health policy that goes to the very roots of the Canadian Constitution.

Both levels of government argue that, under the arcane phraseology of the 1867 Constitution Act, they have the power to decide the legality of the Insite injection clinic - the only supervised injection site of its type in North America.

The sticking point lies in the fact that the Constitution gives the federal government authority over criminal law and the promotion of health and safety. But it gives provinces the right to decide how health care is delivered.

Who, then, has final authority when it comes to a facility where addicts can freely flout drug laws as part of a state-sanctioned strategy to save lives?

In legal briefs to the Supreme Court, both sides warn that an incorrect decision could open a Pandora's box of future constitutional ramifications.

"The plain truth is that, if Canada's arguments in this case prevail, then the federal government can expand any area of legitimate federal criminal law interest into an authority for the federal executive to effectively wipe out core areas of provincial jurisdiction," B.C. prosecutors Craig Jones and Karrie Wolfe cautioned.

Located in the heart of Vancouver's Downtown Eastside, the Insite facility has a dozen cubicles where approximately 800 addicts per day come to inject themselves. The addicts arrive with their own drugs, unimpeded by the police, who have agreed to give them safe passage in and out of the clinic.

B.C. and local health advocates for the clinic triumphed at trial, and at the B.C. Court of Appeal. However, federal prosecutors insist that the Supreme Court must not let provinces meddle with federal criminal law powers by creating a legal oasis for people who voluntarily consume drugs.

"The state has no constitutional obligation to facilitate drug use at a specific location by hard-core addicts, the mildly addicted, frequent users or occasional users," lawyers Robert Frater and W. Paul Riley argued in the federal brief.

If the lower-court findings are upheld, they said the result will be chaos. "The current national regime, which guarantees rigorous national standards of drug approval and access, would become a patchwork quilt of local decision-making," they said.

Mr. Jones and Ms. Wolfe counter that drug addiction is an illness, not a choice. They said that B.C. has every right to set up a clinic to alleviate suffering and death in a local, drug-ravaged community.

"The unique problems in that community are visceral to British Columbians and their government in a way that has no federal equivalent," the province's brief states. "British Columbians remember years in which hundreds of addicts died of overdoses in the streets and flophouses, and when hundreds more died from easily preventable blood-borne diseases such as HIV/AIDS."

To others associated with the case, constitutional niceties are an unaffordable luxury. The B.C. Nurses Union, a legal intervenor, says the facility has become a life-saver for addicts who would otherwise overdose in alleys and behind dumpsters.

"It would be devastating to lose it," said Tim Gauthier, a nurse at the facility. "The immediate consequence of losing it would be dead people. I have worked a lot of overdoses. You have four minutes before tissue death and organ failure with someone who isn't breathing."

Mr. Gauthier said the Insite battle boils down to an unyielding federal government that is married to a "war on drugs," versus the province's pragmatic acceptance of the fact that addicts will die in droves unless it brings them out of the shadows and helps them manage their addictions under supervision.

"Any place with a high concentration of users needs to have a place like this," Mr. Gauthier said. 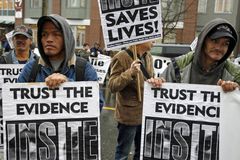 Vancouver's safe injection site cuts overdose deaths
April 17, 2011
Follow us on Twitter @GlobeBC Opens in a new window
Report an error Editorial code of conduct
Due to technical reasons, we have temporarily removed commenting from our articles. We hope to have this fixed soon. Thank you for your patience. If you are looking to give feedback on our new site, please send it along to feedback@globeandmail.com. If you want to write a letter to the editor, please forward to letters@globeandmail.com.
Comments