A convicted pedophile who was once the subject of an international manhunt for allegedly posting his sexual assaults of children online after hiding his face behind a digital swirl has been arrested at Vancouver's airport.

Christopher Neil was returning home to British Columbia after serving a prison sentence in Thailand for sexually assaulting a 13-year-old boy.

He was greeted on his return to Canada by members of the RCMP's Integrated Child Exploitation Unit as he stepped off a plane Friday night.

Mr. Neil had a bail hearing on Saturday morning and will appear before a judge on Monday, when a judge will assess his release or impose any conditions, said Corporal Mat Van Laer of the child exploitation unit.

Cpl. Van Laer said police obtained a warrant for Mr. Neil's arrest prior to his arrival at the airport because of fear for the public's safety, even though there's no evidence of any offence being committed in Canada.

"We felt that based on the severity and the nature of the crime that Mr. Neil has committed abroad it was important that we, at the very least, bring the intention forward to our courts and see what they have to say about that," he said. "Crown counsel has reviewed the evidence and the information that was brought forward about the activities of Mr. Neil abroad, and I suppose they felt, as we did, confident enough that some form of monitoring would be a good idea in this case so they issued an arrest warrant."

Mr. Neil, who once lived in Maple Ridge, B.C., had no fixed address when he was arrested Friday night, Cpl. Van Laer said.

Mr. Neil was caught after his swirly-faced digital photos were decoded by German computer experts so his face could be recognizable. Interpol circulated his photos, and tips allowed police to identify Mr. Neil, who was teaching English in Korea at time before fleeing to Thailand.

He was arrested in that country and surrounded by a throng of media. Television images of Mr. Neil entering a Bangkok courthouse at the time showed him barefoot, wearing an orange prison uniform and chained to another inmate.

He received a sentence of three years and three months after pleading guilty in the sex assault of the Thai boy after initially being sentenced to 6 1/2 years behind bars.

Mr. Neil was also alleged to have abused young boys in Cambodia and Vietnam several years ago.

Mr. Neil's brother, Matthew Neil, said in 2008 that he regularly received letters from his sibling imprisoned in Thailand, where he was attempting to learn the language. 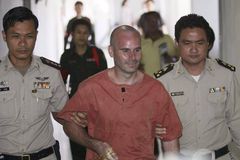 Suspected pedophile arrested in Thailand
October 19, 2007
U.S. bishop convicted for failing to report priest in child pornography case
September 6, 2012
Report an error
Due to technical reasons, we have temporarily removed commenting from our articles. We hope to have this fixed soon. Thank you for your patience. If you are looking to give feedback on our new site, please send it along to feedback@globeandmail.com. If you want to write a letter to the editor, please forward to letters@globeandmail.com.
Comments are closed