The B.C. government is offering parents $40 a day per child to cover daycare costs if the teachers' strike stretches into the new school year, a move blasted by the teachers' union as a "blatant and divisive attempt" to prolong the dispute.

While some parents say they appreciate the gesture, they also said they'd rather their children were back in the classroom come September. The labour disruption led to rotating strikes over three weeks in May and June before classes were cut short two weeks early by a full-scale walk-out.

"Yes, this helps me out financially from a break-even point of view, but it's not something I'm happy about," said Vancouver parent Darren Stott after the government announced the measure Thursday.

Mr. Stott said he wants his six-year-old daughter and his eight-year old son to be in a classroom learning, and he was skeptical of the government's motives in offering the subsidy, saying it appeared the B.C. Liberals were simply trying to win parents over.

Finance Minister Mike de Jong said parents of students under 13 will be invited to apply online to receive the funding for each child should the strike be unresolved when classes are scheduled to resume Sept. 2. He said the money is intended to be a "contingency" that will help parents make plans for September.

Families will be expected to use the subsidy to purchase tutoring for their children, explore other educational opportunities or pay for daycare, Mr. de Jong said. However, cheques would likely not be issued until October and the program will not be retroactive to cover days when teachers were off the job in June.

Union president Jim Iker characterized the offer as a "scheme to strip funding from B.C. students."

"This scheme will not help improve class sizes, increase support for children with special needs, or provide more one-on-one time for all students," Mr. Iker said in a statement.

The union leader said the government should instead focus its energy on reaching an agreement through mediation during the summer so classes can resume in the fall.

John Puddifoot, first vice-president of the B.C. Confederation of Parent Advisory Councils, said $40 a day may not be enough to cover daycare, much less tutoring, in some parts of the province.

"It will vary from city to city as to how far that money goes," Mr. Puddifoot said. "In Vancouver I don't think that will pay for a day of daycare. In other places, though, it will more than cover it."

Mr. Puddifoot said although parents are grateful for the financial help, offering a subsidy does little to resolve the labour dispute.

"We're certainly happy that there's a recognition that the people who are being impacted by the strike are the kids and the parents, not the people at the table," Mr. Puddifoot said.

"Hopefully this is just a contingency plan and it doesn't need to be used."

More than 40,000 teachers launched a full-scale strike about two weeks before school was set to end in June, after three weeks of rotating strikes and other job action. The government locked out teachers in the last days of the term and summer school was cancelled.

Little progress has been made in resolving the conflict over the summer and no talks are scheduled.

Mr. de Jong said the parents of approximately 300,000 students would be eligible to collect the subsidy, which would be funded from the $12-million the government saves daily in teachers' salaries during the school year when there are no classes.

"We have five weeks. And that's why I … emphasize this is a contingency that we want people to know about as early as possible so that as we move through August they can plan accordingly. But I'll be the first to tell you I hope it's a contingency we don't have to rely on."

For Mr. Stott's children, the prospect of not going back to school in the fall is devastating.

"Our kids love school," Mr. Stott said. "You can imagine the idea of the strike carrying on into September is very frustrating for them." 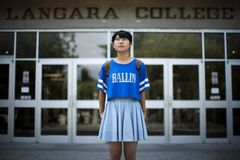 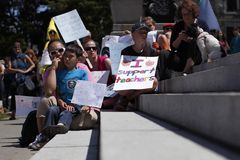 Cost of Supreme Court’s B.C. class-size ruling is a math test in itself
July 3, 2014 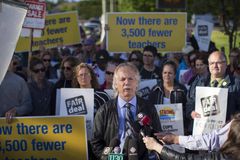 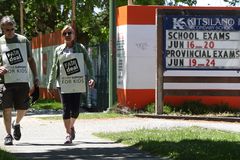 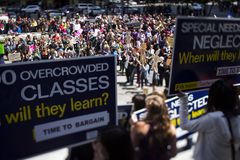