B.C.'s escalating problem with urban deer has gotten so bad that the province pledged $100,000 and other forms of support Thursday, as communities struggle with aggressive animals and community fights over what to do about them.

While Vancouverites fell in love with their single "downtown deer" that roamed Stanley Park and occasionally the city until it was killed in a car crash earlier this month, the deer issue is far from cute elsewhere.

Oak Bay Mayor Nils Jensen said there has been a dog killed, another one injured and residents chased down the street by deer in that Victoria-area community.

"People, seniors, are afraid to go outside," he said at the Union of B.C. Municipalities (UBCM) session where the new funding was announced.

It cost his community $16,000 to capture 11 deer and deliver the meat to local First Nations earlier this year.

In Princeton, Councillor Doug Pateman said the town spent $60,000 to electrify a fence, $25,000 on a barrier to its landfill and another $5,000 for a deer committee, as that town grapples with the issue.

In Invermere, which has seen huge protests and lawsuits launched over its plans to cull deer, the town now budgets up to $30,000 to have 30 deer killed per year. That's on top of the legal costs it had to carry.

Mayor Gerry Taft said it's not about annoyances, like deer eating people's gardens. "The real issue is public safety."

He said when he grew up in Invermere, dogs would chase deer and the deer would run away. Now deer chase dogs (even those on leashes) and will attack by rising up on their hind legs to fight.

Mr. Taft was pleased to see the long-awaited response from the provincial government, even though he and others said $100,000 doesn't come anywhere near covering the costs that municipalities are taking on as they tackle their deer problems.

"At least the province has, for the first time, said they should share some of the costs," he said. Until this week, the ministry of forests has said deer were strictly a local-government problem.

Jeff Morgan, the province's manager of fish and wildlife in the forests ministry also told the UBCM delegates that a permanent "urban deer advisory committee" will be established to work out the many other issues.

Some of those issues resurfaced at the UBCM session, as councillors and mayors at the meeting reiterated complaints from past years.

The issue of urban-deer problems started to surface at the UBCM in 2003 and, at first, was confined to a handful of communities. When the forests ministry held a workshop in January to start planning a provincial response, representatives from 11 cities, towns and districts attended. They included Coquitlam, in the Lower Mainland, the regional district around Victoria, and Kelowna.

There will likely be more.

One councillor from Pitt Meadows said residents are starting to report a sharp increase in the number of deer being sighted.

One man "has asked for a deer-crossing sign. I've said that deer don't read," joked Councillor Janis Elkerton. But, seriously, she added, it would help if the province had a standardized sign to warn drivers about the potential for deer leaping out onto the road.

A sign that Vancouver might have to put up in Stanley Park, if urban deer keep moving in. 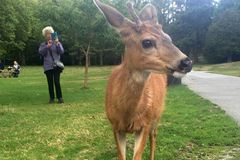 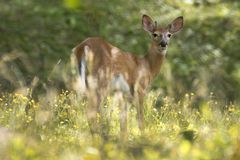 The ancient skill of hunting is about humility and respect for animals
August 2, 2015 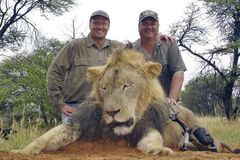