B.C. Premier Christy Clark opened up this week about the personal experiences that led to her decision to adopt legislation that tackles sexual violence on campus, saying women in power can help end the silence that allows such crimes to go unpunished.

The Premier explained, in an opinion article, how shame stopped her from reporting an incident when she was 13 years old: A stranger grabbed her and dragged her into the bushes as she walked to a waitressing job in Burnaby, B.C. She managed to escape the man's grip and fled straight to work, telling no one about the attack.

"I am speaking out because as Premier of British Columbia and B.C.'s first elected female premier, I am privileged to have a public platform," she wrote. "Shame is painful. It's also pervasive and isolating, but the capacity to survive and heal is achievable through the sharing of our experiences."

The Premier explained she was prompted to reveal her own story after she was challenged to adopt Green MLA Andrew Weaver's bill on sexual violence at postsecondary institutions. Although the B.C. government rarely acts on bills drafted by the opposition, she said she instantly decided to take up the proposal.

"As I sat in my chair on the floor of the legislature, it struck me: I knew all too well why women stay silent. For over 35 years, I've been one of them. … I was ashamed."

In the following weeks, she spoke to other women about her memories – also of groping, flashing and sexual advances – and they shared similar experiences. "Many of their stories are much worse; horrifying events [that] will take years of determined effort to heal. Nonetheless, many of us share something in common: We have never spoken about it, not to the authorities, or our parents or spouses," she wrote. "Sexual violence is common. Unfortunately, so is staying silent about it. Our silence makes it easier for those who wish to harm us."

Her surprise revelation comes in the middle of international reflection about sexual violence against women. In California, 20-year-old Brock Allen Turner received a six-month sentence after being convicted of three felony counts of sexual assault on an unconscious young woman, sparking a public debate about what is viewed as a lenient sentence against a privileged white male. In Brazil, the case of a teenaged girl from a low-income family who was gang-raped – and whose attackers proudly shared selfies and videos of the assault on social media – has launched national soul-searching about sexual violence, class and gender.

Across Canada, the slow shift toward gender equity in politics has created opportunities for female politicians to use their own stories of sexual and domestic violence to launch conversations and sometimes, to change policy.

Last November, Maria Fitzpatrick, Alberta's NDP MLA for Lethbridge-East, told her story of domestic violence when she rose in the legislature to support legislation that would allow people to break a lease without penalty if they are escaping an abusive situation.

Her harrowing tale left fellow MLAs in tears – and ensured the adoption of the private member's bill.

"Broken bones, black eyes, sexual assault and two miscarriages as a result of this abuse were only some of the physical atrocities I had to endure," Ms. Fitzpatrick recounted, her voice breaking. There was psychological abuse too: Her husband held a gun to her head and pulled the trigger, laughing at her reaction to the clicking sound from the hammer in the unloaded weapon. Twice, she went back to him because she could not support her family on her own. "My children have been scarred for their lives and I will be horrified if anybody in this chamber votes against this bill."

Although women are still under-represented among the country's elected officials – one in four Canadian politicians is a woman – an increasing number are using their position to press for change.

Nancy Peckford at Equal Voice, a national organization that aims to increase the number of women in politics, said sharing such personal accounts can have a powerful impact, but it takes courage to take on issues that can burn up political capital.

"Premier Clark has chosen this moment to take that political risk," she said. "Where elected women have taken this risk, it creates space. It gives everybody – men and women – permission to address it and generate the political conditions necessary to pursue solutions." 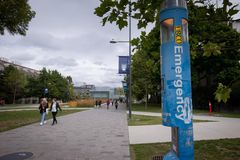