First Nations protesters at a salmon farm off the northern coast of Vancouver Island are vowing to stay, despite court action aimed at forcing them out.

Marine Harvest Canada, which runs the farm, has asked the B.C. Supreme Court for an injunction to remove protesters from its Midsummer Island farm, located about 50 kilometres east of Port Hardy in the Broughton Archipelago.

A hearing for the injunction is set for Tuesday morning.

Molina Dawson, a protester with the Musgamagw Dzawada'enuxw, said the group is concerned about what impact fish farms are having on wild salmon in the area.

"Our culture is very much intertwined and reliant upon having these salmon and the rest of our wildlife. If we lose the salmon, we lose a huge part of our culture," she said.

Dawson and several others have been at the Midsummer Island farm for more than two months, and plan to stay until the company removes all of its fish from the territorial waters of local First Nations.

Spokesman Ian Roberts said the company has delayed its work at the farm in hopes of having discussions with the protesters.

"We were hoping for discussions with these First Nations people that have issues with our business, but to date they've granted no meeting whatsoever," he said. "So we will have to continue to take care of our fish and our employees and hope in the future that dialogue starts so we can talk about long-term solutions."

Dawson said she personally has not heard from anyone at Marine Harvest, but would be open to a meeting.

The company resorted to court action due to concerns about the safety of both staff and protesters, and about the welfare of the fish, Roberts said.

Structures have been built on the facility's narrow walkways, he said, making it difficult for employees to do their work.

"We've asked them to leave numerous times. Last week we demanded that they leave and given that they didn't leave our workspace, we've had to officially make application for a court order," he said.

But Dawson said it doesn't make sense for the company to kick First Nations people off their traditional territory.

"We've done nothing wrong," she said. "We've tried to make sure everyone who comes on the farm is respectful. We haven't broken any laws. We're here respectfully."

The issue is also about Indigenous rights, Dawson added.

"We've never given consent for this industry to operate in our waters."

Marine Harvest said in a statement that its current tenure licenses were granted in 2013 following five years of consultation with several First Nations with interests in the area. Those licenses are valid until June 2018.

It's important to discuss with First Nations about who has rights to that area, Robert said.

"We think that's a very important conversation that has to happen because businesses in British Columbia need clarity on the process," he said. "We ask that the First Nations in this area be part of that process and voice their concerns around a table and not dangerously on our workspace."

The government has not issued any licences for new fish farms since 2015 while a review of aquaculture policy and licensing is underway.

B.C.'s Agriculture Minister Lana Popham said in statement on Sunday that she expects to receive a report on the review "soon."

Popham said the province is committed to protecting B.C.'s wild salmon and that she will work with all parties involved to make sure the aquaculture sector is "environmentally sustainable and respects First Nations' rights while continuing to provide good jobs for British Columbians."

"We believe negotiation is the best way to resolve issues and we look forward to continuing a respectful dialogue with all parties," the statement says. 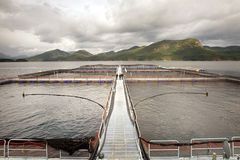 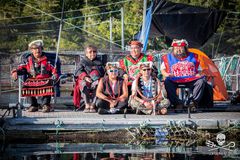 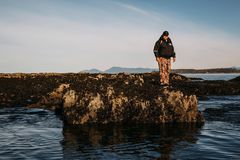