The prospect of a liquefied natural gas industry in B.C. would be a game-changer for aboriginal communities, Premier Christy Clark said on Wednesday. But she sidestepped the question of what happens if some of those communities continue to say no to the developments.

Instead, Ms. Clark's announcement about a major step along the path toward securing the Pacific NorthWest LNG plant – a proposal already rejected by the Lax Kw'alaams – left the door open to pushing the project through, despite the province's preference to avoid a confrontation over aboriginal rights and title.

"We are hopeful we will get there," Ms. Clark said, adding that her government continues to be involved in helping address the concerns of the Lax Kw'alaams community.

The Pacific NorthWest LNG export terminal and pipeline project would mean a $36-billion investment – the biggest single investment in the province's history. It is just one of 19 LNG proposals on the books, but probably the most advanced.

Federal Minister of Industry James Moore, standing at the Premier's side in Vancouver on Wednesday as she announced new terms to provide LNG investors with long-term certainty, said establishing an LNG industry on the West Coast would benefit the entire country.

In legal terms, if Canada and B.C. decide to approve the project without full aboriginal consent, that question of the greater good will be at the core of the issue.

Last June, the Supreme Court of Canada issued a landmark ruling on aboriginal rights. The case, led by B.C.'s Tsilhqot'in Nation, granted powerful leverage to First Nations over development by outsiders, but not a veto.

The court says governments can, in certain cases, justify overriding the wishes of a group holding aboriginal title on the basis of the broader public good. The government must demonstrate that it has executed its duty to consult and accommodate, and that the infringement is required to meet "a compelling and substantial public interest."

John Rustad, B.C.'s Minister of Aboriginal Relations, said that is an unpalatable option.

"There is a legal opportunity that can be pursued. We are not planning to pursue that; we would like to find a negotiated path forward," Mr. Rustad said in an interview. "The courts have said it is available. … We don't want to go there."

Although it is not the preferred path, his government is prepared to override the objections of First Nations in the Peace River Valley over its plans to build the Site C dam.

In the case of LNG, the B.C. government maintains it has social licence to develop this new industry, which hinges in large part on winning First Nations' approval. The government has been in talks with communities involved in potential LNG development from the wellheads to the export terminals at the waterline.

There is a risk of a backlash if the government were to override the Lax Kw'alaams, a Tsimshian community of 3,600 people that last week rejected the $1.1-billion offer from the proponent of Pacific NorthWest LNG. Band members say the proposed export terminal on Lelu Island would imperil juvenile salmon from the Skeena River that shelter in the surrounding eelgrass beds.

Grand Chief Ed John of the First Nations Summit said both government and industry have to accept that judgment and work to find a solution that accommodates those concerns.

"They could retain the right to infringe, but given the situation, I think the better policy would be to obtain the consent through consultation," he said. "That's a far superior option. The other leads to a path of conflict and acrimony."

He said the Lax Kw'alaams people have delivered a message that food security will trump short-term economic interests. "I think prudence would say it may be worthwhile to look at alternative sites." 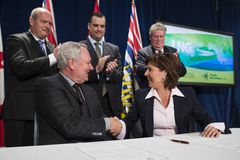 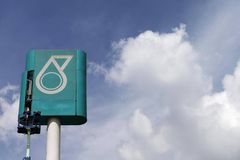