Watching a maintenance man hose down the pavement in a Gastown courtyard each morning was too much for Paul Done. He called the building out on Twitter and asked the city's bylaw enforcement office to intervene.

Mr. Done, a mountain biker who says his North Shore adventures regularly take him past two main reservoirs with water levels that already look like those of summer's end, is part of a growing chorus of residents taking to social media or calling in the authorities to "drought shame" neighbours who water their lawns more than once a week or businesses that wash their sidewalks for "esthetic purposes."

"The guy was out there pretty much every single day," Mr. Done said. "They actually lock that place up at night, so it's not like you're spraying an alley, where during the night you might have had some [human waste] that needs to be cleaned up."

As the haze from forest fires still lingers across much of British Columbia's South Coast, cities across Metro Vancouver have stepped up the policing of their new water-use restrictions – some of the toughest in more than a decade. Since last month, Vancouver bylaw officers have issued 755 warnings and five tickets for violating the new rules – about the average for a whole summer in recent years; over the past two days, about 100 people have called in complaints. Other cities in the region have reported a similar spike in reports.

Vancouver now has as many as 14 bylaw officers patrolling neighbourhoods, and the city is telling its citizens that "a brown lawn is not a dead lawn."

Mr. Done said he's "not normally meddlesome" but wants to help crack down on scofflaws because "I don't think people are taking this situation nearly serious enough."

"No one really understands the severity of the water shortage we're facing," he said. "And if it means shaming people and accosting them and telling them and making noise about it – it's got to start somewhere."

The dry weather has brought renewed calls for international conglomerate Nestle and other companies to pay more for drawing B.C. groundwater, then bottling it and selling it back to people. An online petition has garnered more than 160,000 signatures asking the provincial government to charge industrial users such as Nestle more than $2.25 per million litres when the province's new groundwater law takes effect next January. The company has said it takes less than 1 per cent of the local water supply and has had no negative impact on the watershed in its 15 years of operation.

Meanwhile, the restrictions in other parts of the province are becoming more severe. On the east coast of Vancouver Island, the Regional District of Nanaimo imposed its most serious restrictions Thursday. Due to a drought that could seriously affect firefighting efforts in the region, officials banned all outdoor water use except for soaking gardens with watering cans or hoses with nozzles that shut off automatically.

John Innes, dean of the University of British Columbia's forestry faculty, said experts have long predicted an intensely dry, hot summer like this in B.C. And while people are more aware of how climate change intensifies these problems, the region has not "been particularly good at water conservation."

"We tend to assume that we have pretty limitless water," he said. "How often have you heard people telling you to limit the length of a shower? … I would view this summer as being a test and a demonstration of what's to come. I think we should learn from it as much as we can."

Metro Vancouver says its water conservation programs have led to a 27 per-cent reduction in per-capita water use since 1993, in part thanks to restricting the use of lawn sprinklers to twice a week at the start of June. Over an hour, a sprinkler can use as much water as "25 toilet flushes, five loads of laundry and five dishwasher loads," according to a news release from the region.

Prof. Innes said the region needs at least a day or two of "intense rain" before reservoir levels rise again and the risk of wildfires is downgraded. But even then, if the hot, dry weather returns, the brush that fuels the fires will once again dry out "pretty quickly." 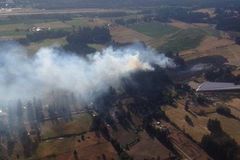 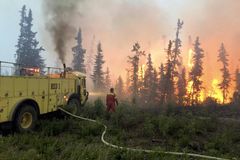 Pemberton festival to go on despite wildfire and smoke threat in B.C.
July 8, 2015 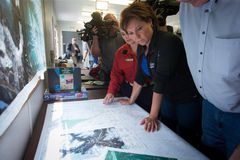