Battered by severe storms, raked by late summer snow flurries and with ice blocking their route ahead, a team of four men from British Columbia has abandoned a bid to row across the Northwest Passage.

"We were really not stopped by the ice per se. We were stopped by . . . crazy, erratic weather that was just knocking us all over the place," said Kevin Vallely, a spokesman for the group, which launched the voyage in early July.

The expedition was to draw attention to the impact of global warming on the Arctic by illustrating that the Northwest Passage is now largely ice free.

Mr. Vallely said even though they failed to reach their destination, the expedition – largely sponsored by Mainstream Renewable Power, an energy development company – was a success because it highlighted the extreme weather that comes with climate change, and the team's blog got a lot of people debating the issue.

The team – Frank Wolf, Dennis Barnett, Paul Gleeson and Mr. Vallely – had hoped to row their seven-meter boat about 3,000 kilometres across the Arctic, crossing from Inuvik, NWT, to Pond Inlet, Nunavut, in 75 days.

Instead, they quit at Cambridge Bay, about the half-way point, after 55 days with some 1,500 kilometres of the Northwest Passage still in front of them.

In an interview in Vancouver on Tuesday, Mr. Vallely said the rough weather started just a few days into the trip with heavy headwinds that slowed their progress.

From there things got a lot worse.

One night, the crew was jolted awake when something hit their anchored boat.

"I looked out and all I could see was a wall of white," Mr. Vallely said.

A drifting block of ice "the size of a small building" had banged into the boat and was slowly driving it under water.

"I cut the anchor rope just as the bow started to go down," he said.

Storms were unpredictable and often dangerous.

"There were some intimidating moments," Mr. Vallely said, recalling a squall that caught them in the open and began to push them out to sea towards a wall of pack ice.

"One minute we were coming in this ice fog and the sea was glass … the oceanic swell started to come in from the Amundsen Gulf and it was massive. It was like the breathing of the dragon.Then, literally, it was like someone flipped a switch and this wind started to pummel us. It was 25, 35 knot winds, full on storm force for us and there was this crazy current … we were being spun around without any control.

"We knew there was pack ice out there, and if we got caught out there in those conditions, I don't even want to think about what would have happened. We'd have been crushed and nobody could have come to get us."

They found landfall on a 40-metre beach that opened in a black cliff on a small island that loomed out of the fog.

Three members of the team have extensive wilderness experience. Mr. Vallely, an architect, has skied 1,800 kilometres across Alaska and trekked to the South Pole; Mr. Gleeson, a self-employed personal adviser, rowed across the Atlantic Ocean in 2005, and Mr. Wolf, a filmmaker, has cycled more than 2,000 kilometres across Alaska and the Yukon. Mr. Barnett, who works in the shipping industry, was on his first expedition.

Mr. Vallely said they all wanted to complete the crossing, but with the days getting shorter and temperatures dropping, it was a unanimous decision to call a halt in Cambridge Bay.

An ice forecaster who was providing bulletins to the team warned them the inlets ahead were beginning to ice up.

"We'd have got frozen in one night and somebody would have had to come get us," Mr. Vallely said in describing what would have happened had they pressed on from Cambridge Bay. 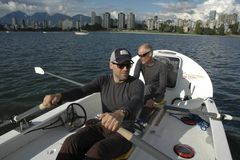