If a developer wanted to find an ideal community in which to build a residence for seniors, it would be hard pressed to find one better than Summerland.

Blessed with a perfect climate and gorgeous views of Okanagan Lake, the small town has neatly groomed public parks, swimming beaches and hiking trails. It is surrounded by a pastoral landscape of orchards and vineyards.

Business Vancouver recently chose Summerland, located between the cities of Penticton and Kelowna, as one of the top five places to retire in British Columbia. No wonder then that Lark Group, a Surrey-based developer, chose a site near the waterfront in Summerland for a proposed, 376-unit, $125-million complex for a new seniors' village.

But the development, which would create 75 to 100 jobs and bring the town $400,000 in annual taxes, is running into a lot of opposition from local residents who apparently aren't quite ready for a seniors home – or at least, not this one, not there.

"Shock," is the word Eric Tait uses to describe how he and many of his neighbours feel about the proposal to build the five-storey complex in Lower Town, a residential area about three kilometres from the town's centre. The site is a 14-acre parcel of land cupped in a small basin known as Bristow Valley, which is backed by steep clay banks. It currently has a vineyard on it, is surrounded by important wildlife habitat, and sits atop natural springs, which supply the nearby Summerland Trout Hatchery with a steady flow of cold, clean water.

"There is strong, strong opposition to this," Mr. Tait said of the proposal, which is currently before Summerland council, with public meetings planned for January.

But isn't housing seniors a vital service in any community, especially in an aging community where half the 11,000 population is 55 or older?

"Of course, yes, I believe this is necessary," Mr. Tait said. "If you want to build this facility for that, yes, we'd love to have it – but not in that location or on that scale."

Mr. Tait said a key concern is that run-off from the site could pollute the springs with oil or sediment and cause the oldest trout hatchery in B.C. to shut down.

"We think the hatchery will not survive the development," he said.

Hatchery manager Kyle Girgan declined to comment on the development, but did say that without pure water flowing from the springs his hatchery would be out of business.

"In terms of rearing fish, it's absolutely perfect," he said of the spring water. The hatchery started operations in 1918 and produces one million trout a year for stocking in 300 Okanagan lakes.

There are other fears, as the public comments posted on the District of Summerland website make clear. People expressed concern about increased traffic, the loss of agricultural land, the impact of having up to 600 new residents in a small town and about wildlife displacement.

"We are shocked and dismayed to hear that you would even consider rezoning the Bristow Valley for development," Diane Ambery wrote to council. "It is a stunning vista and home to deer, bear, marmots and other wild creatures."

"This valley is one of the last pristine natural beauty areas left in Lower Town," Arend and Josefa Dronkers wrote.

Others said the location is wrong because it is too far from the shopping district for seniors to walk and they urged council to relocate the facility closer to the town core.

Kirk Fisher, senior vice-president of Lark Group, which hopes to get permits to build the facility, said he's noted the concerns, but believes the project will find broad acceptance once people know more about it.

"That's why we have public information meetings because you get scared of these things until you really understand [the details]," he said. "Of all the seniors' communities that we've built people are always concerned to begin with and then after they hear all of the data and all of the information they are in support usually."

He said a hydrological assessment shows construction can take place without harming the springs and precautions will be taken to prevent environmental damage to the surrounding landscape.

"Our experience from building seniors villages is that while people do need to go into town every once in a while ... they more need to see distant, beautiful nature. That's what makes them healthy," he said. "They don't want to live in a town and not have a pretty view."

"Everyone will be there," he said of the public meetings planned by council. 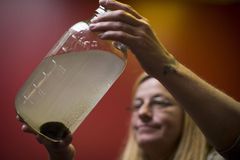 B.C. to fix section of Highway 99 that has been sliding down mountainside
April 11, 2017
Follow Mark Hume on Twitter @markhumeglobe
Report an error Editorial code of conduct
Due to technical reasons, we have temporarily removed commenting from our articles. We hope to have this fixed soon. Thank you for your patience. If you are looking to give feedback on our new site, please send it along to feedback@globeandmail.com. If you want to write a letter to the editor, please forward to letters@globeandmail.com.
Comments