With the number of asbestos-related deaths continuing to climb across Canada, a B.C. union leader is calling for the urgent creation of a national registry of public buildings and marine vessels containing the heat-resistant fibrous mineral that causes cancer.

Asbestos is now recognized as a hazardous material, but workers exposed as long as 40 years ago, when the material was widely used in construction and other industries, continue to be diagnosed with asbestosis and mesothelioma cancer.

In a recent statement, WorkSafeBC said the number of asbestos-related fatalities, which was expected to peak in about 2015, is still climbing, and the high number of deaths may continue to grow for several more years. Statistics Canada data show that, in 2012, the most recent year for which national statistics are available, there were 560 new cases of mesothelioma, up from 276 in 1992.

And there are new fears that a younger generation of workers, not as acutely aware of the asbestos threat, are getting exposed in older buildings that contain the material. Of particular concern are those doing renovations and demolitions, where dust containing asbestos fibres can easily be inhaled.

Philip Venoit, who for the past 14 years has been president of Vancouver Island Building and Construction Trades Council, representing 7,000 workers, has written to the Prime Minister's Office and to several premiers and mayors across the country. He has had no response from the PMO or from premiers, but says several mayors have expressed support. A first letter was sent last summer, which he thinks was ignored because of the election campaign, so he wrote again just before Christmas.

"As a 35-year construction and shipyard electrician, I have watched many friends and co-workers diagnosed with pleural plaques on their lungs and asbestosis," he said in his letters. "This diagnosis is nothing less than a death sentence; they slowly and prematurely wither away, and die an agonizing death due solely from breathing while at work."

He called on federal, provincial and municipal governments to develop a national registry of all public buildings and vessels, such as navy ships, "and to make that registry online and available to all restoration and construction workers." He said the registry should identify the types of asbestos products in the buildings – such as floor tiles, ceiling tiles, insulation, drywall and pipe cladding – and provide instructions on how best to remove that material.

Mr. Venoit released his letters recently, shortly after WorkSafeBC announced statistics showing that 196 workers in the construction trades died from disease in the province, between 2016 and 2015, compared with 141 who died from workplace injuries.

Mr. Venoit is worried that, as older workers retire, the younger generation won't be as cautious about asbestos, seeing it as an old and faded threat.

"The baby boomer generation is well versed in asbestos," he states in his letter. "We are on the eve of mass retirement with a new generation of workers who know very little of the harmful effects asbestos exposure can cause."

Mr. Venoit said government needs to develop a national apprenticeship program to ensure young workers know how to safely work with asbestos, and he said Ottawa should ban imports of asbestos. Although Canada's last operating asbestos mine closed in Quebec in 2011, the government still allows the import of asbestos products.

"We import all kinds of products that contain asbestos for no good reason other than it might be cheaper," Mr. Venoit said. "Believe it or not, we are still importing asbestos in children's crayons, and I think as a parent of young children Prime Minister Trudeau should be worried about that on behalf of all Canadians. … I've got high hopes the new federal Liberals will take a hard look at this."

Al Johnson, WorkSafeBC's prevention service vice-president, said it is impossible to say when the wave of asbestos-related deaths might peak. "It's not an exact science," he said of trying to predict how many workers might yet be diagnosed with the disease.

Mr. Johnson said many of those recently diagnosed were exposed decades ago, but WorkSafeBC is also concerned about workers being exposed now.

"Years ago electricians, pipefitters, they were installing asbestos products into pulp mills, into refineries, into ships and into shipyards," he said. "For the most part, the gross exposures to asbestos [in industrial settings] aren't happening any more. … The exposures that are occurring today, however, are in the commercial industry."

Jennifer Leyen, director of special care services for WorkSafeBC, said the numbers of workers with asbestos-related diseases is probably much higher than current records indicate. It is suspected many people haven't made claims to WorkSafeBC, she said, because the disease often emerges long after people have left the work force.

Glen Godden, 89, didn't discover he was ill from asbestosis until several years after he retired. "I noticed I was starting to have trouble just doing ordinary things like helping the wife clean the house. … I was getting short of breath."

A check found spots on his lungs. So far, cancer hasn't developed, and he considers himself one of the lucky ones. "A lot of the guys I worked with passed away [from asbestos-related cancer] quite a number of years ago now," he said. "They were younger than me and unfortunately they didn't make it."

Mr. Godden worked installing piping in pulp mills, refineries, mines and chemical plants. Asbestos was widely used, but no one ever warned him it was dangerous. He said his children followed him into the trades, and he's cautioned them "everywhere you go, there's still a lot of asbestos in the plants."

Tracy Ford's father, Dave Ford, died from mesothelioma in 2008 at the age of 70, just a few years after retiring. He was an electrician and worked in pulp mills. "I know people knew there were asbestos products in the mill, but because of the type of work he did I don't think he realized he was at risk," Ms. Ford said.

Had he known, he would have taken precautions, such as wearing coveralls and an air purifying respirator. "He was extremely safety-conscious," she said. "When my brothers and I as university students worked at the mill, he hounded us about health and safety stuff, you know, made sure we always wore our goggles and had hearing protection. Health and safety was a big part of what he did."

Ms. Ford said her family is angry about her father's death, because it needn't have happened.

"Basically it had been known from the early fifties that asbestos was carcinogenic – and workers weren't told," she said. "I think that's one of the really disappointing things. People were exposed unknowingly and their employers, or the manufacturers, or the government could have told them."

Ms. Ford praised the unions and WorkSafeBC for raising awareness about the continuing dangers of asbestos. "It's important to get the word out to workers," she said. "A lot of young people … have never heard of asbestos [and have] no idea there is this thing in their environment that could kill them." 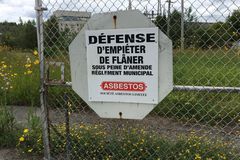 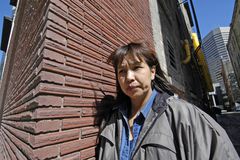 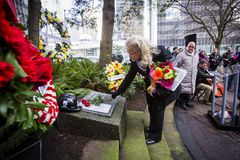