The Globe and Mail is looking at people who have been touched by the refugee crisis in British Columbia, from sponsors and teachers to the refugees themselves.

Born in Cairo, Ms. Elwan speaks English, French and Arabic and has worked for government and non-governmental organizations in the Middle East for more than a decade on issues including domestic violence and child marriage.

So she was particularly attuned to challenges facing women refugees, including language and cultural barriers that can make it more difficult for women to look for work or make new friends.

Opinion: I'm a Syrian refugee in Canada: This is what 2016 meant to me

Read more: Finding a home, away from home: Refugees, sponsors and what it means to be Canadian

But she also knew many newly arrived refugee women were superb cooks, steeped in the intricacies of Syrian cuisine and accustomed to cooking for large numbers of people at family or community gatherings.

That became the seed for a fledgling food venture that is now spreading its wings. Ms. Elwan arranged startup funding of $500 through the Vancouver Foundation's Neighbourhood Small Grants program. Ms. Elwan does not receive any compensation and is helping the group as a volunteer.

What is 'Tayybeh: A Celebration of Syrian Cuisine' – and what does Tayybeh mean?

Tayybeh is a food company run by recently arrived Syrian women refugees. To date, it has done a "pop-up" dinner and several catering events. Any proceeds go to chefs, ingredients and transportation for future events.

In Arabic, Tayybeh is the feminine form for 'kind,' and in the Levantine dialect, it means "delicious."

How did Tayybeh come about?

I came to know some Syrian refugees through private sponsorship groups and local agencies when I volunteered to help with translating and other support for new arrivals. I reached out to Immigrant Services Society of B.C. to find women who might be interested in potentially earning some income through a food venture and who were known for their culinary abilities.

When I first spoke to them over the phone to see if they were interested in the initiative, I had no idea we would become such close friends.

We have about five women who are currently involved and others are interested in joining.

What was your first event?

Through friends, I was able to arrange access to the kitchen and dining areas of Tamam, a Palestinian restaurant in Vancouver, on a day it was closed.

We created an event on Facebook and did absolutely no advertising, and all the tickets sold out in less than 12 hours. The support blew our mind and was immensely humbling for Tayybeh and the chefs.

People loved the food – many saying it was the best Middle Eastern food they'd ever had.

Most said we had set the price of the tickets too low, given the quality and quantity of the food – and told us they would be prepared to pay up to twice as much as [what we had charged] for the experience.

The applause that the women got was so touching. For many of them, this was the first time they've ever earned an income for work they have done – and the first time to celebrate anything since the beginning of war in their country.

Once the dinner was over, all of the women broke into impromptu singing and clapping. It was a teary-eyed moment of inspiration for all of us.

Really, that was the moment when Tayybeh was born – when the idea for a single dinner turned into something that needed to continue.

What has Tayybeh done since?

Since then, there have been several catering jobs – including food for a hackathon focused on providing support to Syrian refugees and a dinner for staff and supporters of a rape-crisis centre.

All of the women involved have obtained Level 1 Foodsafe certification.

[The group's next event is scheduled for January, at a church that has sponsored one of the women in the group.]

In Toronto, a project called Newcomer Kitchen has developed a model that features meals cooked by Syrian refugee women and sold online for pickup or delivery. Its website says it wants to grow into a non-profit that can replace this idea "with any newcomer group, in any restaurant kitchen, in any city in the world.' What would you like Tayybeh to become?

An open door for any Syrian woman to generate income and to find a community that embraces them.

It could be structured as a non-profit organization, or as a business. There are pros and cons to each. I have been blown away by how much people want to help. I have had people saying they want to invest and help it grow. But we are taking it slow and figuring out what will work best for the women involved.

How have the women's families responded to Tayybeh?

Husbands and children have been extremely supportive. Whether it is helping them manage time, shop for groceries, take photographs of the finished meals or deliver food – all hands are on deck.

We are trying to think of ways to include the rest of the family and for the men to potentially generate an income, as well – but these are ideas we are still exploring.

We have also benefited from enormous support from "Friends of Tayybeh" – someone designed a logo without charge, others have volunteered to deliver food to venues or for other tasks. We have been calling them our "Tayybeh Angels" because they have stepped in to carry the weight at critical times. 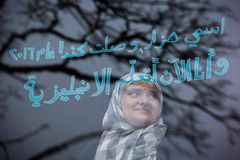 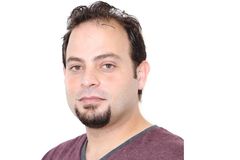 Finding a home, away from home: Refugees, sponsors and what it means to be Canadian
June 30, 2016 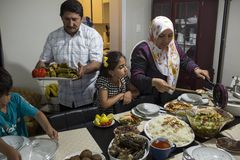