Passersby stop in confusion when they first see it.

A longboard store, dead in the heart of a Chinatown once dominated entirely by tea shops, basket and bamboo emporiums and restaurants of the Jade Garden and New Town variety.

"The 70-and-up crowd, they come and peer in the window and then walk away. I don't know what they're thinking of it all," said Mischa Chandler Farivar, perched behind the counter of the five-month-old Flatspot Longboards on East Pender, Vancouver's most historic Chinatown street.

But others come in, Chinese kids with their parents. The parents reminisce about coming to Chinatown with their families for far different reasons when they were young. The kids eventually leave with a longboard – an edgier form of skateboard – paid for by the nostalgic parent.

Mr. Farivar, 21, is part of the newest wave of gentrification to wash over Chinatown and the Downtown Eastside. It's one that is generating another round of protests from advocacy groups fighting to keep the area feeling like home to its traditional poor residents.

But the newcomers are being welcomed, even encouraged, by the Chinatown business establishment and the old-time Chinatown associations.

In fact, Mr. Farivar and a cluster of new business owners around him have all rented from the Chinese Freemasons, the benevolent association that operates two commercial buildings and two housing non-profits in the area.

Those new businesses include a row of four stores along Columbia Street around the corner from Flatspot – Duchesse, a vintage store; The Shop, a space that sells coffee and clothing with a vintage-motorcycle theme; two art galleries – and a German-sausage-and-beer deli called Bestie about to open across the street on Pender.

Several blocks away on the edge of Chinatown, another entire block has turned into a poster row of new Vancouver businesses: clothing stores like Charlie & Lee and Board of Trade Co., and locavore-themed food operations like Harvest and The Parker.

Many of the new business owners are a slightly different crowd from the previous waves of gentrification the past decade in Chinatown, which included Bob Rennie's real-estate business and art gallery, some high-end furniture shops, and hip restaurants and bars like Bao Bei and the Keefer.

These new businesses operate on the smallest of margins. The owners reject the idea that they are gentrifiers. And they live near the area – sometimes even in it.

"I think we're the first Caucasians to live in this building since it was built in 1911," said Mr. Farivar. He and his partner, as part of their lease, are renting small apartments above the longboard store and getting to know their new neighbours – a mahjong club, several older Chinese men renting small rooms, and the Freemasons' headquarters.

The two young men about to open Bestie say they see themselves as serving a local market.

The two raised $16,000 through Indiegogo, an online crowd-funding platform, which essentially asked future customers to buy meals in advance.

"A lot of people who bought cards live and work in the area," said Clinton McDougall, noting that the area is filled with graphic-design, film, app-development and art studios. "Our mainstay is those people like us."

Mr. Farivar grew up in Toronto's Kensington Market, which is part of that city's Chinatown, so he understands some of the concerns about people like him moving into Vancouver's Chinatown.

"I watched Kensington Market get gentrified, people get pushed out," said Mr. Farivar, who is also completing a degree at Quest University in Squamish. He doesn't want to push anyone out, and is working hard to fit into the area without performing "cultural appropriation."

But he also says Chinatown is inevitably going to change.

"I don't think it's fair to the rest of Vancouver to keep this neighbourhood inhibited. If you don't want gentrification to be so detrimental, you need to take some ownership."

That echoes what local Chinese business groups and associations are saying.

"We're quite pleased with the way this is working out. It's diversification," said Gil Tan, the real-estate director for the Chinese Freemasons who decided to rent storefronts to Flatspot, Bestie, Duchesse and the others.

"Somebody did ask, 'Is that appropriate to have a longboard shop in Chinatown?' But I said the only way to revitalize this area is to bring people in. I like those shops. It's kind of fun."

Albert Fok, president of the Chinatown Business Improvement Association, said the new businesses are helping fill some of the vacant storefronts that have become more prevalent in the past few years.

"It's a perfect match. I welcome such a change," said Mr. Fok. "Some people are worried about the watering down of Chinatown. But if it makes the community thrive again, so be it."

There's about a 10-per-cent vacancy rate in Chinatown right now, with a high number of shops empty on the block of Pender east of Flatspot. Some owners, like those at the long-standing Cathay Imports a couple of doors away from Flatspot, are simply retiring. A few are moving to the suburban Asian shopping centres. Others are just going out of business.

The Chinatown vacancy rate is not a problem of high prices, according to broker Jordan Eng. Chinatown lease rates, at $15-to-$30 a square foot, are the cheapest in town, about a tenth of the asking price on Robson.

But for the steadfast opponents of gentrification, the question isn't just whether Chinatown's identity will be affected, it's what the impact these businesses will have on the public space, rental apartments and businesses that the neighbourhood's poor people use.

"I would encourage these people setting up businesses to see their social role as gentrifiers," said Ivan Drury, an activist currently working with the Carnegie Community Action Project. He and his group have approached the new crop of store owners to tell them that. In one case, they protested outside the Columbia stores – two groups of young Vancouverites whom many would see as identical, but with differing values.

Mr. Drury said the city's current Chinatown plan, along with its incentives to restore shopfronts and encourage new businesses, are all aimed at bringing in the kind of young, first-time entrepreneurs who will make higher-income people feel comfortable coming into the area.

He'd like to see the city offer incentives to keep the old, working-class shops and restaurants open.

Andy Yan, an urban analyst working with Bing Thom Architects, says the conflicts are part of the changing economics of cities.

The kinds of businesses that used to cater to working- and middle-class Vancouverites in Chinatown have moved to the suburbs or disappeared, as city residents have either become much poorer or much richer.

The poor can't afford the old diners, while the well off often prefer to eat at Bao Bei instead of Vic's – the diner across from the old police headquarters, frequently featured in the TV series DaVinci'sInquest, that was turned into a Waves coffee shop a couple of years ago.

"It's reflective," said Mr. Yan, "of the larger transition of the whole city."

Scam artists preying on Chinese senior citizens have made off with $100,000, police say
November 9, 2012 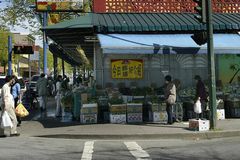 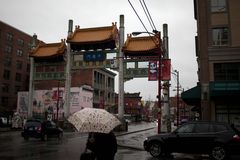