B.C.'s new energy minister, Bill Bennett, is bracing himself to be the guy who has to tell his cabinet that BC Hydro rates have to go up. That maybe the Premier's pet project, Site C, isn't worth it. And that government needs to wean itself off the Crown corporation's dividends.

Mr. Bennett is not one to shy away from speaking harsh truths, but in the coming months, he may have occasion to ask himself why on earth he asked for this portfolio.

Early this week, he'll be asking to meet the Hydro board for what promises to be a less-than-friendly chat. To start, he wants to know why he was blindsided, just days before the June 27 budget, with the news of hundreds of millions of dollars' worth of new capital projects and construction cost overruns.

He is vowing to get a grip on spending at the Crown corporation.

Many other cabinet ministers before him have tried, with little success. Rich Coleman had the energy file before him, and two years ago he made a great show of demanding spending cuts. Mr. Coleman was armed with a lengthy report that painted a clear picture of a "gold-standard" Crown corporation that favours excessive planning and over-engineering while enjoying unfettered increases in size and spending.

Today, Mr. Bennett says some progress has been made, but he's still unimpressed.

"I'm not going to try B.S. anybody about the problems that are there. There is no point in that and it's not going to help us move forward," he said in an interview.

Part of the reason the Crown corporation always ends up on top is that the B.C. government is addicted to the dividends that Hydro delivers to its shareholder.

"Governments – the NDP and us – have become too reliant on BC Hydro's annual dividend," he said. "That has created a situation where we have less leverage to force important changes to make this corporation operate like a commercial corporation – which is what my overall goal is."

BC Hydro has demonstrated poor management with its handling of the construction of the Northwest Transmission line, a project that was initially pegged at $400-million. The latest budget is almost $750-million, and it won't be finished until next spring.

"How is it that BC Hydro can't estimate its costs accurately?" an exasperated Mr. Bennett wondered aloud. "The problem with this project is that B.C. Hydro does not operate like a business."

He is quick to say he is not proposing to privatize Hydro, just that he wants it to behave as if it were a private-sector enterprise, with an eye on the bottom line. He said Hydro does need to borrow for capital investments, and he is not terribly disturbed by the $4.3-billion in deferral accounts that the corporation has built up. "Part of that is a mea culpa up front from me that our financial demands at BC Hydro are part of the story."

In the meantime, he's worried about the $8-billion Site C project which was promised by his B.C. Liberal Party throughout the election campaign as a key building block for developing a liquefied natural gas industry.

"I need to get some people looking at the Site C project immediately to make sure we're not facing a similar situation [with cost overruns] … I will be faced with having to make some very difficult recommendations to cabinet."

All of this leads to an inescapable conclusion, that the rate controls established with fanfare by the Premier under her "families first" agenda will have to go.

"There is tremendous upward pressure on rates," he said. The Crown hasn't been through a public rate review since 2009, and after years of government intervention, a reality check is long overdue.

Rate hikes will be an easier sell, presumably, if Mr. Bennett can show taxpayers that he has managed to untangle the mess at Hydro and imposed the same kinds of restraint that the rest of the public service has experienced. But it won't change the outcome.

"I think everybody in government recognizes that rates are going to have to go up." 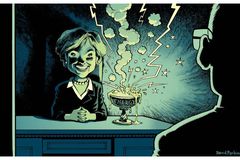