As a leading bird expert and a lifetime bird lover, Neil Dawe is the most unlikely advocate of a radical new idea that is calling for "the eradication" of virtually every Canada goose on the east coast of Vancouver Island.

"I don't like doing it. They are beautiful birds. But what I am saying is we messed up and it's urgent that we take action," said the retired Canadian Wildlife Service biologist, who thinks wiping out the Island's 15,000 resident geese can't happen soon enough.

"You can cull the population, but that takes time, or you can eradicate the population … rounding them up during the summer molt," he said. "Nobody likes talking about it, but it has to be addressed. They have exceeded the carrying capacity of the ecosystem."

But Laura-Leah Shaw, a Green Party candidate who has worked to save feral rabbits from extermination in Victoria, says a bird kill would only bring British Columbia unwanted bad publicity.

"When I heard about this I was horrified," Ms. Shaw said Tuesday. "We've made an imbalance of nature both with rabbits and with geese … but I don't think the solution is killing them."

Ms. Shaw said she accepts that geese are causing environmental damage, but the problem was years in the making and she argues rushing into a solution isn't justified. "You need to have patience," she said. "Quick solutions are usually lethal - and we end up looking like fools on the international stage. That won't be good for tourism."

She suggested a program of gradually reducing the goose population by removing eggs from nests in the spring. "If they lay four eggs, take three away," she said.

Mr. Dawe, who lives in Parksville, came to his startling conclusion after researching the impact of Canada geese on several estuaries on the East Coast of Vancouver Island, between Campbell River and Qualicum Beach.

He noticed the estuaries he'd first seen in the 1970s were radically changed by the 1990s and a few years ago set out to find out why. Working with Andy Stewart, a biologist in Victoria, and Ron Buechert, a Qualicum Beach biologist, the researchers have confirmed, in two papers that are not yet published, that Canada geese are the prime cause of widespread habitat degradation.

The geese were introduced to the island in the 1930s from a game farm near Victoria and, unlike Canada geese of wild origin, they do not migrate but reside year-round on Vancouver Island, feeding heavily on plants in estuaries.

Mr. Dawe said geese in the Little Qualicum River estuary each year browse off 15 metric tonnes of a type of sedge that is of primary importance to the ecosystem. "And that's just one plant, in one estuary," he said. "The damage they are doing is extensive."

The geese wipe out so many plants that areas that were once lush with marsh grasses are now mud flats. By digging out roots, the geese create erosion, and in some areas soils that took thousands of year to build up have been washed away, leaving only gravel.

The researchers found small channels in the estuaries have filled with silt, overhanging vegetation that cooled the water has vanished and crustaceans, insect populations, young salmon and other small fish populations have declined.

Mr. Dawe said he realizes his conclusions about killing geese will be controversial, but he doesn't see any other solution, "unless someone wants to round them up like they did with the rabbits [at the University of Victoria]"

When a proposal was made earlier this year to cull an out-of-control rabbit population on the UVic campus, it caused such a public outcry the university had to change its plans. Instead of a slaughter, about 700 rabbits were trapped alive and moved to sanctuaries; about 100 were killed and about 200 have been left in a designated area.

Mr. Dawe said the resident Canada goose population on Vancouver Island was relatively small until the 1970s, when the provincial government embarked on an enhancement plan to improve hunting opportunities. Working from a population of about 200 geese near Victoria, which became established after their release from a game farm, the province introduced geese all along the east coast of the Island. Over the next 40 years the population soared, even as hunting declined in popularity, with sales of migratory bird hunting permits in B.C. falling from nearly 35,000 in 1974 to about 5,000 by 2008.

Mr. Buechert, who examined the Englishman River estuary, said his findings of habitat damage mirror those of Mr. Dawe's on the Little Qualicum. "We are talking huge changes in the vegetation; massive areas; many hectares," he said.

Mr. Buechert said he'd like to see hunting encouraged, but it might not be possible in some estuaries, because of nearby housing.

And addling or removing eggs from nests will not reduce the goose population fast enough, he maintains.

"We need to take the issue seriously. It's not like we've got any time left on this," he said. " If we do nothing it's going to impact hundreds of species, as well as the geese. . . I want the geese out of these estuaries because the estuaries can't handle them. If that means a cull, yes, I would accept that, and cull is just another word for killing geese."

Which bird will best the beaver as national symbol?
May 19, 2010 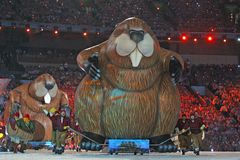 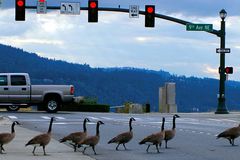