It sits like a time capsule, once a massive industrial operation, now frozen in a moment, taunting area residents as a constant reminder of better days.

In the cafeteria pantry, unopened cans of vegetables line the shelves. At the end of one of the production lines, bales of craft paper are bundled in stacks while the plant and its equipment quietly rusts. Tanks full of toxic chemicals form a precarious sentry ring around the buildings. The "hog fuel pile" – a 2.3-million cubic meter mound of wood chips once destined to be turned into pulp, stretches for more than an acre, saturated with the constant precipitation of one of the rainiest places in Canada.

The Skeena Cellulose pulp mill on Watson Island in Prince Rupert, once the economic lifeblood of the city, stopped production more than a decade ago, in 2001.

But the people here haven't been able to close the sad chapter in their history.

The mill exists in a state of suspended animation because of a protracted legal dispute with its former owner, a Chinese businessman named Ni Ritao.

And a bizarre scandal stretches from the Northern B.C. coast to the provincial legislature in Victoria and across the Pacific to the very top of China's energy ministry in Beijing.

In addition to Mr. Ni, the curse of the Skeena mill has, so far, ensnared a former provincial MLA, a current B.C. cabinet minister, and the head of China's National Energy Administration.

"It's been far from what anybody ever imagined," Prince Rupert mayor Jack Mussallem said in an interview. "To this day, it continues on, with the municipality spending hundreds of thousands of dollars on legal expenses. To this day, we still have security people there. In the winter, you need to keep the heat on."

The city of Prince Rupert has been spending as much as $100,000 per month maintaining the site and tens of thousands more in legal bills. Until litigation with Mr. Ni and his title claims are resolved, the city can't sell the land to a consortium of buyers offering $5.5-million. The buyers are willing to assume the environmental cleanup costs, estimated at $47-million to $200-million. The group, which includes two coal companies and a pair of local First Nations bands, wants to redevelop the island as a private port to serve as a staging ground for equipment used by coal companies in the area.

"The people of Prince Rupert have to understand that the mill is never coming back," said Tanner Elton, a Vancouver lawyer who is part of the consortium.

For more than half a century, the Skeena mill was the cornerstone of Prince Rupert's economy, providing jobs for 700 workers and paying about $3-million in annual taxes, the largest source of corporate revenue for the city.

To some residents, the Skeena mill, which opened in 1951, is now a cursed symbol of the promise that Prince Rupert has never achieved. The plant had to be rescued by the provincial NDP government during the 1970s. When the B.C. Liberals came to power in 2001, the bailouts stopped and the mill closed. The 13,000 people of this city, where unemployment is well above 10 per cent, want to move on.

That's being prevented by a deal struck in 2005, in which Mr. Ni, a Chinese businessman from Zhejiang province, bought the Skeena mill for about $9-million.

Many expected Mr. Ni to restart the mill and bring back lost jobs. But he never did, and the city took most of the property back from Mr. Ni and his company, Sun Wave Forest Products, in 2010 for unpaid taxes. Sun Wave has disputed the tax sale and sued the city.

Once a potential saviour, Mr. Ni is now seen as a villain to many.

"There are people of the opinion that Mr. Ni and Sun Wave Forest Products have been very irresponsible in how they've handled their ownership of that property," the mayor said.

In late December, a judge ruled that the city can proceed with the sale of Watson Island despite the litigation. However, Sun Wave is appealing the order and still controls a small tract of land on the island, an issue that must be resolved before a sale can proceed. The city may also have to pay damages to Sun Wave.

In addition to the legal dispute, the purchase of the mill has been linked to fraud allegations in China against Mr. Ni that also involve Liu Tienan, the director of China's National Energy Administration and deputy director of the National Development and Reform Commission (NDRC), one of China's most powerful ministries.

An editor of Caijing Magazine in China recently published accusations against Mr. Liu on the internet. He alleged that family members of Mr. Liu's were shareholders in one of Mr. Ni's holding companies that was used in the purchase of the Skeena mill. The Caijing editor also alleged Mr. Liu forged his résumé and threatened to kill his mistress.

The Globe and Mail has obtained and viewed documents that appear to verify some of these claims.

Officials in China's energy administration denied the Caijing editor's allegations as "pure rumours." However, the fact that the story was not censored or removed from Chinese websites and has been picked up by state-linked media outlets suggests the Chinese government is giving the allegations credence.

Caijing published a report last year claiming Mr. Ni attempted to use the mill to secure more than $100-million (U.S.) in loans from state-controlled banks in China. The Caijing report said that in June, 2006, after Mr. Ni had already bought the mill, he applied for the loans, $60-million of which was earmarked for buying a majority stake in Sun Wave, a company he already controlled. Mr. Ni allegedly used forged appraisal documents in the loan application valuing the mill at $202-million. The appraisal firm named in the documents, American Appraisal Canada Inc., when contacted by The Globe and Mail, denied ever issuing the report.

Mr. Ni's representatives in Canada have said the allegations are untrue and that the loans, which were never approved, were for the cost of restarting the mill. Wei Shao, a lawyer in Vancouver representing Mr. Ni in several lawsuits, said the Caijing story was planted by disgruntled former Sun Wave employees in Canada.

The Skeena saga has also enmeshed a British Columbia cabinet minister. Documents obtained by The Globe and Mail show that B.C. jobs minister Pat Bell forwarded an internal government email discussing a potential settlement with Mr. Ni and detailing the fraud allegations against him to an employee of the Chinese businessman who is also a B.C. Liberal Party insider and a former MLA.

The explosive Caijing report was discussed at length by B.C. government employees, including Mr. Bell, the jobs minister, in an e-mail chain. Kevin Tsui, a B.C. government worker in Beijing, sent the article and a summary of the allegations against Mr. Ni to staff in B.C. in late November, 2011. "I understand there will be a cross-ministry meeting this week regarding Mr. Ni, Sunwave and developing a settlement framework. Below provides some additional context...," Mr. Tsui wrote, before describing what he called "fraudulent activities," including "inappropriate influence of a former NDRC official," a "dubious loan scheme," a "fraudulent financial document" and "missing approvals of Chinese regulators."

The internal ministry correspondence was released under a provincial freedom of information request. Parts of the e-mail chain obtained by The Globe were redacted to comply with government policy to withhold any information containing "policy advice, recommendations or draft regulations" and "disclosure harmful to personal privacy."

The documents show, however, that Mr. Bell, the cabinet minister, forwarded the entire un-redacted e-mail chain to a man named Bill Belsey. Mr. Belsey is a former B.C. MLA for the Prince Rupert area who is an employee of Sun Wave and has served as a representative of Mr. Ni in Canada. In 2005, a company controlled by Mr. Ni donated $10,000 to Mr. Belsey's election campaign. Mr. Belsey is also currently the vice-president of the B.C. Liberal Party.

In an interview, Mr. Belsey appeared to suggest he did not know about the government meeting regarding Mr. Ni before he received the email from Mr. Bell. "I don't know what they do. I don't know what they were doing," he said. When asked to clarify whether he knew of the meeting, he said, "How would I know that? ... Before I got an email I would know about a meeting? You have to be kidding me."

The opposition NDP is calling on the Premier to investigate.

As another rainy winter descends on Prince Rupert, the shuttered mill and Watson Island are still in limbo. The hulking buildings remind former workers of what once was and what might have been.

"That was our bread and butter," said Ely Abecia, who worked at the mill for two decades and now runs a driving school. 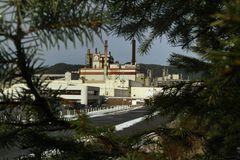 Chinese firm eyes Skeena pulp plant
China Paper gets nod to buy Skeena mill
Follow Andy Hoffman on Twitter @iamandyhoffman
Report an error Editorial code of conduct
Due to technical reasons, we have temporarily removed commenting from our articles. We hope to have this fixed soon. Thank you for your patience. If you are looking to give feedback on our new site, please send it along to feedback@globeandmail.com. If you want to write a letter to the editor, please forward to letters@globeandmail.com.
Comments