When Martin Haulena first saw the sea otter that had taken a shotgun blast to the head, the animal had multiple injuries and was barely clinging to life.

"Walter was in terrible body condition," said Dr. Haulena, the veterinarian who leads the marine mammal rescue team at the Vancouver Aquarium. "He was blind. He had a very serious flipper injury. Basically, this was an animal in dire straits."

But Walter, whose shooting underscores a delicate balancing act on the West Coast where reintroduced sea otters are competing with humans for shellfish, is in safer waters now.

The Vancouver Aquarium announced Tuesday that the sea otter, which someone tried to kill last fall near Tofino, on the west coast of Vancouver Island, has largely recovered from his injuries. Because he is permanently blind, however, Walter will remain in the care of the Vancouver Aquarium, rather than being released.

For now, said Dr. Haulena, the otter is being kept in isolation because it's not clear how well he will interact with other otters.

"He does need food to be brought very close to him," said Dr. Haulena. "Basically, he gets all of his food dropped on his chest, piece by piece."

But he said Walter is adapting to his new world and the day may come when he can swim with Katmai, Tanu and Elfin, three other rescued sea otters under the care of the Vancouver Aquarium.

Anne Salomon, at Simon Fraser University's school of environmental management, said there are increasing conflicts with sea otters because the animals – seen by some as adorably photogenic and by others as troublesome predators – are expanding their range.

"People who didn't grow up with them can feel in direct competition when they show up and start to feed on shellfish," Dr. Salomon said. "These tensions are very real … up in Alaska, through B.C. and all the way to California."

Sea otters once thrived on the B.C. coast, but the fur trade led to overhunting and they had vanished by 1920. In 1969, 70 otters were reintroduced from Alaska and, since then, the population has grown to an estimated 4,700.

Paul Cottrell, Pacific marine mammal co-ordinator for the federal Department of Fisheries and Oceans, said sea otters are thriving in some areas, particularly north of Tofino, and that has led to some conflict, because the animals prey on geoduck clams, sea urchins and other shellfish highly valued by humans.

"We've heard there are issues … there is concern there may be competition [between humans and otters] in some areas," said Mr. Cottrell. "Unfortunately, we get a few shot sea otters every year."

He didn't speculate on the motivation for the shooting of Walter.

"It's hard to know. It's just a tragedy," he said of the incident.

The fisheries officer in Tofino, Denise Koshowski, was sent to investigate. She located the animal and kept it under observation until a marine mammal rescue team from the Vancouver Aquarium arrived.

"She followed it along the shore … It was evident this guy was not right," said Mr. Cottrell. "It's amazing what the aquarium did [in helping the animal recover]."

Don Hall, fisheries program manager for the Nuu-chah-nulth First Nation, said the reintroduction of sea otters has been changing the West Coast ecosystem, and not to everyone's liking.

"This is a complicated issue," he said. "They definitely are posing a problem for harvesters of shellfish and they have definitely changed the feeding habits of the Nuu-chah-nulth. … If you like eating crabs and clams and urchins – well, they are not present any more in the areas where sea otters have been reintroduced."

Mr. Hall said the Nuu-chah-nulth, whose traditional robes are made from sea-otter pelts, welcome the return of the animals because " in the long run they'll help build a much healthier ecosystem."

But he said the benefits are not quickly obvious and in the meantime some may view sea otters as unwanted competition.

Shot off Tofino, Walter the blind sea otter is on the mend
December 4, 2013 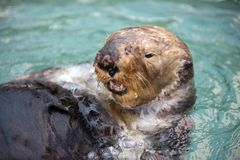 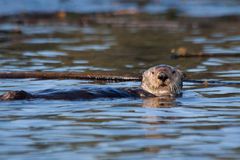 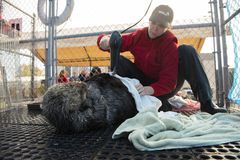