The often controversial man who has been Premier Christy Clark's chief fundraiser and biggest fan since she started her campaign for leadership of the B.C. Liberal party in 2010 is stepping back from the first role as of this month.

Bob Rennie, founder of B.C.'s most high-profile condo-marketing empire, said he told the party in November that he had done what he promised to do – get the party out of debt and put it on a solid footing – and that, starting this month, he wants to get on with other parts of his life.

"I'm 60. I'm doing the things where I feel I'm needed. I have a whole bunch of other things on the planet I want to do," said Mr. Rennie, who is a noted art collector and who sits on the boards of the Tate Gallery in London and the Art Institute of Chicago.

He had started telling people around him as early as last February that he planned to quit as head fundraiser after the May, 2017 election. He said he's moved that timeline ahead because he's not needed.

Mr. Rennie said his understanding is that the party's ridings now have about around $4- to $6-million available for the campaign that is unofficially under way already for the May provincial election. As well, the party has $2-million in the bank.

Figures released by the party Friday showed it has raised $32-million since the election in 2013, including $12.5-million just in 2016.

"I am really proud of the job I did," said Mr. Rennie.

The party hasn't yet named another head of fundraising, although there has been some discussion of another person whose business has a strong component of real-estate interests.

But, Mr. Rennie says, he is still an unwavering supporter of Ms. Clark's and he is ready to help if needed.

"I am one phone call away. I told the premier, 'If you need help in February or March, you call me.'"

He said he still firmly believes she is the province's best ambassador.

"She represents the province and the brand of B.C. really well in a very complicated planet."

Mr. Rennie was one of the first people to back Ms. Clark during her leadership bid, even when she couldn't get endorsements from Liberal MLAs.

Mr. Rennie has frequently attracted criticism, in part because he one of the most outspoken members of the real-estate industry, which has been the subject of intense public criticism the last five years as housing costs have skyrocketed.

He has also been the lightning rod for accusations that the Liberals are in the pocket of developers. People in the development industry contributed $10.7-million to the Liberal Party between 2005 and 2015, out of a total of $107.8-million, according to the government watchdog organization Integrity B.C.

Before Mr. Rennie's arrival, the B.C. Liberals had typically seen its fundraising led by people from the investment industry, like Marty Zlotnik and Rusty Goepel.

Ms. Clark's government was perceived as dragging its heels on taking any action to cool down the housing market, which is widely seen as spinning out of control because of foreign investment.

Mr. Rennie had always been vocal about insisting foreign investment wasn't the main driver of the market. He had lobbied for a speculation tax, rather than the foreign-buyers tax that Ms. Clark eventually introduced in July last year in response to the public pressure.

Mr. Rennie came under fire shortly after that move when he said he knew in advance that Ms. Clark was going to introduce the tax, although he later said that that was an educated guess and not because of any inside information. He offered to resign at the time if necessary.

He said his current move away from the fundraising role has nothing to do with that incident or with the party's desire to distance itself from the real-estate industry.

Mr. Rennie has stepped back from other ventures, as well. He has been passing more responsibility in the last two years for his company, Rennie Marketing Systems, to his son, Kris.

Mr. Rennie has also been a prominent supporter of and fundraiser for Vancouver's ruling civic party, Vision Vancouver, and Mayor Gregor Robertson.

Asked if he was also bowing out of his role with Vision, he responded: "I will tell you that in the next few months. I'm watching them."

Mr. Rennie first got publicly involved in politics in 2005, when he supported Sam Sullivan as the mayoral candidate for Vancouver's civic centre-right party, the Non-Partisan Association, over Ms. Clark. 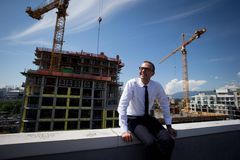 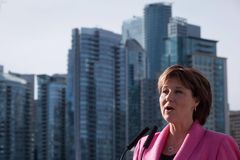