BC Place Stadium was awash with glitter, gold, and colourful saris as Vancouver rolled out its red carpet for some of the biggest names in Indian cinema.

The who's who of Bollywood gathered for the inaugural Times of India Film Awards gala, the culmination of a three-day celebration of South Asian film, dance and music.

The weekend, however, was meant to serve a greater purpose than simply recognizing film stars and technical crews for their achievements, according to one Bollywood director.

"Our films are really about the audience base," Karan Johar told a news conference when it was first announced that Vancouver would host the movie awards. "When everybody calls them the diaspora audience ... I always say, 'They're much more Indian at heart than any of us are. They feel so much more attached to their roots."

The multimillion-dollar, taxpayer-funded awards weekend was money well spent for Richmond resident Jasbir Johal, who attended the awards gala with her family.

Ms. Johal was born in India and came to Canada in 1988. She grew up watching Bollywood with her mother in India and although she never got a chance to see some of the industry's biggest stars there, she said she was excited to share the glamour of Bollywood in Canada with her kids.

She said Saturday night's event goes beyond film awards and celebrity gossip because Bollywood has helped her Canadian-born daughters maintain a strong interest in their heritage.

"I'm so blessed," Ms. Johal said. "My children were born here ... [but] they still love to get involved in Indian culture. I think it's all because of media and TV shows and shows like this."

Braving the rain to snap photos, many fans offered opinions on who would win which awards.

While the show started on the infamous "Indian time" – more than 45 minutes late – the 40,000 attendees responded with high-pitched screams, whistles and applause as about 40 Bhangra dancers from Surrey, B.C., opened the night with a high-energy routine.

There were audible boos, however, when Premier Christy Clark first took the stage – though the crowd did warm up some as she spoke of future opportunities for Bollywood films in the province.

"Let's use this beautiful celebration of Indian film to continue to build bridges between us," Ms. Clark said. "More trade opportunities, more tourism, and definitely more of your movies right here in beautiful British Columbia."

Finance Minister Mike de Jong got some laughs from the crowd when he tried speaking Hindi and also for his attempt at performing a South Asian dance.

He joked that he was auditioning for a role in Bollywood because he never knew when he "might be in need of a job."

Awards were handed out in 14 main categories based on online votes from Hindi-film fans around the world. A number of critics' choice selections were also awarded to those who didn't win in the popular choice categories.

Host Ranbir Kapoor, who was introduced as "the heartthrob of millions, his awesomeness," took the stage with co-host Anushka Sharma in a glittery act.

None, however, could eclipse the star power of Shah Rukh Khan, who had the audience bursting into frenzied applause every time his image flashed on the jumbotron.

He gave a sweat-soaked performance that had the audience on their feet as the clock struck midnight, but still ended up losing out in the Best Actor category to Mr. Kapoor.

Barfi, a film about a deaf and mute man caught in a love triangle, won Best Picture, while the film's director, Anurag Basu, was also victorious in his category.

Priyanka Chopra won best actress for her work on the same film.

Perhaps the most quirky award – reserved for villains – went to the host's father, Rishi Kapoor. He won best actor in a negative role for the Indian action drama, Agneepath. 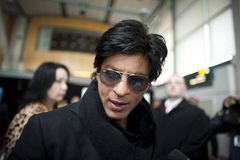 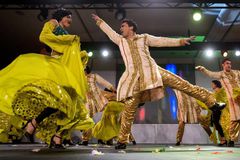 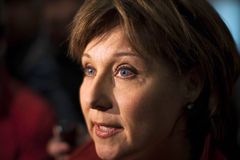