A 14-year-old boy has become the seventh person charged in a brutal sexual attack on a young man in Prince George, B.C., last week.

The boy is accused of aggravated sexual assault, aggravated assault and unlawful confinement in the attack on Jan. 7, in which a teenaged victim was beaten and sexually assaulted before being found in a snowbank.

A second boy was also assaulted in the incident.

Four other juveniles ranging in age from 15 to 17 are facing similar charges, along with two adults – 18-year-old Hayden Alwood and 20-year-old Mercedes Jewett.

The charges were laid after what police called a "disturbing" attack in which the victims were targeted and lured to an apartment building where the assaults took place.

Police have not revealed a motive for the attacks.

RCMP Corporal Craig Douglass said last week that there is no evidence the incidents were gang-related. He added that police believe they have a motive but won't speak about it publicly.

A police request for public help was successful, he said.

"Investigators have received several tips since our first media release," Cpl. Douglass said in a news release. "This investigation remains a priority for the Prince George RCMP and every tip will be followed up." 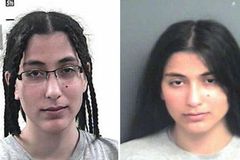