Homeless deaths have reached a record level in British Columbia and advocates are attributing it to prohibitive housing costs, the unresolved overdose crisis and a patchwork availability of harm-reduction services.

At least 70 homeless people died in B.C. in 2015, the latest year for which data are available, according to a new report by Megaphone, a non-profit group that advocates for homeless and low-income people. That is the highest number on record going back to 2006 and compares with 45 homeless deaths in 2014 and 27 in 2013.

Jessica Hannon, Megaphone's executive director and the lead author of the report, said it was depressing to prepare the report knowing that these deaths were increasing.

"This is the third year we've put together this report and we've been sounding the alarm that it's on the rise," she said. "We haven't seen the necessary changes to prevent homeless deaths. We need to treat this with the urgency of a crisis."

The figures come from the BC Coroners Service and are likely underestimates. The service includes deaths of those who were considered "street homeless" and "sheltered homeless," for example, but not those who were staying in temporary accommodations such as a hotel, a correctional institution or a residential treatment facility with no permanent home to return to.

Deaths that must be reported to the coroner include all non-natural deaths and sudden and unexpected deaths of those not under the care of a physician; homeless deaths that did not meet this criteria were not included.

The number one cause of homeless deaths in 2015 was poisoning by alcohol or drugs, at 34, up from 13 in 2014. Those deaths came a few years into the grim milieu of a provincial overdose crisis that continues to worsen, claiming 931 people in all last year.

The number two cause of homeless deaths in 2015 was natural disease.

The median age of death for a homeless person was between 40 and 49, compared with 76.4 in the general population.

For the second consecutive year, the highest number of homeless deaths in 2015 occurred in the Fraser region: 30 people, or 42.8 per cent of the total.

"Advocates point to a lack of affordable housing, as well as limited provision of harm reduction and shelter services in asserting that people experiencing homelessness in the Fraser region experience marginalization that makes them increasingly vulnerable," the report states.

Jesse Wegemast, a pastor with the 5 and 2 Ministries, an Abbotsford street church, said the Fraser Valley city has seen an "exponential rise" in homelessness – and especially hidden homelessness.

"If you were to go to the Wal-Mart parking lot in Abbotsford at 2 a.m., you would see about 20 vehicles there and every single one would have one or two people sleeping inside," he said.

DJ Larkin, a lawyer with the Pivot Legal Society, noted the patchwork availability of social services outside of Vancouver.

"What we know is that the Fraser region does not have the same services as are available in Vancouver Coastal," she said. "That includes things like different housing options, shelter options and harm reduction services like safe consumption sites."

Until 2014, Abbotsford had a nearly decade-old bylaw that explicitly prohibited harm-reduction services.

The report cites as an example a proposed homeless shelter for Maple Ridge that the B.C. government scrapped last year in response to public backlash. Another purpose-built shelter was also shelved and a temporary shelter is about to close.

"Most municipalities in Fraser region still have bylaws prohibiting people from camping overnight," Ms. Larkin said, "and so people end up hiding from bylaw enforcement, hiding from members of the community who may do them harm. That puts them at risk of dying."

Megaphone sent the report to B.C.'s top three party leaders with a call for a death-review panel to examine the circumstances of homeless deaths to reduce the likelihood of similar deaths in the future.

B.C. continues to struggle with opioid crisis a year into public-health emergency
April 13, 2017 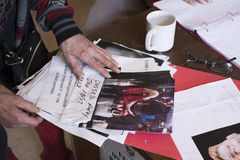 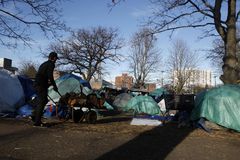