Fred Latremouille's voice, as smooth as cream liqueur, provided a background soundtrack for British Columbia's baby boomers, who aged along with the popular broadcaster.

He first hit the airwaves in Vancouver at the age of 17 in 1962, building a following on Top 40 radio stations as a disc jockey spinning the latest rock and pop singles. By his 30s, he had transformed from swinging teenaged heartthrob to wisecracking television weatherman. His final public act was as an amiable and affable morning radio host alongside Cathy Baldazzi, a traffic reporter who would become his wife, on a laid-back show called Latremornings.

The death of Mr. Latremouille from liver disease at 69 shocked many of his fans, as his boyish visage and youthful vigour gave him an ageless presence.

A familiar voice on the airwaves for decades, Mr. Latremouille had the ability to connect with his audience, making him a much in-demand pitchman for radio and television commercials, where he displayed a deft comic touch.

Like many of his peers, Mr. Latremouille came to radio broadcasting as something of a loner, a boy who moved often and heard on the airwaves the exciting sounds of Elvis Presley and early rock 'n' roll, finding in it an unseen community that shared his interests.

Frederick Bruce Latremouille was born on Oct. 22, 1945, in Nanaimo, B.C., to Margaret and Bruce Latremouille. His father, a wartime pilot and officer, trained other Royal Canadian Air Force flyers on Tiger Moths. The couple divorced when Fred was two. His mother later married Robert Harlow, the regional director of CBC Radio, and the boy grew up in a duplex in West Vancouver. Bill Good, a popular sportscaster, lived on the same block. His namesake son and young Fred bicycled around the neighbourhood and maintained a friendship that would see both become legends in Vancouver broadcasting.

Young Fred earned spending money as a teenage caddy at Gleneagles Golf Course, gaining a love for the sport. At 16, he spotted a newspaper advertisement seeking an announcer for radio station CKYL in Peace River, Alta. With a song about tumbleweeds playing in the background, the teenager recorded an audition tape in the family basement that he mailed to the station. He lied about his age, telling them he was 20. His ruse was discovered when he arrived at the radio station, but, having already invested the price of an airplane ticket, the station retained the precocious youth, who dropped out of Grade 11 to read the news and host a morning show.

The gig lasted about a year before he returned to Vancouver, enrolled again in high school, and began hanging out in the waiting room of radio station CJOR trying to cajole the staff to listen to his tape. He pestered station manager Vic Waters for months before being hired to handle an afternoon show featuring country-and-western music. The young jock slipped onto the playlist pop tunes of interest to his peers. He claimed to have been the first in the city to play a record by the Beatles, and was a keen promoter of the Motown sound.

In 1964, he was lured away to a popular hit-parade station whose boss jocks were known as the CFUN Good Guys, billed as "tops on the teen scene," and whose weekly charts were called the CFUNtastic Fifty. He even took a pay cut to be able to work at a station more dedicated to pop music.

The following year, Mr. Latremouille played drums with the station's house band, the CFUN Classics, on a rollicking instrumental song titled Latromotion. It first appeared on the CFUNtastic Fifty at No. 45 on Feb. 13, 1965. The tune spent seven weeks on the station's charts, rising as high as No. 13. (The Classics formed the nucleus of the band Chilliwack.)

In an age of frenetic delivery and motormouth patter, his cool insouciance stood out, and he was tabbed to be host of television shows airing on the CBC in the 1960s, including Let's Go, Where It's At and New Sounds. A restless figure confident in his abilities, he flitted from job to job, knowing he was in demand. He worked briefly at CFAX in Victoria before returning to Vancouver for two years at CKLG, a Top 40 rival to CFUN. At CKLG, he joined with fellow jockey Roy Hennessey under the name Froyed to record a parody of the Rolling Stones' Ruby Tuesday renamed Grubby Thursday. The parody lyrics joked about unclean hippies and rhymed DDT with LSD.

Around this time, the radio host grew his blond hair into a mod, mop-top bowl with long sideburns, while also wearing a velvet-trimmed Edwardian morning coat, or a red serge military tunic in the Sgt. Pepper style. Mr. Latremouille performed alongside Paul Revere and the Raiders and chugged Southern Comfort with Janis Joplin. At public events, he would be mobbed like a rock star.

Mr. Latremouille became a co-editor of the Georgia Straight newspaper in 1967 seven issues after its debut, a time when the underground paper faced harassment from the police and threats from Vancouver's mayor. "Sometimes we had to step over the dopers on the floor to get work done," he once said, "and the Marxists were always coming in to tell us we were too soft." He personally sold the paper on street corners at 10 cents per copy and conducted a telephone interview with John Lennon during his honeymoon bed-in for peace with Yoko Ono in Amsterdam in March, 1969.

A diagnosis of testicular cancer in 1972 seemed to barely slow his pace, though the radiation treatment would damage his bones such that he would be unable to golf in his later middle age. He was host of Hourglass, a dinnertime news program airing on CBC-TV in Vancouver, and later showed up on the dial on a lunchtime program titled Fred and Friends, which was taped at locations around the city. By the early 1980s, he was the weatherman on BCTV's News Hour, a ratings juggernaut in the market. He also appeared in bit parts in Hollywood movies filming in Vancouver.

In 1984, he returned to CFUN, where he handled morning-show duties alongside a bright, young broadcaster named Cathy Baldazzi, who reported on traffic and weather. They married – his third time, her first – in 1987. A move from CFUN to rival KISS-FM in 1992 shook up local radio lineups, as rivals scrambled to counter the city's top-rated morning man. The couple got Prime Minister Kim Campbell to join them one morning, as she selected music and introduced the traffic report. The pair retired in November, 1999, with Mr. Latremouille saying it was time, as he told one newspaper, to "bury the alarm clock, sleep in and hit some golf balls." The couple returned to the airwaves six years later on Clear FM, broadcasting from their suburban seaside home in which a studio had been built. After a year, they retired for good, building a summer home on 25 acres on Prince Edward Island.

While holidaying in Hawaii in 2003, the couple invited B.C. Premier Gordon Campbell for dinner. The premier helped himself to "two or three martinis" before having wine with dinner, Mr. Latremouille said afterward. The premier was later pulled over for speeding and arrested for drunk driving. A breath sample registered a blood-alcohol concentration of 0.149, well over the legal limit of 0.08. Mr. Campbell later pleaded no contest and paid a fine. Mr. Latremouille wondered aloud whether he should have "tackled" his friend before letting him leave.

Like many broadcasters, Mr. Latremouille dedicated much time to charity fundraising and was known for promoting with his wife the annual Christmas Wish Breakfast, a yuletide tradition in which people bring toys for distribution to needy children.

Mr. Latremouille was inducted into the B.C. Entertainment Hall of Fame in 2006 and was named to the Canadian Association of Broadcasters' Hall of Fame the following year.

Mr. Latremouille died on March 5 in Scottsdale, Ariz., where he maintained a winter home. He leaves his wife of 27 years as well as sisters, brothers, his stepfather and his mother.

The broadcaster was a noted prankster, responsible for mayhem during live shows. (He once set Bill Good Jr.'s script afire as he read from it.) He incorporated fake wake-up phone calls in his shows, including once calling a woman at a snore clinic to tell her she'd be representing Canada at an international snore-off.

The radio host was in the audience for a taping of The Tonight Show while on holiday in Hollywood in 1988 when he was approached by a man who said he was looking for a Canadian disc jockey. The man told Mr. Latremouille that host Johnny Carson had taken ill, as had guest host Jay Leno. "I started to get nervous," Mr. Latremouille later confessed. "And then I really got nervous when the guy asked me if I was funny." He then was handed a piece of paper letting him know he'd been pranked by friends back home. 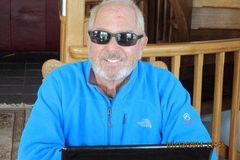