A founding member of the Canadian rock band Bachman-Turner Overdrive faces new sexual assault allegations just a year after he was acquitted of similar charges.

A publication ban has been placed on any information that could identify the victim, but MacDonald said police who work in the Fraser Valley community east of Vancouver began the investigation after a person came forward with a complaint.

He said the charges don't relate to the same woman who accused Bachman of sex assault when she was a preteen foster child in his home.

"The alleged incidents took place in the 1990s, so there was a fair amount of work that had to be done by our major crime unit detectives," said MacDonald.

MacDonald said Crown counsel swore the charges Monday, and Bachman turned himself in to police Tuesday afternoon, before appearing in court.

He said Bachman was released but placed on conditions that he not have any contact with a person under 16 years old and he stay away from areas where children might congregate.

Last May, a B.C. Supreme Court judge found Bachman not guilty, concluding that the young woman was not deliberately dishonest but her testimony was unreliable and inconsistent.

The judge ruled the Crown's evidence fell short of what was needed to convict and he was left with a reasonable doubt.

Bachman has been a Fraser Valley real estate agent for many years.

The Winnipeg-based BTO released its first album in May 1973. The band's second album, Bachman-Turner Overdrive II, released in December 1973, became a huge hit in the U.S. and Canada, with hit singles Let it Ride and Takin' Care of Business. In 1974, Tim Bachman left BTO, which eventually sold almost 30-million records worldwide. He has rejoined BTO for tours over the years.

Rocker Tim Bachman of BTO found not guilty on sex charges
May 1, 2013 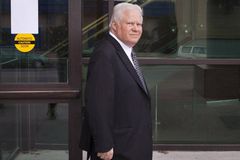