Dennis Palubeski has been sleeping under the same tree in the Mayor's Grove area of Beacon Hill Park for the past three weeks.

His hips hurt from the hard ground, and the angry rants of the man who sleeps in the bushes nearby keep him awake. But Palubeski, a homeless man from Kitchener-Waterloo, Ont., says he'd rather be outside than crowded into a shelter.

"Victoria is Mecca," says Palubeski as he folds his sleeping bag and blue tarp. "If you are going to be homeless, this is it. They've got the resources. You can't go hungry here. I just got two teeth extracted. They were really getting bad."

A city bylaw permits people to sleep in parks at night, but they must leave by 7 a.m. The bylaw dates back to a 2008 B.C. Supreme Court decision that said it was unconstitutional for Victoria to restrict overnight sleeping in parks if homeless shelter beds are full.

It's not unusual now to see tents pitched at night outside the Victoria Law Courts, along the scenic ocean front or at Beacon Hill Park, where Mayor's Grove includes a hawthorn tree planted in 1929 by Sir Winston Churchill.

Victoria is known for its mild climate, tame winters, lush greenery and laid-back lifestyle, but city officials and police say camping in the parks is a last resort for the homeless only and not a no-frills adventure for visitors.

"That's a problem," says Mayor Lisa Helps. "The bylaw clearly says if you are homeless, you can camp. You can't camp here if you are a tourist."

It's estimated there are more than 1,000 homeless people in Victoria, and police say about 100 of them are sleeping in parks.

An early-morning hike through Mayor's Grove finds about 10 people bedded down in the long grasses, beside trees and in forested clearings.

Eve and Dave, who are from the Vancouver area, say they've been sleeping in a rocky cavern with their two dogs for three nights.

Richard Campeau, 57, says he and his friend pitch a tent in the park every night, and Palubeski says he covers himself in a tarp and rests against a tree.

Campeau says he sleeps outside because he can't afford to pay rent. He says he doesn't like shelters because many of the people there are drug addicts.

"The town here puts the sick with drug addicts and after that you are labelled a drug addict. I'm homeless because I'm sick and you don't give us enough money."

Another man sleeps in the grass, covered in an orange tarp with a guitar by his side. He doesn't want to be interviewed.

"(Camping) was language that was used a year ago and it ended up getting on social media ... that there was free camping available in Victoria," says Insp. Scott McGregor of the Victoria Police Department.

He says six to 10 officers and bylaw officials make daily wake-up calls for people sleeping in parks, alleys and doorways, at a cost to the city of about $600,000 a year.

"It's really an issue of housing," says McGregor, a 25-year veteran of the force. "There's just a serious lack of housing in the city. ... I personally feel it's a tremendous drain on our resources that could be used for better things."

City council recently embarked on a homelessness initiative that could see an end to open season at all parks. Instead, only designated parks will be shelter zones.

The city is also considering building a designated homeless community, complete with so-called micro homes that are about the size of garden sheds.

"We can't just sit here and spend $600,000 a year on policing and parks cleanup," says Helps. "We're taking bold action, and of course it's going to make ripples."

"I drink too much," he says, pointing to crushed beer cans near his camp. "I do have a drinking problem. I would prefer to drink than to work, so there it is in a nutshell."

Palubeski slings his bag over his shoulder and starts to walk along a trail.

"To be quite honest, I would love to be idly rich," he says. "Now that I'm sleeping on the ground, I think to myself, `I made a wrong turn. I should have been a corporate lawyer.'" 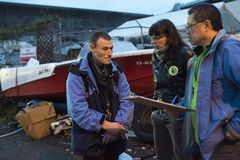 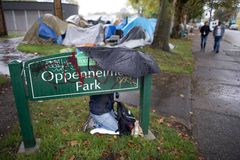 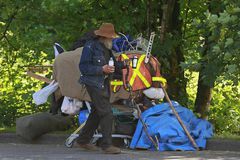