A sea creature at risk of going extinct in Asia is proving to be a survivor, but after an arduous ocean journey it's not welcome to find safe haven in British Columbia.

A non-indigenous mussel that likely hitchhiked its way across the Pacific ocean has been discovered on suspected tsunami debris from Japan's 2011 earthquake.

The federal Fisheries Department has identified the species as a mussel called Mytilus coruscus, and said it "has not conducted a full risk assessment." It said the creature arrived on a single piece of debris and is believed to have originated in Japan, but would not provide further details.

So far, the mussel appears to be the only "hitchhiker" verified as making an international arrival following the East Asia catastrophe that created a massive surge of water, casting about five million tonnes of debris into the sea.

Scientists predicted some of the wreckage would eventually turn up on B.C. shores, although provincial environment officials now say the volume has been lower than anticipated.

About 70 per cent of the debris sank off the Japanese coast, leaving 1.5 million tonnes to be dispersed by ocean currents, sink elsewhere or be swirled into giant garbage gyres.

"We believe that the greatest risk for major debris has passed," said an e-mail from the Environment Ministry.

But officials did single out the mussel survivor, which marine life experts say is a situation that should be taken seriously.

The species likely turned up on floating driftwood or some other surface it could cling to. But that also signals a possibility it could have entered Canadian waters, said Paul Valentich-Scott, a mollusk specialist in California.

Precautions should always be taken when a new creature surfaces in an unfamiliar environment, he said.

"Think of weeds in your yard. If they're let go, they'll take over everything," said Valentich-Scott with the Santa Barbara Museum of Natural History. "That's exactly what happens with introduced invasive species. It takes over all the available space and pushes everything out."

However, he believes that would be the worst case scenario and doesn't expect such trouble likely with this particular species.

A survey of several prominent B.C. aquatic centres turned up no experts familiar with the mussel.

But a 2012 study in the International Journal of Molecular Sciences, forwarded by the Vancouver Aquarium, sheds some light. It describes Mytilus coruscus as the "most favoured commercially" among about 20 mussel species in Korea, inhabiting the coastal areas of Eastern Asia including Korea, Japan and China.

"During the past few decades, this species has become endangered due to the loss of habitats and overfishing," the paper says.

The Fisheries Department said the federal government has an action plan to address the threat of aquatic invasive species, but did not specify how it applies.

A joint committee set up manage tsunami debris issues was the first to identify the stowaway mussel as a potential concern.

In draft minutes released to The Canadian Press under access to information laws, a bullet point suggests the debris with "isolated potential invasive species" surfaced in Ucluelet, on Vancouver Island's West coast.

William Austin, director of the Khoyatan Marine Laboratory on Vancouver Island, said it's not uncommon for non-native species to show up in coastal waters.

He said it may be a good idea to conduct surveys along the coast to track whether the mussel has latched onto any other new homes.

"Just recording all this stuff doesn't get you very far, necessarily," he said. "My own feeling is this is one of the things you want people in government to be able to be involved in." 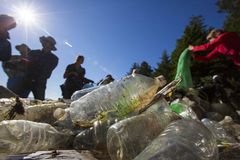 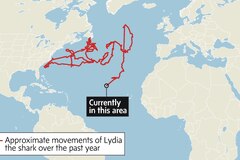