The ride-sharing and car-hire operation Uber says it wants to re-establish itself in Vancouver, two years after the B.C. transportation regulator exiled it from the region.

A spokesperson said Sunday that the company is working through the details to resume the service that uses a smartphone application to link passengers to drivers for hire, and they want to be back in B.C.

"We were sad to leave. We have always looked to come back," Arielle Goren said in an interview from the San Francisco area – home base for the five-year-old, multibillion-dollar enterprise that operates in 210 cities around the world and has faced ferocious opposition, including protests from taxi companies who see it as a threat.

"We've made no secret we are working hard to come back to Vancouver."

Through its app, Uber links the public and various ride options, including taxis, limousine services and members of the public who have been vetted through background checks to offer rides for payment.

But it was ousted from Vancouver in 2012 when the provincial Passenger Transportation Board requested the company seek a limousine licence, requiring customers to spend a minimum $75 for each trip. Uber objected, and withdrew from B.C.

Elsewhere in Canada, Uber is now operating in Halifax, Montreal and Toronto.

Ms. Goren said there was no timeline for the return – though a company representative met with Councillor Geoff Meggs two weeks ago to declare its renewed interest in operating in Vancouver.

"We're happy to work with people to craft regulation that makes sense for what it is that we do and what our business model is, which is a platform that connects riders to drivers," she said. "We hope we can work with local stakeholders, with city council, with the mayor, with whoever the relevant entities are in a particular city to understand we are not taxis, we have something to offer to both riders and drivers, that we seek to become part of the fabric of every community that we enter and we have something really valuable to offer."

Ms. Goren declined to get into specifics about what Uber will aim to do differently this time around. She said Vancouver has a dysfunctional taxi system that puts its interests ahead of the convenience of its customers.

"We believe there is space for us to come in and serve drivers and serve riders," Ms. Goren said.

Mohan Kang, president of the B.C. Taxi Association, was skeptical about Uber's place in the province on a second attempt, suggesting that the company disregards the rules of the business in B.C.

He said in an interview on Sunday that he hoped the transportation board would stick by its previous 2012 decision that forced Uber out of the province.

Mr. Meggs said an executive from Uber came to see him two weeks ago to talk about the company's interest in coming back to Vancouver. He said the executive did not spell out exactly how it wanted to proceed. "It was a good conversation."

Mr. Meggs, a member of the Vision Vancouver party that has a majority on council, said there will be a motion to council this week to freeze the status quo for six months while staff study the issues – past the election in November. "How they want to proceed here and when I am not exactly sure," he said.

Mr. Meggs said it's clear that people in the Vancouver region want more transportation options, but it's unclear how to meet that need in the current regulatory environment while also maintaining standards. He said the issue is larger than Vancouver given that each municipality in the Lower Mainland has its own rules on taxis. 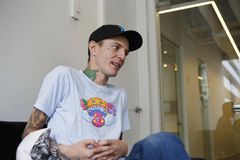