Diner en Blanc (DEB) is a chic, tightly regimented, all-white picnic that began in Paris 28 years ago as a small, slightly subversive flash mob of friends who gathered in unexpected public spaces. But since 2012, when the founder’s son moved the international headquarters to Montreal, the event has grown into a massive franchise business held in 70 cities around the world. The fifth annual Vancouver rendition was held last week at Concord Pacific Place. Hosted by The Social Concierge and attended by 6,000 people (up from 4,000 last year), it was the second largest DEB after Paris.

Ce Soir Noir (CSN) is a casual, DIY, all-black picnic launched last year by two Vancouver artists, George Vergette and Graeme Berglund, as a tongue-in-cheek alternative to the perceived elitist trappings of its all-white counterpart. Held on the same night as DEB Vancouver, in the Downtown Eastside’s Crab Park, CSN was touted as “an ad hoc, barely-even-organized, family-friendly event.” The organizers expected a couple of dozen people; 1,500 showed up. Due to popular demand, the event has been resurrected this year, but this time it’s being held two weeks after DEB, on Aug. 30, “so no one has to choose sides.”

I can understand why CSN has chosen to downplay the rivalry between the two events. That wouldn’t be very sporting. The whole point of organizing a parallel picnic that doesn’t entail carefully guarded secret locations, initiations through friends, online ticketing, membership fees, waiting lists, rules, regulations, pre-ordered food baskets, staged performances, security barriers and corporate sponsorship is to be community oriented and all-inclusive.

But after attending this year’s DEB – a bloated, sprawling, sweaty, chaotic, overhyped buildup to one briefly sparkling Instagram moment – I think it deserves a takedown. Guess that leaves it up to me.

First, let me be clear: I wanted to love it. This was my third time in attendance. The first year, in 2012, I was completely charmed and wrote a column singing the night’s praises. Sure, I was a VIP guest and sat with the organizers. But I still lugged my table and chairs to the secret site at the appointed hour and was swept up in the communal joie de vivre. 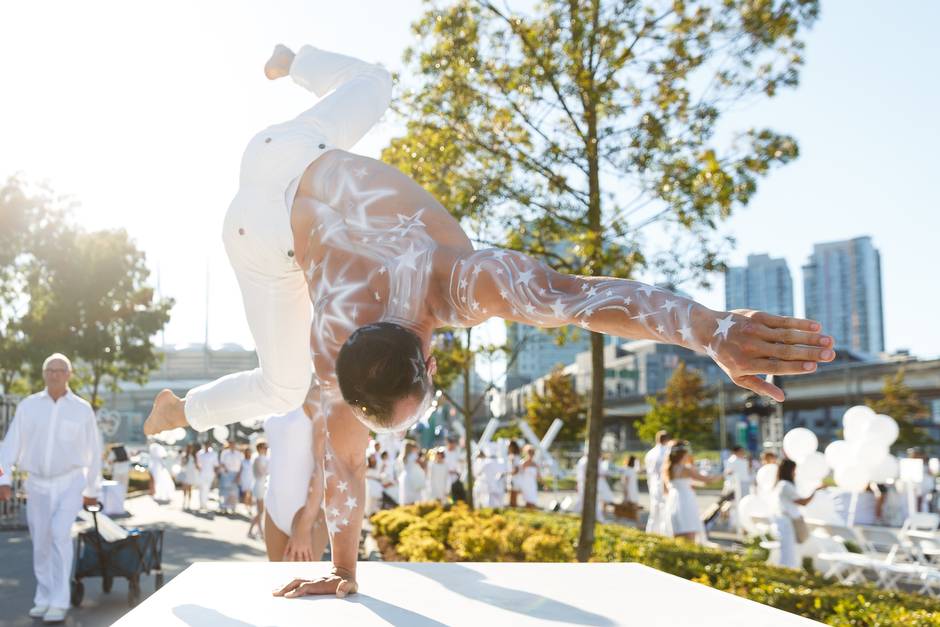 My second time attending, for the event’s third edition in 2014, was a little disappointing. The artistic component – Vancouver Opera singers, aerial acrobats – was outstanding. And the venue, David Lam Park, was breathtaking. But I was segregated in a VIP lounge, and later seated at a fully equipped table with people I didn’t know. Some might appreciate not having to bring all the props (and the free drinks), but I felt like I hadn’t really participated and was missing out on all the fun in the cheap seats.

So this year, when a friend who was acting as a table leader sent an invitation, I jumped at the opportunity to dine among the masses without any special privileges. (Yeah, I know that sounds horribly elitist.)

It wasn’t as cheap as I thought, even though my tablemate, Vicky, and I (the tickets come in pairs) brought our own picnic. In addition to the two-person participation fee ($74, plus tax), we had to pay an annual membership fee ($8, plus an $8 transaction charge, plus tax). We also pre-ordered two bottles of entry-level wine because you can’t bring your own ($68.98). Grand total (not counting taxis and food costs): $165.08. 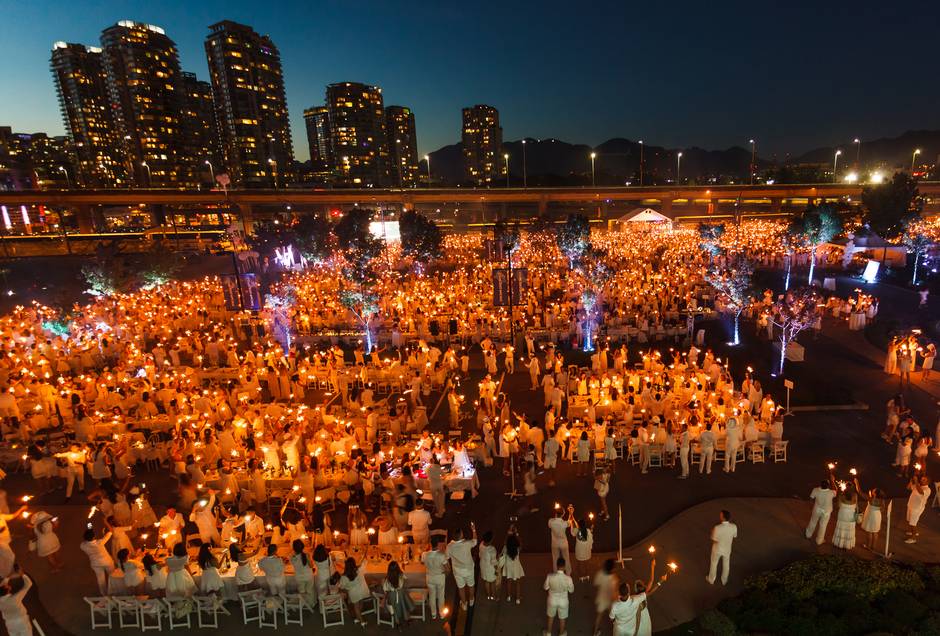 This year's DEB was an overhyped buildup to one briefly sparkling Instagram moment. (Photo by Jonathan Evans)

On the night of the event, we were instructed to meet our group outside Science World. Driving along Pacific Avenue, our hearts sank when we realized that the secret site was Concord Pacific Place. A grimy concrete parking lot?

On the one hand, I think it’s good that the event has mushroomed to 6,000 people. At one time, there were 40,000 people on the wait list. But on the other hand, there are only so many public spaces in Vancouver that can accommodate such a giant gathering. And they’re not the most picturesque.

After waiting around in the sweltering heat for an hour, we were marched into the parking lot and instructed to find our group sign. Find it? Do you know big that parking lot is? It took 20 minutes to find our spot, a little “X” on the asphalt wedged up to one side of the stage with a glorious view of the Georgia Viaduct.

I began setting up our table while Vicky went off to fetch the wine. Then I waited all alone (the entire long table was off fetching wine or food), twiddling my thumbs for about 45 minutes.

There must have been a mass napkin twirl – one of the event’s two major rituals – to commence the meal at some point. But I honestly don’t remember it. Vicky must have still been in the lineup with everyone else.

When we were just about finished eating, the two guys beside us emerged from their wine line and started tucking in. We shared some leftovers and a few laughs. I felt vaguely neighbourly, for a few minutes. But then we got up to wander around and never saw or talked to them again. 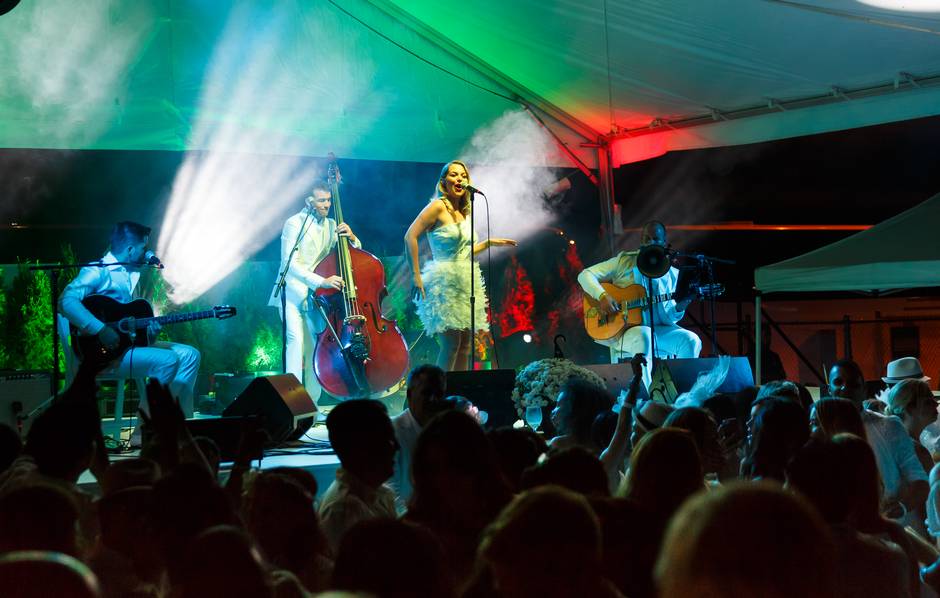 Since 2012, DEB has grown into a massive franchise business held in 70 cities around the world. (Photo by Jonathan Evans)

We took some fun pictures with hunky, tattooed men in masks, and met up with some friends in the lounge area. Ooh, a water view. But we couldn’t get a drink from the bar because you had to pre-order tickets. Apparently, there was a croquet garden set somewhere. Didn’t find it. We did come across quite a few jugglers, acrobats, mimes and burlesque dancers milling around the grounds. (The Vancouver hosts do seem to put more into the production than any other city.)

Then we had to race back to our table for the traditional post-dinner photo op – when everyone lights a sparkler. The mass twinkle was pretty impressive, even in a parking lot.

But is that all there is? Well, there was a post-party party at a nightclub for those willing to spend another $35.

Admittedly, there is a lot we don’t know about Dîner en Blanc. The local hosts are not allowed to disclose any of their costs, sponsorship arrangements or even the number of helpers hired. There may or may not be a charitable donation. Again, they’re not allowed to say because the event is not supposed to be “political” in nature.

The (lack of) charity, for me, was the final straw. Local organizers have the freedom to choose their own corporate sponsors, program the entertainment as elaborately as they see fit and grow the event as grossly large as they like. But the international head office won’t allow them to give a donation to the food bank or some other good cause? That is definitely political, elitist beyond words and an egregious display of opportunistic, mean-spirited capitalism at its very worst.

I talked to Tyson Villeneuve, one of the Vancouver co-founders, on the phone this week. After vigorously defending his event and proudly noting that they received more positive feedback from “loyal guests” this year than in any year previous, he said he was looking forward to attending Ce Soir Noir. Hmm.

I hope he takes advantage of the dark night in Crab Park to reflect on the sad state of Dîner en Blanc’s shallow soul.