The event was a carefully scripted, "women only" lunch at the Delta Town and Country Inn in suburban Vancouver, and the keynote speaker was Christy Clark. The B.C. Premier's Aug. 3 address was one of her few public appearances since she returned from the Halifax premiers' conference in late July.

Outside the Delta hotel, a dozen reporters and camera crews waited to question her about the proposed Enbridge pipeline: an issue that had come to define Ms. Clark in recent weeks and which many Liberal partisans see as their best hope for re-election.

After Ms. Clark confidently strode to the microphone in Halifax and demanded a cut of Alberta cash as one of five conditions even to consider allowing the oil pipeline across her province – many expected her tough talk to continue, and for her to outline her next steps.

But back home, Ms. Clark has ceded the stage to Alberta Premier Alison Redford and the federal government; Prime Minister Stephen Harper and his senior B.C. minister, James Moore, spoke to local media in the past week about how important the pipeline project is to Canada's future.

Ms. Redford is expected to address the issue at a Vancouver conference on Monday.

But when Ms. Clark's Delta speech ended, she scurried out the back door into a window-tinted van with an RCMP driver while reporters clustered around what turned out to be a decoy vehicle in front.

Have things got so bad for the Liberals that their leader is consigned to getaway cars?

Poll results since the Halifax meetings continue to be grim, and questions about Ms. Clark's leadership – temporarily dormant – have resurfaced.

"There are always some people grumbling," said former attorney-general Barry Penner, who stepped aside from the Clark government earlier this year.

"But I hear a lot of people expressing concern, especially among business people. They ask me: 'What's going on? What's going to happen?' It's clear that this government has a steep hill to climb."

Former solicitor general Kash Heed, now a Liberal backbencher and an independent voice within caucus, was one of those mystified by Ms. Clark's decision not to capitalize on her strong performance at the premiers' meeting.

"As a leader, when you bring such public notice to these kind of contentious issues, you need to be around to explain your rationale," Mr. Heed said.

The Liberals are in more political trouble than ever before in the 11 years they have governed the province, most of them under Gordon Campbell.

Ms. Clark, a cabinet minister turned radio hotline host, won last year's contest to replace Mr. Campbell, campaigning as a fresh voice committed to doing things differently. The voters weren't impressed. Polls taken immediately after the premiers' conference showed Ms. Clark's approval rating still at just 25 per cent. And when Ms. Clark made the 4,500-kilometre journey from Nova Scotia back to her native province, she all but disappeared from the limelight, opting for small meetings in the B.C. interior, available only to local media.

Press secretary Mike Morton told a Globe and Mail reporter that the Premier was beyond cellphone range.

"She owned the podium. She should have stayed on it," observed Vancouver realtor and power broker Bob Rennie, director of Rennie Marketing Systems and a long-time Clark fan, who still believes the pipeline issue could be a turning point for Ms. Clark.

Angus Reid pollster Mario Canseco is also perplexed by the Premier's low-key public profile since she dominated the premiers meeting by confronting Alberta and stalking out of discussions on a national energy plan.

"… It's difficult to assess why she's suddenly so hard to find. I really can't figure it out," Mr. Canseco said.

Since the premiers' meeting, the Premier's only relatively prominent public appearance was on the religious TV talk show 100 Huntley Street, on which Ms. Clark, a devout Anglican, professed faith in the Bible to see her through tough times.

The Premier's backers, however, continue to believe that by resurrecting B.C.'s long political tradition of bashing those beyond its boundaries, Ms. Clark's pipeline posturing will yet bring back voters who have shifted their supportto other parties.

"This has come along, and it's very good for her," exulted John Reynolds, former B.C. Tory MP and Conservative House leader, who organized a lucrative fundraising dinner for Ms. Clark in June.

"With this issue, we'd get even more than last time. We'd fill the place."

He isn't concerned by her vanishing act, noting she has clearly outlined the issue and launched the debate on B.C.'s approach. "It's a good time to step back a little bit, and let it soak in with people."

Stockwell Day, another former federal Conservative prominent in the Clark camp, believes the Premier's stand is a smart political move that will reap benefits in the long run.

It's the right thing to do, as well, added Mr. Day, who had a long political career in oil-rich Alberta before jumping to the federal scene.

"You can do something for the right reasons and still be political. You can have that happy coincidence. I do believe that's the case here," he said. "As people more and more understand the seriousness of the position she's taking, I think that will find resonance with British Columbians, for sure."

But Mr. Canseco of Angus Reid said he believes many Liberals can't help but be disappointed that taking on Alberta over the pipeline proposal didn't boost the Premier's popularity. "I really think they were expecting something bigger would happen." 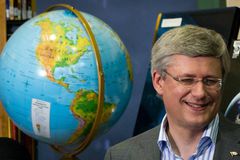 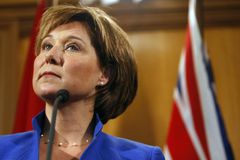 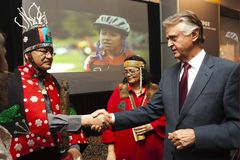 Follow Ian Bailey and Rod Mickleburgh on Twitter @ianabailey @rodmickleburgh
Report an error Editorial code of conduct
Due to technical reasons, we have temporarily removed commenting from our articles. We hope to have this fixed soon. Thank you for your patience. If you are looking to give feedback on our new site, please send it along to feedback@globeandmail.com. If you want to write a letter to the editor, please forward to letters@globeandmail.com.
Comments